A study noting how the non-Muslim Pakistanis are forced to leave their homes, jobs, businesses, and even extended families to save their lives under a clear and present danger 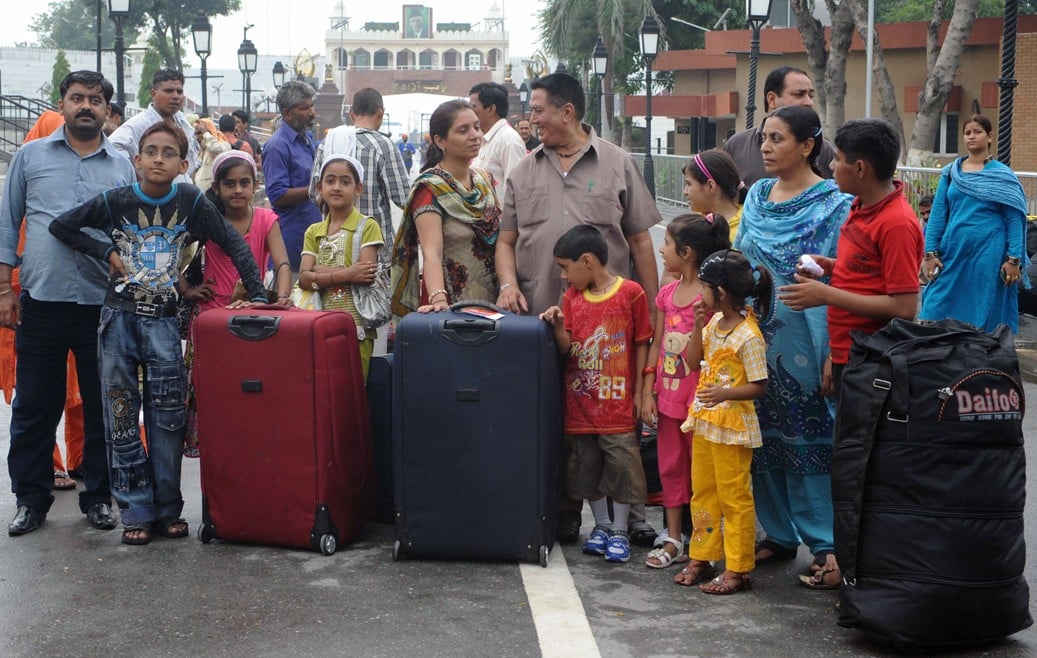 Social research is scarce in Pakistan and good qualitative research is even scarcer. The universities that do have departments of sociology or anthropology conduct MPhil- or PhD-level research studies but that hardly see the light of the day. One can find some good studies gathering dust in the library shelves and the academic departments usually do not have the resources to get them published.

The social research studies that are funded by foreign donors normally have a greater chance of enjoying a broader outreach but mostly they suffer from lack of social research expertise among the NGO professionals posing as researchers. Still, once in a while a good piece of research comes up and one such example is Migration of Minorities in Pakistan: A Case Study Approach conducted by AWAZ, a UKaid-funded project.

This study focuses on the migration of non-Muslim Pakistanis who are forced to leave their homes, jobs, businesses, and even extended families to save their lives under a clear and present danger from the extremist elements in the society at large. The study finds that such migration takes many shapes such as from one town to another or from Pakistan to another country. The worst part of this is the fact that the minorities are persecuted by the people around them and the state functionaries are either unwilling or unable to help.

Though the state of Pakistan does not use systematic violence against minorities, it has enacted laws and has transformed the education system into a bigot-producing factory churning out individuals that are full of hate against other religions and sects. Blaming RAW and other ‘external hands’ has become a handy excuse and the state still refuses to admits its own mistakes -- or rather deliberate decisions -- that have led the country to this mess and have encouraged offenses against the minorities.

The study tries to unfold the circumstances under which non-Muslims are compelled to migrate to other places and highlights a growing culture of intolerance in the country. That Pakistan has become one of the most fragile states in the world is a moot point but its increasing susceptibility to violence is not. Despite ever-expanding security budgets, the state’s ability to enforce its writ has significantly weakened and key state institutions are in a perpetual state of self-glorification; and if this continues the most vulnerable citizens will be even more prone to violence and exploitation.

The non-Muslim population in the country has dwindled from around 20 per cent in the pre-partition days to less than four per cent today. That means if we assume Pakistan’s population to be around 200 million in 2015, there must be at least eight million non-Muslims living in the country. Out of which the largest chunk is in Punjab where around 2.5 per cent of the population is Christian, which means there must be at least 2.5 million Christians living in Punjab. While the bulk of Pakistan’s Hindu population lives in Sindh, the Khyber Pakhtunkhwa province emerges as the most homogenous with only around half a per cent population being non-Muslims.

The study under discussion traces the history of violence against minorities back to anti-Ahmadi riots in the early 1950s. But overall in the first 25 years of Pakistan’s existence religious extremist did not pose a serious threat. The official declaration of Ahmadis as non-Muslims by the Parliament of Pakistan during ZA Bhutto’s government was a watershed moment that defined the future course of religious persecution under state patronage and legal sanction.

Then General Zia’s martial law and his attempts to prolong his military dictatorship in the guise of Islamisation further entrenched religious intolerance. General Zia’s promotion of orthodox religiosity had the full backing of the entire military establishment thanks to the three pillars of faith, unity, and discipline that were attributed to Jinnah and used shamelessly to provide a canopy of principles emanating from the founder of Pakistan.

Despite ever-expanding security budgets, the state’s ability to enforce its writ has significantly weakened and key state institutions are in a perpetual state of self-glorification.

These three pillars have served the establishment well to crush any differences. When faith becomes a defining force, it is easier to proclaim your own faith as the supreme guide and all other faiths can be squeezed into a pulp. When unity is used to curb diversity, it leads to a uniformed pattern of thinking that doesn’t tolerate multiplicity or plurality of ideas. The same applies to discipline, when it makes mandatory for all rank and file to obey the orders even if they are bound to steer the country to a destructive direction as happened when General Yahya Khan’s orders were followed to launch a military operation against the majority party and again when General Zia’s instructions were implemented in letter and spirit by all echelons of the military hierarchy in the name of discipline.

The establishment of thousands of religious seminaries across Pakistan during Gen Zia’s 11-year rule produced millions of imbeciles in the coming decades having full confidence in their own brand of Sunni Islam. In 1984, when Gen Zia enforced Ordinance XX that prohibited Ahmadis from ‘indulging in anti-Islamic activities’ he paved the way for this community to be barred  not only from using certain forms of address and greeting but also prohibited their calls to prayers.

The study mentions that in 30 years -- from 1984 to 2014 -- as many as 3680 Ahmadis have been booked for offences such as displaying the Kalima or ‘posing as Muslims.’ The entire population of Rabwah amounting to around 60,000 people has been charged twice under Section 298-C of Pakistan Penal Code for repairing their place of worship.

When Gen Zia introduced amendments to the Penal Code by introducing Sections 295-B in 1982 and 295-C in 1986, he was the Chief of the Army Staff and self-appointed president of Pakistan after a highly controversial referendum conducted with the help of the state machinery. These amendments made certain derogatory offences punishable by death. Interestingly, the amendments do not contain the words ‘willfully’ or ‘on purpose’ to probe into the allegations if there was any mala fide intent or not. This omission has made it much easier to apply this law even if there was no intent to defame.

These amendments have prompted a surge in registered cases. In the 60 years prior to these amendments (since 1927), there were only 14 cases of blasphemy, but after 1986 over a 1,000 cases have been registered. The study says that only in 2011, 80 blasphemy cases were registered -- Ahmadis and Christians being the main victims of the law and, in most cases, personal rivalries against non-Muslims have played a pivotal role.

The civil and military bureaucrats as well as politicians who innocently mourn the demise of tolerance in our society should cast a critical eye on their own past and ask what their faith, unity, and discipline to support poorly conceived policies has done to this country and resulted in a systematic persecution of religious minorities. Examples are too many to count, be it the recent attack on a bus full of Shia Ismailis or the mob violence in 2009 against Christians in Gojra in which over a hundred houses were burned; be it the attack on an Ahmadi place of worship in Lahore in May 2010 in which around a hundred people were killed and over 125 injured or the attack on a church in Peshawar that killed over a hundred people. All are a manifestation of failed and misdirected policies that the state of Pakistan has followed and forcibly implemented over the decades.

Though it is difficult to ascertain the exact number of non-Muslims migrating, the AWAZ study tells us that the most commonly reported migration is of the Hindu community in Sindh leaving for India. Dr Ramesh Kumar Vankwani of the PML-N told the National Assembly in May 2012 that around 5,000 Hindus were migrating from Pakistan to India every year. Similarly, the UNHCR reported in May 2014 that the number of Christian and Ahmadi asylum seekers arriving in Sri Lanka from Pakistan increased from just 100 in 2012 to around 1500 in 2013; more or less the same number was reported from Thailand.

The Pakistani Sikh community reported that only in 2014 around 175 Sikhs moved to India. If all these numbers are put together, about 21 non-Muslims appear to be leaving Pakistan every day.

Out-migration is not an easy option for most of the persecuted non-Muslim families and many of them end up relocating to another town to save their lives in an emergency, but securing their belongings is not always possible. This internal migration is creating ‘ghettos’ for religious minorities who try to feel safe in an area which is predominantly inhibited by their own people. But even this is turning out to be an increasingly dangerous option as became evident by the recent attack on a bus of Ismailis in Karachi. Alazhar Garden, which is an Ismaili community housing project, was considered a safe haven by many Ismailis but little did they know that even an exclusive bus service would not protect them; rather it made them an easier target.

Though the Awaz study is a good attempt to gather qualitative data on a topic that largely remains unexplored, it fails on some vital accounts. For example, there is no executive summary to begin with. How can a research study be approved for publication by the editors (if there was any) without an executive summary? It seems that the researchers were not aware of the difference between an Introduction and a Summary. In the section on data and methodology neither research objectives nor research questions are clearly outlined, it simply talks about the broad focus of the research and moves on.

In the absence of clearly defined research questions it becomes challenging for the reader to assess if the original research questions have been addressed or the report is just wondering around with wide strokes. The case study approach used for this study appears to be appropriate and the selection of cases from Christian, Ahmadi, Hindu, and Sikh families has enabled the researchers to go deeper into the circumstances that prompt the decision to migrate.

In all, 14 cases have been discussed in the study with 40 interviews in Punjab and the KP. The study is small in nature and excludes Sindh and Balochistan entirely because the project does not work there. Keeping in mind the reluctance of the persecuted people to speak up and discuss their problems, it is admirable that the researchers were able to elicit so much information from their selected cases. The choice of Rahimyar Khan for research on three Hindu families is eye-opening, for most of the people think that it is only in Sindh that the Hindu families are targeted.

The study highlights that legitimisation by the state has left the non-Muslim communities with little recourse to systems of justice -- Ordinance XX remains the most devastating in scope against the minorities and has opened the floodgates of complaints against vulnerable citizens accused of a wide range of offences.

One wishes a similar -- and perhaps broader -- study is conducted to include the persecution and violence against Shias (Asna Ashris, Hazaras, Ismailis, and Bohris) that probably are the worst victims of extremism from Gilgit to Gawadar.

With a recent directive from the Punjab Higher Education Department to universities discouraging them to allow research on sensitive topics, it is highly unlikely that such a study can be conducted by Pakistani universities.

The king of gold