Ski is the limit

Insha Afsar, the 14-year old from Muzaffarabad, lost a leg in the 2005 Kashmir earthquake but has become a skiing sensation as she dominates the slopes 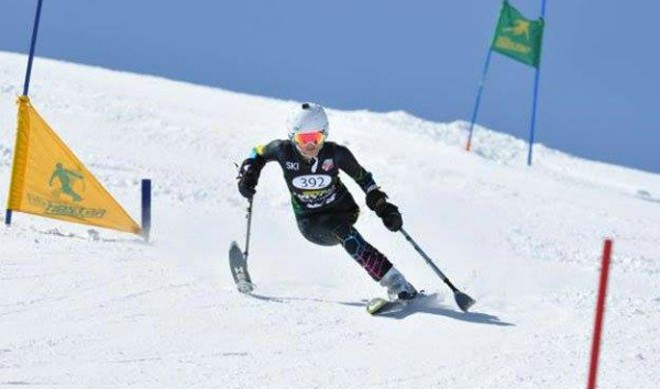 Some weeks ago, I happened to sit at the same table as a bright-eyed, long-haired young girl with a wide smile. The only non-desis in the room were the white couple with her. I assumed they were doctors or medical representatives in that hall full of physicians and their families.

But a pair of crutches resting on the table indicated that the girl was Insha Afsar, the 14-year old from Muzaffarabad who lost a leg in the 2005 Kashmir earthquake but has become a skiing sensation as she dominates the slopes -- on one leg.

As Insha sat between her host parents, Rebecca Lambert and Ted Bent, I enjoyed watching them interact, whispering to each other during the proceedings, clearly sharing a loving relationship and bond. AsInsha tried to memorise her brief talk before going up to receive her award, Ted told me she was nervous about speaking.

The eldest of three (now four) siblings, Insha was at school when the earthquake struck in October 2005. The building collapsed and her leg was crushed in the rubble. Her family at home was safe. A photograph of Insha published in Time magazine led Healing the Children NE, a Connecticut non-profit medical agency, to take up her case.

They coordinated her travel to the USA, where the Shiner’s Hospital in Springfield, MA, committed to build her a prosthesis. Rebecca and Ted, whose son had gone on to college, volunteered to host Insha and her father Afsar Khan.

Rebecca and Ted subsequently sponsored her next two visits to the USA to get the prosthesis fitted. Insha’s father accompanied her the first couple of times.

Insha’s dream is to compete in the winter Paralympics. However, Pakistan does not compete in the games and she cannot represent USA because she is not a citizen….

Ted has written about how they adapted to each other -- the unlettered, devout Muslim shopkeeper from a village in Muzaffarabad and the equally devout, highly-educated urban Christian couple in Connecticut. The story underlines shared humanity, and how open-mindedness, mutual respect, and being well-intentioned, help overcome differences and lead to love.

Insha’s left leg, originally amputated above the knee, had to be removed altogether when gangrene set in due to lack of proper care in Pakistan. When she first came to the USA, she was already deft with hopping on one leg. She was fitted with prosthesis but prefers her new light-weightcrutches that allow her more mobility.

At APPNE’s meeting, when her name was called out, she stood up, grabbed her elbow crutches and deftly swung herself over to the podium, alithe figure in a bright red dress, black leggings, and one smart high-heeled shoe ("I love wearing heels," she told me later with her wide smile). Rebecca walked along with her for moral support.

On stage, looking out over the full hall Insha confessed her nervousness. "I am a good skier but not a good public speaker," she said self-effacingly. But she was impressively articulate, and rightly proud of her accomplishments. These include coming in just three seconds behind Melanie Schwartz the Bronze winner from the Sochi Paralympics at a recent national competition.

Insha’s dream is to compete in the winter Paralympics. However, Pakistan does not compete in the games and she cannot represent USA because she is not a citizen.

She has been living in the USA with Ted and Rebecca for the last five years on a student visa. They sent her to the same private school their son attended. She now goes to Berkshire, a private boarding school that she chose because of its ski team. She is on the team with two-legged skiers.

"Seeing how good she is, we began thinking that this could be an opportunity for her," says Ted.

They are now looking into ways of fulfilling Insha’s dream of skiing in the Paralympics.

However, this may not be a very practical way forward for Insha given that the Olympics and Paralympics require years of training and money, neither of which Pakistan can provide her.

Insha still has three more high school years to complete in the USA. Over the last five years, her host parents have devoted considerable time and resources to ensure that she gets the coaching she needs and to get her to the races. Most important for them is her studies.

"Our hope for Insha is that she grows up an educated woman with a champion skier’s high profile that will allow her to help and represent Pakistan intelligently," says Ted Bent.

If she obtains US citizenship, as a dual citizen of Pakistan and the USA, she will be able to qualify and train with Paralympic Team USA, at which point, notes Bent, "the team will pay her considerable expenses. Both Pakistan and America can take pride in her performance. She’ll always be a Pakistani, even if formally skiing for Team USA."

Ski is the limit