43 Pakistanis on that bus

How to save the state from collapsing 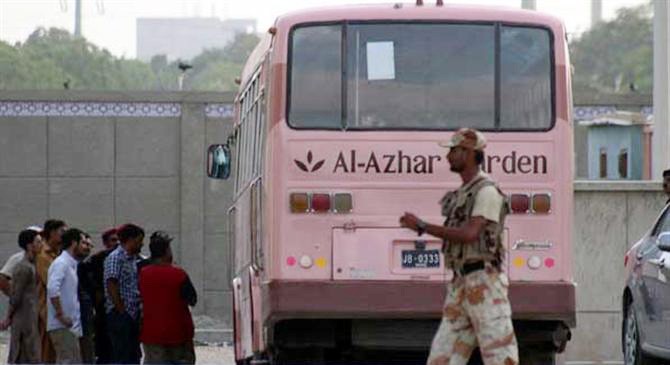 Most of them were shot at close range. A single bullet to the head. This is how the police described the brutal killings in Karachi on May 13 -- a day already soaked in the memory of blood. The manner of these brutal attacks is telling. The terrorists did not attack and fire randomly. They put in single bullets to the head -- a hallmark of executions -- as if the murder was in response to a conviction, a crime. And these enemies of the state made it clear that in their eyes our Ismaili brethren, among others, are guilty by virtue of their faith.

The state of Pakistan, and its citizens, must not see this as an instance of sectarian violence. Shockingly enough, some commentators have argued that our sectarian problem is different from our terrorism problem. But not for those who are creating this mayhem. Violence is a friend to violence and bigotry thrives on bigotry. Once the minds meet, so do aims and potential targets. Our sectarian problem and our terrorism problem have now seen an irreversible confluence. This is an attack on the state and its plurality -- at least whatever is left of it.

In 1968, Samuel Huntington published his enormously important work "Political order in changing societies" -- this work would later spur some of Francis Fukuyama’s best work, including his latest two volume treatise. Huntington began his book with a most telling observation: "The most important political distinction among countries concerns not their form of government but their degree of government."

Huntington went on to argue that political organisation and mature political institutions were the two greatest factors that contribute to stability of a polity. He criticised his own government, the United States, for its failure to realise that economic development tells us almost nothing about the development of the culture of politics in a country. Huntington realised that urbanisation, industrialisation, new technologies, economic growth interfere with not the economics of a country but its politics. And unless institutions and procedures adapt to the changing landscape, political turmoil results.

Pakistan has the right form of government but it is the degree of government that is weak. And when the degree of government is weak then an ideology that distorts religion, while linking political aims to it, offers people alternatives -- a weak state is hopelessly ill-equipped to withstand a barrage of violence and hatred. The state has not been able to come up with a coherent narrative that allows the state to develop its authority -- the link with religion and state’s failure to respond to religious bigotry has produced a violent counter-narrative where your sect (not just religion) defines your ‘right to life’.

A depressing thought considering how the Constitution refers to the ‘right to life’ -- words on paper for the vulnerable and persecuted.

When people in Pakistan talk about controlling hate speech, they often forget that they are calling on a weak state to do it. A weak state which has trouble enforcing existing laws will, of course, announce with great fanfare that it is taking on additional responsibilities. But its failure should be obvious in advance. New laws will not improve our politics, institutions and procedures. Practices will.

No number of laws could have saved those 43 Pakistanis who died on that bus. No number of military courts will deter such murderous violence. But effective state action, driven by the political will to counter religious bigotry at its inception could have gone a long way. Groups like the ISIS and their partners are out to destroy our states as they exist. And the state must overcome its shortcomings. Religion is a constantly available sledgehammer that everyone can use in this country. Despite repeated failure, the state has been apologetic about coming up with a pluralist discourse. It is high time that this changes.

Again, enacting new laws will not change this. The state will need to actually change its discourse. It cannot fall prey to the right-wing’s rhetoric that religion trumps all. The continued existence of this state is in question -- we are faced with an existential threat -- and the state must respond. This will require a mix of short term as well as long term measures. Even though the National Action Plan was announced, it is staggering that the finance minister cannot get his house in order regarding the funds.

Of course the elephant in the room, the civil-military imbalance, is linked to this issue. But the military and political leadership will not have a hard time agreeing on the necessity to save Pakistan. Their problem is that the bigotry is so deep-rooted and the state structures so weak that few have any idea how to set things right.

We can wish that heads of major political parties adopt a zero tolerance approach towards violence.We can pray that rogue elements within the state infrastructure will stop protecting religious extremists. But we are beyond hoping and praying now. Our only hope of survival is that we change our narrative and we embrace it whole-heartedly. Apologetic statements mourning lives, week after week, will not do us any good. Of course the change in narrative will take time but that process must begin now. A more inclusive discourse has to be adopted by the state and all its institutions. We must announce that while many in this country love their religion, there are thousands who are distorting it to corrupt people and destroy lives. Instead of banning any speech that we find inconvenient, we actually have to do the hard part -- we have to marginalise the hate-filled narrative through our discourse.

Standing guard during the latest massacre in Karachi was not a gunman but an ideology that breeds and thrives on hatred. Bleeding in a corner was the idea that Pakistan can be and is a home for all its citizens -- and that religion does not define your right to life. We can either stop the bleeding, inject new life into that idea of ‘our’ Pakistan or we can sit back and watch the state collapse -- till it is our time to go.

Hopefully enough people can stand up and say: this state will not collapse. Not on my watch.

43 Pakistanis on that bus