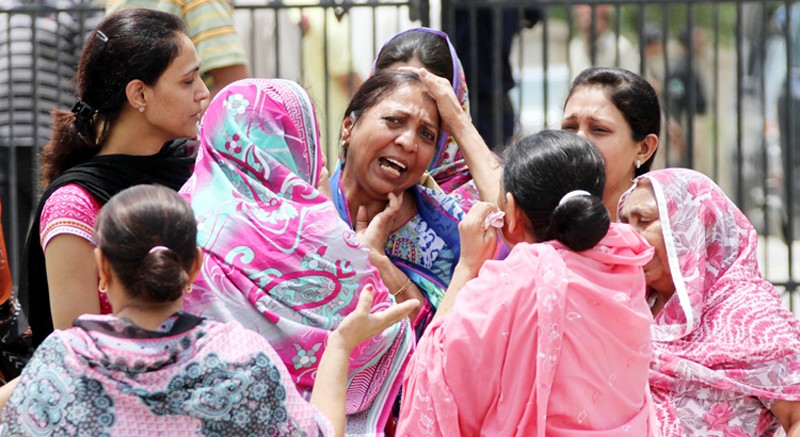 "You’re Shia, you have no rights," says my friend.

We all laugh, myself included.

"Just as 45 Ismailis found out yesterday," adds my friend, who is also a Shia.

None of us laugh this time.

The fact is there is something profoundly disturbing about the fact that we crack "Dead Shia" jokes the same way we talk about the weather. What is even more worrying, however, is that not only do we crack these jokes, Shias like me and some of my friends also find them funny. It is immensely sad that we have become so desensitised to violence against minorities that we can joke about it. It is equally troubling that we live in a society where quite literally all you can do about the genocide of entire communities is to crack pathetic jokes about it.

But we all already know this. The fact is that 45 more people are dead, and the world is still turning. The electricity is still going, Shahbaz Sharif is still micromanaging, the army is still fighting, and everyone, everyone is waiting. Waiting to see who gets attacked next, wondering if it will be a bomb, or an ambush, or a target killing.

And there is absolutely nothing new about any of this. It’s just another day in the life of a Pakistani.

Typically, Facebook statuses have been put up, deep sorrow has been expressed and much anti-terrorist gusto has been displayed. But the fact is, that most of us are silent. Some out of apathy, others they don’t know what there is left to say. We’ve said it all before -- from pronouncing death on terrorists, to blaming the ISI, to shaming Pakistani people… we’re right about some of those things, and dead wrong about others, but there are only so many times that we can hold protests that no one covers and write articles that no one reads. The fact is, we’ve said all we can, and we’re tired and frustrated.

But that’s no ones fault except our own. You see, we’ve done a lot of talking, but not much else. We’ve shamed the ISI, but we haven’t stood up to them. We’ve called on the Pakistani moderate to take action, but have never actually bothered to do something ourselves.

We have nothing left to lose any more. We certainly have no dignity left, if we ever did at all. We don’t even seem to have our lives any more.

Because, you see, as much as we pretend to be brave and strong, we’re not. For all our machismo when it comes to hating America or Israel or the West in general, we know better than to pick fights with them. Sure, we curse them, but as with most other things we threaten to do, our bark is worse than our bite. It’s the little guys we pick on. The ones who refuse to fight back with violence, because they are too noble to do so, like Sabeen Mahmud, and the ones who cannot fight back, because they are outnumbered, like the Ismailis. We are too scared to challenge the state, or too unwilling to give up the comfort and satisfaction of political discourse over chai in the drawing room. Either way, we are afraid of what we have to lose if we stand up and take action.

So the only thing I can say is this:

We have nothing left to lose any more. We, as a nation, have neither riches nor status. We certainly have no dignity left, if we ever did at all. We don’t even seem to have our lives any more.

It has not. Violence begets violence, and will continue to do so. How long will being Sunni protect us? It didn’t protect Sabeen Mahmud, just as being Muslim didn’t protect 45 Ismailis. How long before everyone is a fair game?

In the end, it’s this simple. We could be next.