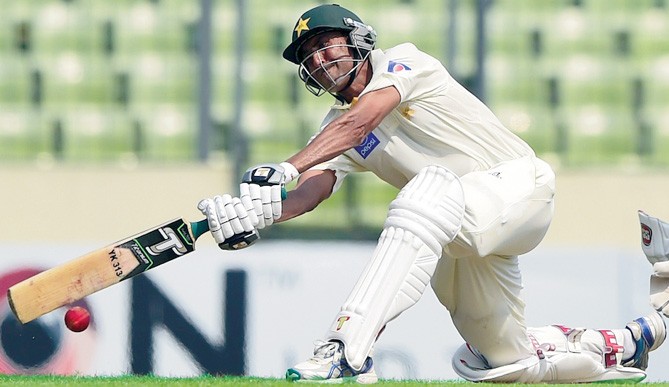 The failure of Pakistani openers is nothing new for the management and the Pakistani spectators, but the middle order had been strong in the ‘70s, ‘80s and until mid ‘90s, thanks to players like Zaheer Abbas and Javed Miandad.

From the mid-‘90s to 2007 the middle order was given strength by such players as Inzamam-ul-Haq and Mohammad Yousuf. Later Younis Khan joined the duo.

Inzamam-ul-Haq and Mohammad Yousuf have retired, and now Younis Khan along with skipper Misbah-ul-Haq is the backbone of Pakistan batting in Test cricket.

He has the distinction of scoring a century in each innings of a Test against Australia; and he is only the second batsman to hit three Test hundreds in as many innings against the Aussies.

The 37-year-old Younis Khan is the first Pakistani and the 12th batsmen overall to score a hundred against all Test opponents. Those who achieved this milestone before him are Gary Kirsten and Jacques Kallis of South Africa, Sri Lanka’s Marvan Atapattu, Mahela Jayawardene and Kumar Sangakkara, Australia’s Steve Waugh, Ricky Ponting and Adam Gilchrist, India’s Sachin Tendulkar and Rahul Dravid and West Indian Brian Lara.

A triple-hundred, a double-hundred against India in India, and a brilliant double century against Australia last year leave no doubt about his quality and class.

He is also one of the most successful fielders for Pakistan.

After scoring the hundred against Australia last year in UAE, Younis said he was proud to become the first Pakistani to score a hundred against all nine Test opponents and equal the record of most hundreds for his country.

Younis has emerged as a master of the fourth innings. Among players with 1000 or more fourth-innings Test runs, his average 52.18 is among the highest.

Younis’ prowess is widely acknowledged in the cricket world. India’s VVS Laxman once said Younis was one of the best he played against.

Younis was dropped from the ODI side which put his place in Pakistan’s squad for the 2015 World Cup in serious doubt.

In June last year the PCB   released a list of 31 contracted players. It put Younis, one of the most senior players, with Umar Akmal, Umar Gul and Ahmed Shehzad in Category ‘B’, while Misbah-ul-Haq, Mohammad Hafeez, Saeed Ajmal, Shahid Afridi and Junaid Khan were placed in Category ‘A’.

The logic behind this decision was that only those who play all the three formats were considered for the ‘A’ category. As Younis has retired from the Twenty20 format, he was offered category ‘B’ contract. Later, the board rectified its mistake and offered Category ‘A’ contract to him.

Younis has played in 98 Tests, 264 ODIs and 25 T20 Internationals. He has led Pakistan in nine Tests, 21 ODIs and eight Twenty20 matches. Pakistan won the Twenty20 World Cup in 2009 in England when he was captain. After T20 World Cup win he announced his retirement from shortest version of the game.

The ever-smiling right-hander from Mardan remains a permanent fixture in the Test squad. He aims to retire on his own terms rather than be dropped by the selectors.