The much-touted project of the extension of the Punjab Assembly building goes on in fits and starts, despite a lapse of nine years 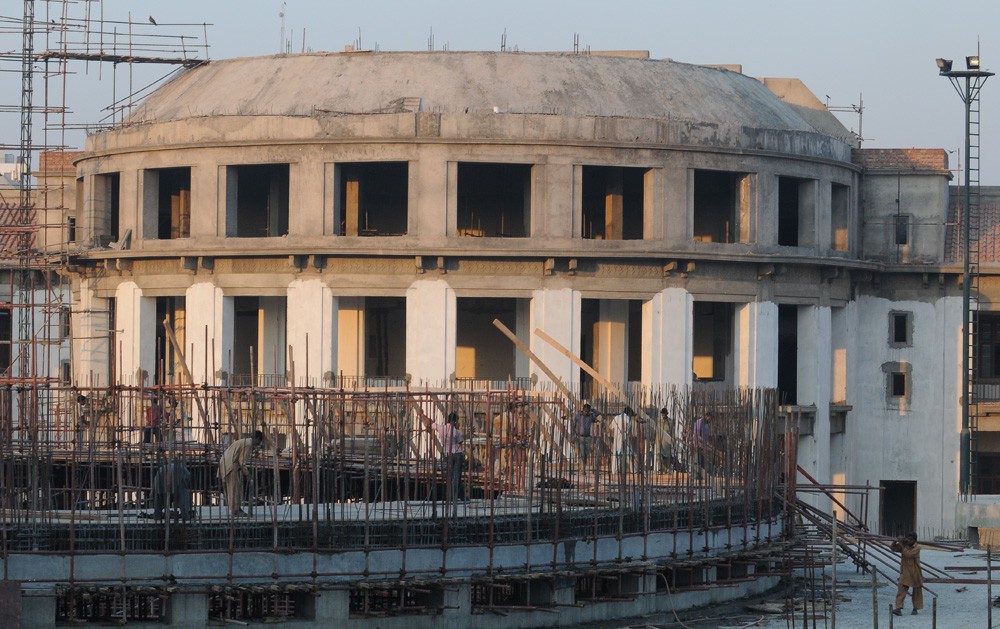 The grey structures erected in the premises of the Punjab Assembly building have long been under construction. Practically started in the year 2006, the structures are only a part of the provincial government’s much-touted -- not to mention, much-delayed -- Assembly extension project that involves replicating the building with more than 150 rooms and the extension of the current building.

Work on the project has been sporadic, attracting criticism from various quarters, leading some to doubt the sincerity of the government.

Quite expectedly, Secretary Punjab Assembly Rai Muzammil attributes the delay in completion of the projects to "shortage of funds and other issues."

He goes on to explain, "An allocation of Rs100 million was made in the current financial year and now the work is in swift progress."

All told, the extension of the Assembly building which was built circa 1935, includes a new session hall with a seating capacity for 500 members and two galleries for visitors and media with a capacity for 500 people each. The existing hall can only accommodate 271 members and 200 visitors, including the media folk.

The new hall shall also have two lobbies, one of which shall be used for voting purposes. Besides, four emergency exits, with facilities of stairs and elevators, are also being built.

Additionally, the building extension shall house the speaker’s chamber and security rooms that will be equipped with facilities such as a state-of-the-art conference address system, a biometric attendance system, Wifi internet, CCTV installations and a sound system, all of which shall cost Rs200 million (approx.). The express purpose is to bring the Assembly building on par with any modern-day structure of the world.

The four-storey replica of the Punjab Assembly building, right opposite the current one, is being constructed on Shahrah-e-Quaid-e-Azam (The Mall Rd) in Roman architecture.

In this connection, a sum of Rs10 million alone has been allocated for the project in the current fiscal year.

Facing the Montgomery Road, the four-storey replica of the Assembly building, right opposite the current one, is being constructed on Shahrah-e-Quaid-e-Azam (The Mall Rd) in Roman architecture. It will incorporate more than 150 rooms built on four floors. (The old building boasts only two storeys.)

The exterior of the new building will be a replica of the old structure, though the interior will be different.

There is a 200,000 square feet covered area that has been earmarked as secretariat for as many as 40 ministries for whom the same number of rooms has been built.

Reportedly, the building shall also accommodate the offices of the secretary, the additional secretary and the deputy secretary, along with their staff. It will help the current secretariat share its burden.

The building shall have chambers for the speaker, the chief minister and the opposition leader; a conference room, four meeting halls, a waiting area, a fire room and security rooms along with a cafeteria. Rs300 million (approx.) are expected to be spent on the development.

If a senior official of the buildings department is believe, 95 per cent of the grey structure of both the projects is complete. Even the piping and the sewerage work inside the buildings has also been completed.

The areas not yet complete include the lawns, the pathways, water supply and sewerage system.

According to the official, the project got delayed because of a shortage of funds, security issues, etc. But it will take no more than a year to complete the work, provided the full amount (due to the project) is released.

However, the official refrains from giving a timeframe for the completion of the project. "We do not know if the funds for the project shall be allocated in the next financial year," he says, requesting anonymity.