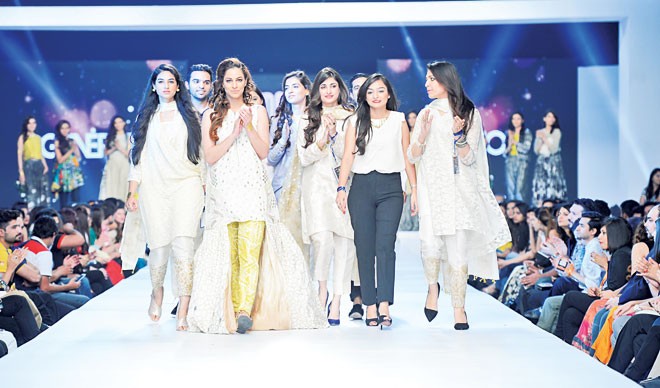 The massive red brick structure is imposing yet grand; trees that have lived through the rise and fall of decades of fashion trends line the courtyard and the lush green patch of greenery outside conjures up visions of lazy Sunday picnics with the family.

The external serenity belies the frenzy of activity inside. This is the Generation factory, the breeding ground for one of the country’s oldest and most prolific ready-to-wear brands and with close to 700 workers housed inside, it’s easy to understand why Director Khadija Rehman says she hardly gets a minute to herself once she walks in through the iron gates.

From overseeing the design team - young men and women, mostly graduates of the PIFD who conceive, create and experiment using everything from computer screens to swatches of fabric to sketching boards as their canvas - to supervising the karighars who painstakingly hand craft each stitch of the embroidery and embellishment that’s part of the brand’s more formal pieces, Khadija does it all. She can often be seen reviewing samples to approve for production or discussing a stitch that went awry with the master saab who heads the tailoring unit; there’s never a dull moment in your life if you happen to be heading the design and marketing side of a prolific mass retail brand.

Armed with a degree in fashion design from London, and an MBA to boot, Khadija is following in the footsteps of her parents Nosheen and Saad Rehman, who first set up Generation over three decades ago. The brand’s origin story is as straightforward as its philosophy of providing off-the-rack fashionable clothing to the Pakistani woman at an affordable price.

"My grandfather and father had a garments export business, and when exports crashed back in the 80s, my father decided to explore the local market. My mother came on board as the designer and Generation was born," says Khadija.

This was 1983, the era of disco and of knuckle gloves, a time when Pakistani society hadn’t completely cloistered itself into the bubble of Islamization heralded by Zia, and the introduction of trendy and smart clothes off-the-rack clothes was a godsend for the urban woman.

"Our product range in the 80s was quite experimental and fun," says Khadija. "Back then, Generation was less about embellishment and more about cuts and silhouettes and drapes - whether it was big shoulders or interesting shalwars."

With Parisian designers flown in regularly to design Generation’s seasonal collections, it’s not surprising that what was on offer was considered ground-breaking and cutting-edge for its time. The brand maintained a firm hold over the ready-to-wear market for the next two decades as women, tiring of the darzi culture and looking for quick fixes to their sartorial needs, continued to walk in and pick up stitched ensembles.

In the recent past, however, the brand seemed to lose the plot as its designs sunk into the commercial yet safe zone with nothing fashion-forward to offer to its loyal clientele across the country. But that seems to be changing, for Generation’s last few collections have marked a move back towards its experimental and stylish roots.

Khadija chalks the dip in the brand’s growth cycle to internal changes and expansion as the company took on more employees and streamlined its processes to finally settle into a structured routine.
The unassuming heir to the throne will never admit it but her entrance into the family business is part of the reason the tide is finally turning. She’s young, candid and brings a refreshingly organic yet modern mindset to the company.

Dressed in a simple white kurta, her waist-long hair unkempt and loose that she constantly plays with in an effort to hide her discomfort at having to talk about herself, Khadija carries none of the gloss and narcissism that one normally associates with fashion designers. In fact she candidly admits to "hating fashion while growing up", finding it pretentious and shallow. London helped change that perception.

"I had grown up seeing designers from Paris in and out of our house so my idea of fashion was shaped by big Parisian fashion houses that were exclusive and high end. In London, the vibe is different, fashion rises up from the streets and I realized it could be inclusive."

The notion of fashion as being democratic is what appeals to Khadija and tied in with the brand’s mass commercial appeal, it is a powerful idea. It is all too easy for labels backed by big production set-ups to churn out designs that will sell well while offering nothing new in terms of trends. It takes guts to test out new ideas, fully aware that you might fail, but knowing that one successful experiment will mean translating high-end fashion into a more accessible and affordable commodity.

The brand’s recent outing at the PFDC Sunsilk Fashion Week was an illustration of how this can work magic if executed right. Generation’s I See You collection was an interesting mix of textures - pairing organic cotton and denim with luxe silks and organzas. The silhouettes were more adventurous than what we’ve seen the brand do before, with voluminous pants, waistcoats and crop tops that straddled an intelligent line between the east and the west. Many of the trends spotted on the ramp - from the animal and insect prints to the paint-splattered motif, the sleeveless jackets and the asymmetrical hems - have been done by high-end designers in their recent luxury/pret collections. But it is Generation’s affordable line - priced under 10k - that has the potential to penetrate the market the most and influence high street fashion.

While its willingness to embrace the innovative has breathed new life into the company, it is careful not to alienate its more conservative customers. Generation, after all, is a brand that really is generational in its appeal. Women, their mothers and their grandmothers have shopped here during its three decades of existence and a sharp departure from its commercial philosophy has the potential to play havoc with customer loyalty.

Khadija recalls how they got a taste of that brand loyalty recently when the Lahore store underwent some cosmetic interior changes.

"We took off the old wooden door that had been the store entrance for years and replaced it with a more modern-looking glass door. Customers were very upset, complaining that we had taken down something that was part of their childhood memories. The protests were so strong, we reinstalled the old door!"

Under its various product lines, Generation has made the effort to appeal to a variety of tastes and preferences. So while the Generation Classic and Formal ranges will have longer hemlines and more traditional silhouettes, Generation Flo caters to a younger, more adventurous mindset with its interesting separates and western pieces.

With as many as six different ranges and new collections coming in weekly for each range at the brand’s seven outlets nationwide, the production set-up is a vast and complex tightrope of meeting quantity requirements and ensuring quality control. At the same time, there is an effort to bring something new to the table every time. Currently, the inspirations range from intricate Japanese embroidery techniques to Moroccan architecture. Not all experiments are successful - Khadija points to bundles of a washed-out blue fabric stacked along one wall.

"That’s a denim line that we are working on. It has some production issues and needed to be recalled. But once we sort it out, it is going to be a very fresh and interesting take on the fabric."

With so much competition in the market, ‘the me-too brands’ as Khadija calls them, it is Generation’s commitment to its ready-to-wear philosophy that helps it stand out.

"Our product portfolio is vast. Other high street brands focus on print, while print is just one of our many ranges. We know what we are good at and we won’t diversify into areas that don’t fall in line with our philosophy."

Hence, you won’t be seeing a Generation fabric line anytime soon, despite fabric being a lucrative market at the moment. "Unstitched fabric goes against our very ethos - our vision is to provide smart, wearable and affordable clothes to women off-the-rack," she explains.

With three new stores in the pipeline, two in Lahore and one in Pindi, Generation is poised to enter a new era of expansion, not just in terms of presence but also when it comes to fashion-forwardness. "We’ve planned the trajectory of our growth carefully because we want to retain control over quality and creativity. Which is why we don’t franchise also; all Generation stores are owned by us. Yes, there was a time when the brand went undercover and the competition took over. But we are back in the game now."

Where do we go from here?