The artist and more

At a Harvard talk, Jimmy Engineer talks about the various aspects of his life, as an artist, social worker, human rights and peace activist 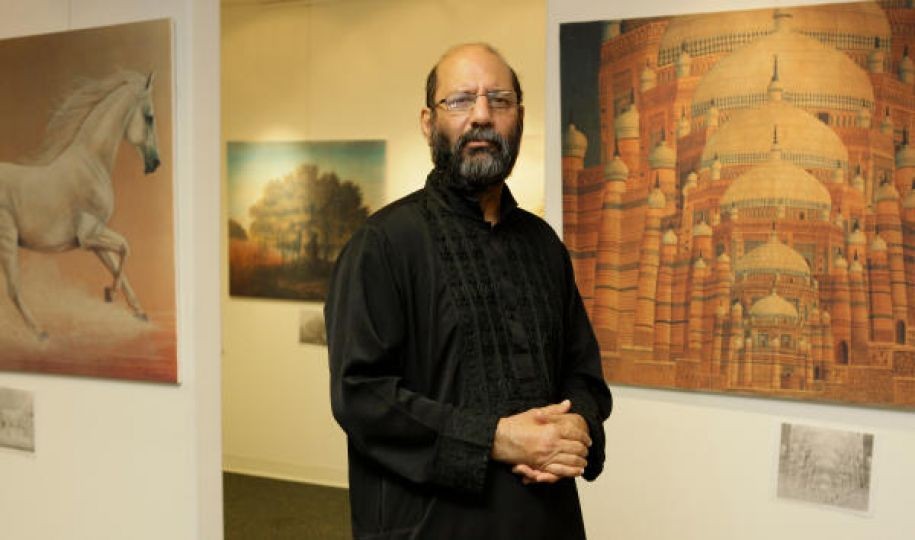 "There is a long list of people who are activists and who take up causes who get killed. It’s an endless list, and it’s a senseless list," says Jimmy Engineer.

I’m talking to this Pakistani artist and philanthropist on the phone, having him met a few times in the Boston area. Based in Karachi, he’s visiting the USA, currently in Houston where his parents live. I’ve called to ask if he heard about the murder of activist-entrepreneur Sabeen Mahmud in Karachi.

He puts the tragedy in perspective as part of the perennial struggle between good and evil. "There will always be those who try to improve things and raise a voice to create awareness. There will always be those who want to destroy them. This happens everywhere in the world. Nature also takes its toll. Along with all the positive, there’s always a negative, like the Nepal earthquake."

Sabeen herself well understood herself and exemplified this philosophy, accepting that negativity and evil exist but yet continuing to strive to do what is possible on a personal level. Life is a never-ending struggle and we each need to do what we can.

I knew little about Jimmy Engineer except that he is an artist who does charity work and walks for causes. I learnt more about this tall, soft-spoken, somewhat enigmatic figure with a greying beard at a talk he gave at the Harvard Graduate School of Education a couple of weeks ago. His host, expatriate Pakistani businessman Masood Shaikh, moderated the talk, saying he wants to spread the goodness, the positive image of Pakistan that Jimmy Engineer represents.

The website www.jimmyengineer.com tells us that he has made over 2,000 original paintings, 1,000 calligraphies and 350,000 prints, many in private collections in over 50 countries. His most famous series are the ones on Partition, Allama Iqbal and architecture. Jimmy Engineer has held more than 60 art exhibitions, led over 100 walks for noble causes and arranged more than 140 awareness programmes for handicapped, blind and orphaned children.

None of this prepares you for the quiet aura of peace Jimmy Engineer emanates, or for his complex simplicity. He terms himself as "a servant of the people and of Pakistan".

At the Harvard talk, he spoke about various aspects of his life, as an artist, a social worker, a human rights activist and a peace activist. For each, he invokes different parts of his personality - idealism, compassion, aggression, pacifism.

His hearing disorder, he says reflectively, makes him one of the special people, those with mental or physical disabilities whose cause he takes up.

"Growing up, I always listened to my inner voice. In the 1970s, my sufi master told me, you’ll always remain a servant of Pakistan. I am proud to be that."

This includes arranging outings and events for special children, like receptions at posh hotels and booking cinema halls, trying to get people to see them as part of society.

At the Fourth Global Vigil for the Peshawar school massacre, Jimmy stood quietly at Boston Commons in solidarity with a small crowd of mostly Pakistani students and community members. Asked to speak, he was brief. "Terrorists have no religion or faith. They are worse than animals. Words are not enough to condemn their actions." He called for Pakistan to act against them decisively.

A couple of days later, he seemed content on the side-lines of the annual dinner meeting of the American Pakistani Physicians of New England, happy to be acknowledged but seeking no further attention. The keynote speaker was the Karachi-based lawyer and activist Jibran Nasir.

The activist-lawyer and activist-artist had connected at a dinner at the house of activist-doctors Saira Hussain and Ehsun Mirza. They share a dream: for an inclusive, democratic Pakistan where everyone can live without discrimination or fear.

The lion story didn’t come up then. It was at the Harvard talk that PhD candidate Mariam Chughtai asked Jimmy Engineer about it. As a student at Sacred Heart School in Lahore, she saw a video of him in a cage with a roaring lion. "I was very young, and I don’t remember it well, but I am left with a message of faith overcoming fear".

That was in Bahawalpur during his Karachi to Khyber walk in 1994, recalled Jimmy. His inner voice had sent him on this solitary, winding, year-long journey to improve himself, to learn how ordinary people live, walk and suffer, to feel their pain. He exposed himself to the elements - hot sun, cold winds -- and stayed at homes or slept on the roadside along the way.

Sometimes he would step off the road and sit meditatively on the ground. Locals were astonished that village dogs, normally fierce towards strangers, did not attack him. Neither did snakes. "They said I was doing some magic. I said no, I am doing nothing."

One morning, some locals came to the house he was staying at and took him to Bahawalpur Zoo. They wanted to him to go into a lion’s cage, and had engaged a man with a video camera who told Jimmy, "You may not be around to see this, but this video may make me very rich".

Jimmy said he would be happy for him if that happened. He gave a small speech to the camera, then approached the lion’s cage. The keeper refused to open it, but overcame his hesitation when money changed hands.

"I felt no fear, nothing. I went into the cage. The lion circled around me then lay down. To me he looked like a puppy. We were at peace, both of us."

This was an anti-climax. The lion is too tame, said the crowd. They took Jimmy to a cage with three lionesses, who also sat down quietly.

The disappointed dismissed these as educated lions," Jimmy remembers with a hint of humour. "Let’s take him to the uneducated ones."

Some ten younger lions in the next cage ran away from him.

"I told them, that’s enough. And I thought, there must be something in me," reflects Jimmy. "Maybe it was my faith in Allah".

Born to a Zoroastrian family in Loralai, Balochistan, he claims all religions as his own, openly stating, to the consternation of the orthodox, "I am a Muslim, a Christian, a Sikh, a Hindu, a Parsi…" and so on.

Once when he was painting the names of Allah on a mural for a company, extremists began to threaten him, objecting to a Parsi undertaking this task. He stood firm on his stance: "Allah belongs to everyone."

The story of how he became a humanist transcending all religions involves some suspension of disbelief. At age six he became very ill, with two failed kidneys. "Doctors gave me three months to live. Thirty, forty, other children with me died.  But I lived. And I became healthier and stronger than ever before."

Doctors were mystified. "Nature gave me two new kidneys," is Jimmy’s explanation. This lies behind his resolve to "to always help people, to give back to nature what it gave me."

Although the surname is "Engineer" (indicating a family profession), the boy named Jimmy (not a nickname) was more interested in art. Even at age four he was always painting. Teachers would catch him drawing in math and science classes. His parents compromised by sending him to study design at the National College of Arts in Lahore then headed by the legendary Shakir Ali.

The drawing bug wouldn’t leave him. Jimmy transferred to the fine arts department. He would often stay there all night. "Don’t you have a home to go to," the staff would ask.

"I wanted to change the lives of people through art," says Jimmy, who left NCA in his final year before obtaining the degree. It’s not something he brings up unless asked, "as parents don’t like it".

His Partition series from the 1970s emerged from dreams he had about that cataclysmic time. It was another dream in January 2001 that led him to undertake his India-Pakistan peace walk later that year.

"I woke up knowing that I would do this walk in November, from Islamabad to New Delhi," he says. "In March, I designed a special dress, with the Indian and Pakistani flags on the chest."

After 9/11, people asked if that was the event he was going to walk for. It wasn’t. There were tensions between India and Pakistan in October but that wasn’t it either. Jimmy sent a letter to Gen. Musharraf via a brigadier saying he wanted to do India-Pakistan peace walk in November. "I didn’t want any security but I didn’t want to be stopped. I never got any reply." The brigadier he checked with told him it was fine.

Jimmy started his solo walk on November 30, 2001 from Islamabad. "As I walked, people would ask me, will there be war? I had faith that there would be no war and I said so. People felt satisfied when they heard that."

At Lahore, journalists asked him to wait before crossing as Eid was coming up. "A gas station owner said I could stay with him, so I stayed there for four days."

After Eid, he visited the shrine of Hazrat Data Ganj Baksh and crossed the River Ravi but sat down at the border and announced that he would stop there. "My sixth sense told me I should not cross. My purpose was to wake up the people, and that purpose had been served."

Going over, he said, would risk having India send him back before he could reach Delhi. That would make things worse. "It would also be an insult to my country, and I didn’t want that."

"The media wanted me to cross, to make breaking news. But it did not suit my nature. I have taken up many controversial topics, but I never like to use controversy to get attention."

As he said then, and continues to say, "99 per cent of the people of India and Pakistan don’t have a problem with each other. The problem will be resolved the day the one per cent agrees."

He gave his dress with the India-Pakistan flags to Nirmala Despande for the Gandhi Foundation.

The artist and more