Losses can be minimised by acting in time 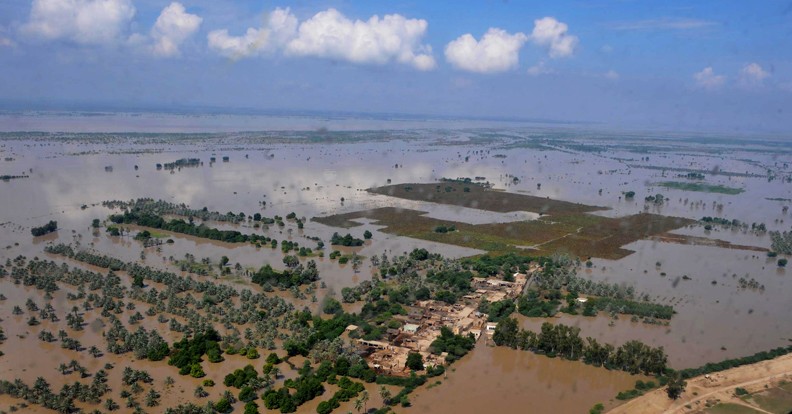 February and March witnessed abnormal weather all over the country. There was heavy and continuous downpour with thunder and hailstorms in different areas. Balochistan and Kashmir witnessed heavy rains and flash flooding. Rains in central Punjab have damaged wheat crop on a large area. "I have lost 6 acres of total 18 I had cultivated wheat on due to abnormal heavy rains in February and March," says Muzammil Gujjar, a middle aged farmer from Abhiyala Gujjaran, a village of Sialkot district.

This means the poor farmer has lost 30 per cent of his yield even before it gets mature. "Last year I had lost a major part of my paddy crop due to flooding," says Gujjar. He fears for his future crop as he thinks that like abnormal rains there is a definite possibility of inundation in August September.

Pakistan is witnessing unpredictable weather for the last five years. There have been floods, heavy rains, hailstorms and thunderstorms that are damaging our agriculture at large scale every year -- the main pillar of our economy. Besides, millions of livestock, thousands of houses and hundreds of human lives have been lost due to weather upsets.

Once these were called unexpected happenings but the frequency tells us that these are no more unexpected for us and we should be prepared for such happenings as natural disasters cannot be stopped but the damages can be minimised through proper preparedness. But we didn’t learn any lesson from the disaster.

No special measures at any level are evident to protect the masses in case of a disaster. "Every year, pre-monsoon preparedness exercise starts in June and it will be there at the same time this year as well," says Muhammad Akram Anjum, Chief Meteorologist Flood Forecasting Division (FFD). "We will check our equipment and its working during that time," Anjum further adds. He told TNS that the possibility of flood can never be ruled out but it cannot be assessed before June. Last year some quarters claimed that early warning system was not efficient and became the reason of heavy damages that could have been minimised had the system been efficient. No particular steps have been reported to enhance the efficiency of the early warning system.

The government of Pakistan has made an excellent move in recent past by reinstating the Federal Ministry of Climate Change. The ministry should be given full charge to cope with the biggest challenge of recent times.

The damages caused by the climatic disasters are going beyond control. 2010 flooding displaced 20 million people, in 2013, 4 million people were affected by heavy rains in different areas. 2014 witnessed crops at large area inundated. There might be some serious damages in 2015 if serious measures are not taken.

According to a German watch report, we are facing damages worth 21.5 billion annually. There is a dire need to implement the policy on climate change drafted in 2011. The policy has the potential to advise/implement both short and long term plans to reduce the impacts of manmade climatic disasters.

"We are working on fast pace for implementation of our plans and setting our priorities," says Mushahidullah, Federal Minister for Climate Change. "We cannot stop disasters but can minimise their impact with effective and timely management and Ministry of Climate Change is taking serious steps in this regard," he further adds.

National Disaster Management Authority (NDMA) has assessed the impact of 2014 flood and has given a two-year plan (2014-16). But the only step an NDMA’s member was able to tell TNS about was the approval of installing a radar system in Karachi with the cooperation of Japan.

"The radar system will cover Karachi, Badin and Thatta areas and will be able to indicate any cyclone activity in sea 60 hours away," says Ahmad Kamal, member NDMA. Kamal further informs that another project for effective forecast of river flow has also been approved and will be installed with the cooperation of Japan, but there is no timeframe for the said projects. He says that these plans are the top priorities in the 10-year disaster risk management plan. Kamal also says that Ministry of Water and Power, in consultation with all concerned departments including NDMA, has revised the SoPs for Mangla Dam on the lines of last year as the disaster was reduced with proper management of water flow from the dam.

A flood management committee led by the chief engineer of Mangla Dam has been constituted. Representatives from Pakistan Army, DCO Office Jhelum, AJKDMA, PDMA and Indus Water Commissioner for Pakistan office are also in the committee. Member NDMA says that a video link has also been proposed for effective communication between FFD Lahore and Mangla to take timely decisions in case of an emergency. Indus Water Commissioner for Pakistan has also been requested to revise the procedure for data collection from India during the flood season for proper and timely management accordingly.

The above mentioned steps are the part of a long term plan but keeping in view the situation there is a dire need of short term planning as well and that is not in place. This is also to mention that the farmers in central Punjab had severe reservations on Mangla Dam water flow management last year and had complained that time consumed in filling Mangla Dam to its full capacity had created pressure on the rivers and added to the severity of devastation in catchment areas. Again if the dam’s water flow is managed on the same lines, there is a possibility of damage on same level.

Chairman Federal Flood Commission Asjad Imtiaz Ali had some other important engagements than flood management and could not provide any details of flood management plan despite being contacted several times.

Engineer Alamgir, in charge Flood Cell of Federal Flood Commission, says that flood protection and flood fighting is the responsibility of provincial irrigation departments. "Rs 1 billion had been allocated for normal/emergency flood programme against the demand of Rs5 billion for the year 2014-15 ending in June. A demand of Rs5.5 billion has been made for 2015-16." The amount will be allocated for all five provinces and tribal areas. "A 10-year comprehensive plan for flood resilience is being worked out and for short term arrangements, the FPP-4 will be finalised by the end of this month and we would be able to reveal the arrangements for flood protection and their cost," Alamgir adds. It is to mention that FPP-4 is the 4th Flood Protection Plan and as a routine matter every plan of this series lasts for 10 years.

NESPAK representative Syed Tajammal Hussain says that the plan is yet to be finalised. "The plan might get us to 2016 to be implemented after necessary approvals from different government departments," Tajammal adds. So the plan has nothing to do with any flood if it occurs in 2015.