Opposition to Kalabagh Dam comes in political and nationalist guises, limiting the possibility of an informed and fruitful debate 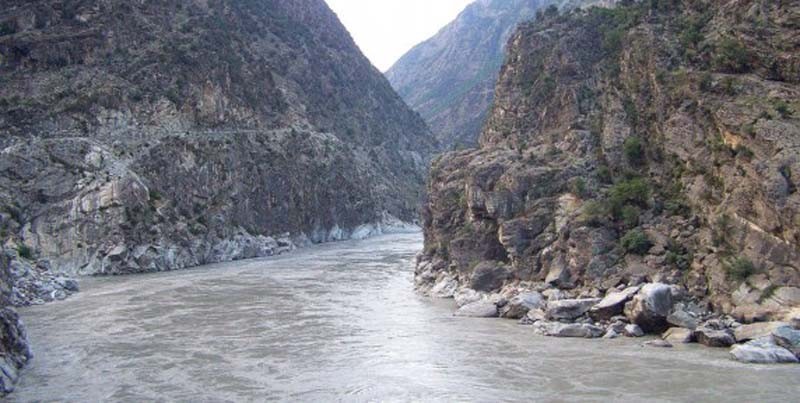 In a post-colonial country like Pakistan, majority of the people have no option but to swing like a pendulum between two opposing poles -- both defined by elite conflicts within the ruling classes. Debate on every issue gets stuck in binaries, so much so that there is no room for a third option.

On world water day last week, political analysts and some policy makers generated a pointless debate over the construction of new dams, specially Kalabagh Dam to conserve water and increasing the storage capacity of country for agriculture and other purposes. Every one presented own ambiguous figures to deny the opposing claim.

The Kalabagh Dam issue is made to appear so complicated that no one is willing to hear the opposite argument for healthy debate. The controversy regarding the Kalabagh Dam is a result of improper relevant information and distrust among the federating units. Adolf Hitler’s propaganda team once said "If you tell a lie big enough and keep repeating it, people will eventually come to believe it." One could apply this quote on the binaries within our debate, and the ruling class conflicts that dominate the understanding of various issues in Pakistan. Instead, we will consider the ways in which the issue has been misunderstood, and give a scientific and social context to each position.

The arguments forwarded for and against the construction of Kalabagh Dam are often non-serious and irrational to the point of disbelief. Some political forces seem to be opposing the dam because of their past grievances which have nothing to do with the pros or cons of the dam itself. This is the case with the views of political forces from Balochistan, and is evident in the resolutions passed by the Balochistan Assembly. Some political actors proclaim that if the water is used to produce electricity, then it won’t have enough energy left in it for growing crops.

In order to understand the situation, we will list and analyse the usual arguments that are given for or against the construction of the dam. It is important to distinguish between the technical, environmental, and social aspects of these various arguments, so that there is no confusion.

What is a dam and reservoir?

A dam is basically a weir constructed against the flow of water so that a sufficient amount of water can be obtained and diverted for irrigation or power generation. Whereas reservoir are an artificial lake, produced by constructing physical barriers across flowing rivers, which allow the water to pool and be used for various purposes. The volume of water stored in reservoirs worldwide is estimated to be 4,286 km3 (Groom bridge and Jenkins, 1998). Generally dam and reservoir are suitably constructed in the hilly gorges and trenches because such areas are suitable due to the naturally constructed boundary walls for reservoirs.

We have ‘newer’ diagnostic procedures and tests that can provide important information about the extent and seriousness of medical conditions in time to prevent serious consequences. As these tests become ‘famous’, more and more patients demand such testing often without good reason.

The Kalabagh Dam site is a naturally feasible location for building a water reservoir on the Indus River -- a few miles upstream from Mianwali district of Punjab. At this site, Indus comes down from the hilly areas to the Punjab plains. This is an old project which has been under serious consideration since the 1960s. The dam became controversial during the rule of General Ziaul Haq, and has been politicised ever since.

Dams were a sign of a country’s progress in the 1950s and 1960s worldwide. Different developed countries constructed a large number of hydropower projects over the world’s largest river basin like Nile, Ganga, Amazon, Colorado and Indus etc. After the transboundry water distribution treaty between Pakistan and India known as Indus Water Treaty of 1960, Pakistan constructed several dams, barrages, and headworks. Irrigation projects linked with these mega construction projects were considered necessary to irrigate barren lands. The increasing energy demands were also met with hydropower.

Dam supporters argue that irrigation projects increase the capacity of our water reservoirs and irrigate thousands of acres of barren land. This in turn makes the country self-sufficient in agriculture and prevents future food crises. Supporters also argue that the dam will produce 3600 megawatts (MWs) of electricity, which will reduce the energy shortfall and consequently solve the energy crisis that we face today.

At first, this point of view seems entirely reasonable. However, many ask whether the construction of the dam is the only solution to these problems, or whether we need to restructure the irrigation and water system along modern designs. Water is a precious natural resource and it needs to be used efficiently for the good of humanity. When designing policies, we need to keep in mind that the availability of water for future generations depends on how we use this resource. We must model our irrigation system according to modern principles and focus on water saving as well. Similarly, we need to consider other sources of power generation while considering the cheap electricity production capability of hydropower.

The arguments against the construction of the dam usually come from two provinces: Khyber Pakhtunkhwa (KPK) and Sindh. Objections from Sindh are based on fears that the dam will render Sindh barren. Objections from KPK are based on fears that certain districts of the province will be flooded if the dam is constructed. Nationalist forces which oppose the dam usually consider the issue a matter of national pride and oppression of nationalities. They also highlight the negative technical aspects of the dam.

If we list the technical criticisms of Kalabagh Dam, they read as follows:

The dam will flood Nowshera and areas in its vicinity.

The lower part of the Indus River will not have enough water, instead devastating the economic lives of the people living in these parts.

The Indus River does not have that much water, and if the dam is constructed then the lower half of the river will be negatively affected, and result in an environmental disaster.

The backwater pressure from the dam will affect the Ghazi Brotha hydro power project.

Thousands of acres of land around the dam will be affected by water logging and salinity.

The dam will displace a large number of people.

Similarly, there are other technical arguments that constitute the grounds for dam opposition. But, all these technical problems can be resolved, and alternatives can be imagined. The problem is that opposition to the dam comes in political and nationalist guises, which limits the possibility of an informed and fruitful debate. If the problems were only technical in nature then it wouldn’t have been difficult to make the correct decision on the issue.

From my point of view, climate change is the most serious objection to the construction of big dams -- as a result, they have become controversial across the world. Their construction affects the natural flow of rivers and damages river ecology and affect natural habitat. Two responses dominate among environmental activists. One response challenges the whole project of human progress and wants us to abolish this project and live with nature (it is another thing that their own lives are incomplete without the fruits of modern development and technology). The second response is far healthier one, and speaks of protecting the environment alongside sustainable development and the positive aspects of human development (which provides comfort in the lives of humans).

This trend does not reject every project on the basis of environmental protection, but looks at the Environmental Impact Assessment (EIA) studies, which allow us to determine the net positive and negative impacts of projects. So EIA of Kalabagh Dam and other such type of national level project is carried out by taking reputable expert specially from lower riparian of the Indus basin.

Instead of constructing our own point of view, we often find it easier to choose from an available list of views. This is an unhealthy and non-scientific attitude.

We need to formulate an independent and scientific position to further our politics. I won’t discuss the technical arguments against the dam, as the average reader will find it esoteric and difficult. That is why we need to consider the issue of the construction of the dam in the context of the power crisis. In this regards, we need to build consensus among all provinces.

In any case, the technical aspects that we have discussed and which form the basis of the opposition to the construction of the dam have to do with the dam as a reservoir. That is why we believe that if the dam is built only for the sake of power generation as run of river hydropower station then hopefully Sindh and KPK will not have any objections.

Keeping in view the energy crisis in the country, we need to construct the Kalabagh Dam and other hydropower stations as soon as possible, so that we can increase our power generation capacity based on hydel power, and reduces the dependence on coal and oil-based energy production, which are more harmful to the environment as compared to the hydel power. Instead of spending our foreign exchange reserves on import of carbon-based fuels, we can redirect this money for the provision of basic facilities (education and health) in the country and to reduce the conveyance and distribution losses of water in the oldest ebb irrigation system.

The quantity of water which is lost during the conveyance and distribution and field application system of irrigation is almost 5-6 times more than the reservoir capacity of Kalabagh Dam. Kalabagh Dam must be presented as a hydropower project for the people. Similarly, we must build small dams to harvest fresh rain water locally instead of big reservoirs to irrigate barren lands. Irrigated agriculture land must be realigned along modern lines by promoting drip and sprinkler irrigation to save water and increase the acreage as well as crop productivity. For this the government must work with farmers by giving interest free loan to install drip and sprinkler irrigation system.

Small storage based irrigated agriculture does not damage the environment as badly as big dams. Furthermore, we won’t need to depend on loans from the World Bank and IMF because provincial and local governments can build these projects on their own. If we take the Kalabagh Dam as a hydropower project then the objections by Sindh and Khyber Pakhtunkhwa can be answered since these objections are related to the dam as a large reservoir. If the dam is not used as a water reservoir then there is neither any fear of drowning Khyber Pakhtunkhwa nor of Sindh becoming barren.