With footpath as his school

Meeting Muhammad Ayub, a political worker whose life is spent fighting for rights of the underdog 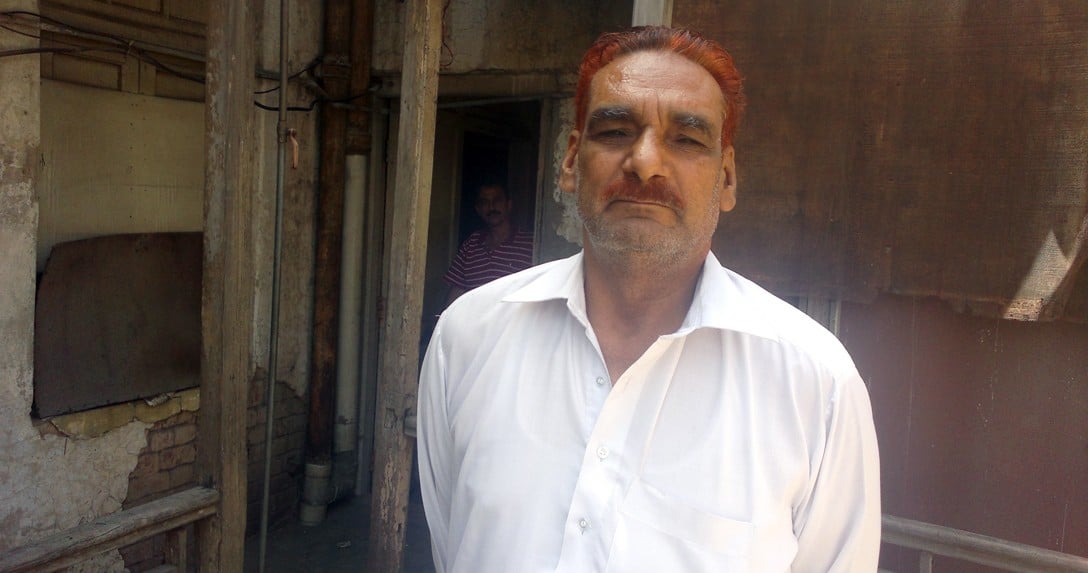 Grubby drug addicts sleeping it off on stairwells and doorways littered with used syringes and cigarette butts are a stark contrast to the stately, whitewashed façade of this colonial-era structure called Bawa Dinga Singh Building that Muhammad Ayub lives in.

Skipping the rough sleepers, this portly, white shalwar-kameez-clad 61-year-old having combed back hennaed hair, with the energy and verve of someone half his age, ushers me upstairs and through a walkway takes me to a ramshackle room he calls his home.

It’s a Sunday -- a holiday. With Ayub’s cot and a small television set stored away during the day, on workdays this rickety room serves as a waiting place for the clients of a lawyer whose chamber adjoins it. But in the evening and daytime on Sundays, Ayub has much more space to himself -- besides the room, a corridor in front of it, and a terrace -- overlooking a stretch of tottering apartments where he hosts birds with cereal grains and water. On weekdays summer nights are hard for him to sweat out. The outdoor units of the cooling systems of the shops on the ground floor keep adding hot air to the baked winds and he has to wait until late in the night to steal a few hours of sleep.

By the time we sit down to talk in the airy covered passage, the bony-faced, hospitable Lahorite has ordered sweet lassi. Taking small and big mouthfuls from the glass, Ayub is quite wordy in reminiscing about his past.

His father came from Head Faqirian, Mandi Bahauddin. His mother’s family lived in Lahore’s Akbari Mandi area. He has no inkling on how they got married. "But we were, and still are not on good terms with our maternal uncles," he says remembering his mother quite fondly. "She worked very hard to raise us four siblings -- three brothers, myself being the youngest, and one sister, youngest of us all."

Ayub’s father assisted Colonel Dr Sami, first in the army’s Punjab Regiment and then at Lady Willingdon Hospital. He says Dr Sami, who later ran a clinic in Gulberg, Lahore, was like a father-figure to him. Dr Sami was amongst the first Pakistani medical practitioners to serve at Lady Willingdon Hospital, the largest maternity hospital in Pakistan located in the heart of Lahore.

Ayub has not lived a settled life since his childhood. For that he blames his travelholic father: "Somebody had ripped him of Rs40,000, quite a large amount then, and he would take his family along wherever he went in pursuit of the conman".

The first time he rebelled was against his teacher. "A young man, I was the monitor of my class (class V) which also included girls taking adult classes. The teacher would ask the girls to press his legs. He wouldn’t listen to my protest. And then one day I made away with his clothes while he was taking bath at a public bathroom. On the teacher’s complaint, the school head teacher beat me black and blue. And that was the last day I went to school. My father, who had quite an imprint on me, said: Let footpath and the world around be your school now. And so it was from then on!"

Ayub would sell ice lollies or do menial work like shoe polishing in the day and go to cantonment railway station in Lahore to sleep away the night. "There I gained a variety of knowledge about life from the runaway boys from different towns, who also slept there," says Ayub.

Perhaps in the same quest Ayub moved to Karachi where he hawked fish pakoras at Manora peninsula there before returning to Lahore for a job that would set his future course.

"I took up bookbinding at Alpha Mian (company) and worked there until its owner died. My father then took me to Nida-i-Millat to work as an ink man at the newspaper’s press. I was shown the door for taking part in a protest against an attack on Pakistan Peoples Party chairman Zulfikar Ali Bhutto in Sanghar in March 1970 during his election campaign," he says munching biscuits a friend of his has served us with tea.

He would bind books at the Royal Park which housed printing presses and offices of film distribution companies, until he got a job as a pressman at the Urdu-language daily Musawaat. There in 1974, Ayub took part in a Pakistan Federal Union of Journalists’ (PFUJ) protest against the arrest of more than 20 senior journalists of Lahore in 1974 by the Z.A Bhutto government. This action started a seven-week protest movement of the journalists and newspaper employees, representatives of factory workers, brick kiln workers and peasants from all over Pakistan who were arrested, jailed and released after a few days. "I was among the media workers who courted arrest a number of times agitating against the action. In solidarity with the journalists, labourers too offered themselves for arrest. It was this gesture of theirs that inspired me to join their struggle," Ayub says.

"In their poverty-wracked communities living in squalid mud huts, stories of illness and withheld wages were commonplace. Whenever a woman labourer gave birth to a child, the owner of brick kiln she worked at would ask whether she had delivered a katoora (male puppy) or a katoori (female puppy). Only three days after maternity she would be back at work," Ayub says with pain visible from his face.

"I would mostly work as their mouthpiece. And so, one day I was arrested. I was released after four days on the intervention of some journalists just before I was to be slapped some fake charges. It was after a sustained struggle that brick kiln workers’wages were raised from 14 rupees to 20.5 rupees a thousand mud bricks."

He recalls a meeting with Kailash Satyarthi, the Nobel laureate, during a labour conference in India. Satyarthi also met Ehsanullah Khan, a journalist who headed the Bhatta Mazdoor Mahaaz (BMM; Brick Kiln Workers Front) he had formed in 1967. Satyarthi, whose organisation Bachpan Bachao Andolan was making waves for having children released from bondage, steered Ehsanullah to create an NGO: the Bonded Labour Liberation Front (BLLF) consolidating all anti-bonded labour activism under its banner.

He warmly talks about late journalist Nisar Osmani and veteran journalist and human rights campaigner Husain Naqi with whom he remained associated with for several years. For the same association, he has been with him at the Human Rights Commission of Pakistan since 1993.

"It was while distributing copies of the HRCP publication Jehd-e-Haq that I was detained in 1998 during the Nawaz Sharif government. The monthly publication carried an article critical of the 15th amendment to the constitution. A Lahore High Court bailiff had got me released then," he says.

Had Ayub relinquished the struggle for press freedom? No, he says and recollects: "It rather went along. General Zia-ul-Haq ousted Bhutto in a military coup in 1977. Crushing political opposition included a crackdown on the media, and the regime arrested and imprisoned dissenting journalists." He shows me a copy of Asiaweek, October 20, 1978, which carries a photograph of him being taken away by the police.

"I had to suffer excruciating torture at a Karachi lockup. They wanted a confession beaten out of me that the PPP had paid me Rs10,000 to court arrest. I told them that I worked in a newspaper and had come to Karachi to join the protest after during hundred rupees out of my salary in advance. Rotating duties, they would beat me with fists and boots everywhere, hang me upside down, and tie up parts of my body to cut off the blood supply. All the while they would hurl abuses at me and threaten me," says Ayub when asked to recall those dark days.

To him, the Zia rule will remain a nightmare for a long time, "The rise of militancy has changed Pakistan for good. And so has the explosion of heroin addiction." These are the gifts from Zia era, he says, pointing to the unkempt, half-starved men; one leaning against the stairs, another sleeping squatting on his haunches; who through the night have smoked their heroin.

With footpath as his school