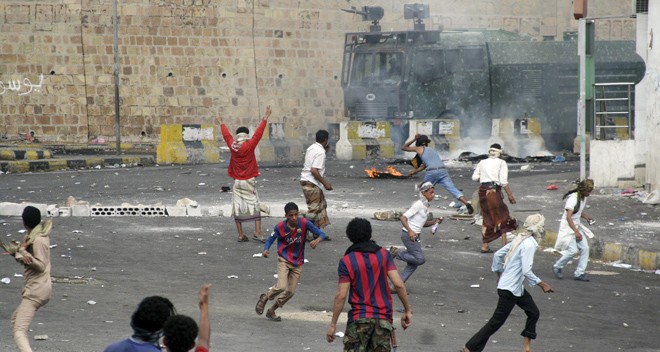 If one were to make a guess, Prime Minister Nawaz Sharif’s heart wants him to offer full support to Saudi Arabia in its hour of need, but he cannot ignore his mind in a country that is intensely polarised and where he is leading a messy democracy.

The military too put the onus of responsibility on the elected government and the parliament when Army Chief General Raheel Sharif told reporters they would abide by the decision to be taken by the joint session of the parliament.

Nawaz Sharif knows well how much Saudi Arabia has helped Pakistan in its numerous hours of trial because this has often happened when he was in power. The dole-outs have been frequent -- oil supply on subsidised rates, cash payments when Islamabad is in familiar dire straits and even a surprising, welcome gift of $1.5 billion last year that raised eyebrows.

Saudi generosity and hospitality has also benefited Pakistan’s ruling elite, including the clergy, as they get invited as royal guests to perform Umra and Hajj and receive precious gifts. Riyadh’s political and diplomatic support for Islamabad has also been constant on issues, such as Kashmir, nuclear programme, and Afghanistan.

Saudi Arabia and the United Arab Emirates were the only countries in the world along with Pakistan that recognised the Taliban regime in Afghanistan in the 1990s because the Saudis invariably followed the Pakistanis’ lead in context of the Afghan conflict.

Pakistan has tried to reciprocate the Saudi help by offering something that it has in abundance -- manpower -- not only civilians who do all kinds of skilled and non-skilled jobs, but also soldiers. Pakistani soldiers have at times remained stationed in Saudi Arabia and even now, according to Defence Minister Khwaja Mohammad Asif, there are around 1,000 of our troops, including trainers, technicians and doctors, deployed in the kingdom.

The defence cooperation between the two countries is old and enduring though its full scale isn’t known. Both sides have tried to keep it under wraps. For this very purpose, Prime Minister Nawaz Sharif declined to reveal the ‘understanding with Saudi rulers’ when he spoke in the parliament during the debate on the issue and said it wasn’t appropriate to disclose details owing to the sensitive nature of the matter. However, such a secretive policy gave the issue a mysterious twist and fuelled speculation with regard to any secret commitment that the Nawaz Sharif government may have made with the Saudis.

Pakistan also has to be careful not to rock its uneasy relations with Iran, a neighbour that is already angry with Islamabad for not doing enough to check the activities of Iranian Sunni Baloch militants…

Nawaz Sharif has had a special relationship with the House of Saud that has given its name to the oil-rich country and has ruled Saudi Arabia as long as one can remember. This family relationship has endured under different Saudi kings. The relationship is now facing its biggest test as the prime minister’s failure to come up to the expectations of his Saudi benefactors could prompt the royal family to think anew about its ties with Nawaz Sharif and the Pakistani state.

Already, the warmth in the Pakistan-Saudi relationship seems to be receding and the criticism that the Saudi rulers are being subjected to in the ongoing Pakistani debate about the Yemen crisis could damage their ties. The huge Saudi defence budget and arms purchases have been animatedly discussed and also the fact that Saudi Arabia is seeking help from a poor country like Pakistan whose expenses on defence could be termed ‘peanuts’ compared to the Saudi spending.

The Saudis also won’t like to be told by Pakistani politicians that there is no real threat to Saudi Arabia’s territorial integrity due to the volatile situation in neighbouring Yemen. However, this is what is happening right now in Pakistan as the debate, particularly in the parliament and the media, sometimes becomes emotional and wayward.

The long years spent in exile by Nawaz Sharif in Saudi Arabia during President General Pervez Musharraf’s military rule strengthened the bonds between the two families. The Saudi hospitality and the support it offered to Nawaz Sharif when he was in trouble in Pakistan obliged him to no end. Now that he is prime minister of Pakistan for an unprecedented third time, he would like to repay the favour, but it is obvious his ability to do so is restricted by the demands of statecraft and the interests of his country. Family ties have to be relegated to where they belong when national interest is at stake.

The prime minister did the right thing by taking the issue to the parliament in the hope of reaching a consensus. With the ruling PML-N is isolated on the issue in the parliament and unable to get wider support to let Pakistan join the Saudi-sponsored military coalition, it may have to settle for a feel-good resolution declaring support for Saudi Arabia in case its territorial integrity is threatened and favouring a mediatory role in cooperation with other Islamic countries to help end the fighting in Yemen.

It is another matter whether Pakistan is neutral and credible enough to become acceptable as a mediator to all sides of the Yemen conflict.

The prime minister in his parliament speech said Pakistan was waiting for Turkey to make a move for a joint Pakistani-Turkish mediation effort once President Recep Tayyip Erdogan completed his visit to Iran. Nawaz Sharif also visited Turkey to discuss the possibility of a joint initiative for resolving the Yemen issue and hosted the Iranian foreign minister Jawad Zarif. However, both Pakistan and Turkey are seen as close to Saudi Arabia with Erdogan publicly backing the Saudi-led airstrikes in Yemen and questioning Iran’s attempts to gain influence in the Arab world.

Besides, mediation won’t be easy. The Saudi and Iranian positions presently are poles apart and rigid. The Yemeni groups had failed to resolve their differences earlier and the foreign intervention in Yemen has added to the complexity of the situation. The Saudis want restoration of the toppled government of President Abd Rabbu Mansour Hadi, who fled to Riyadh, while the Iranians are seeking an immediate ceasefire and an end to airstrikes by the Saudi government and its allies followed by intra-Yemeni dialogue and formation of consensus government.

The Saudis took it for granted that Pakistan, under Nawaz Sharif, would support it by all means and provide whatever help it requested. It asked for jet-fighters, naval ships, and ground forces, which meant that Saudi Arabia wanted Pakistan’s air force, navy and army to become part of the Saudi-led military coalition that is presently carrying out airstrikes in Yemen against the Houthi militia and former President Ali Abdullah Saleh’s loyalist fighters and could later send troops for a ground offensive and naval blockade of this poorest Arab country.

This is the reason that Pakistan’s name was mentioned and its flag was placed along with the other allies who had signed up as members of the Saudi-led coalition.

There is little appetite in Pakistan for deploying Pakistani troops in a foreign land and becoming involved in a conflict that is becoming protracted and could spillover to Saudi Arabia. The war against terrorism at home has sapped the energies of the people and the armed forces and there is concern that any decision by Pakistan to become involved in the multi-layered Yemen conflict could contribute to the sectarian divide in the country.

Pakistan also has to be careful not to rock its uneasy relations with Iran, a neighbour that is already angry with Islamabad for not doing enough to check the activities of Iranian Sunni Baloch militants who in their latest attack on April 7 killed eight Iranian border guards near the Pakistani border.