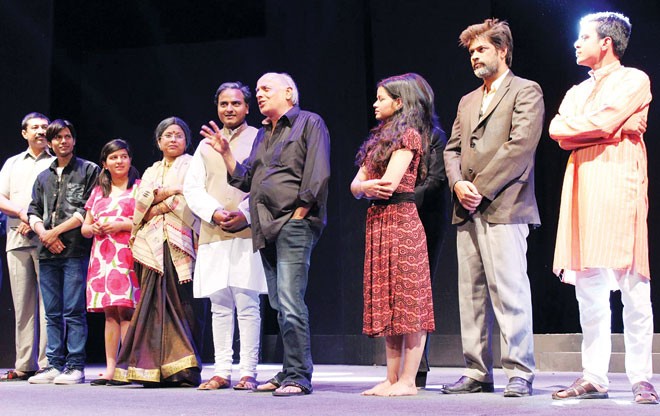 A drunkard gives up drinking for his daughter - that was the basic premise of Mahesh Bhatt’s 1989 film Daddy. Inspired by his personal struggle to quit alcohol and his own relationship with his daughter, director-producer-actor Pooja Bhatt, the film was adapted for stage by Danish Iqbal and troupe. The adaptation was a literal translation of the film from screen to stage, with the necessary omissions here and there, and Mahesh Bhatt praised the director for the play’s faithfulness to its original source. While the story may have been told word for word, so to speak, one had gripes with the lighting design that at times veered towards the kind expected in a variety show. In the two subsequent shows, one would expect that issues of timing are sorted out. On the whole, the audience on opening day appeared to be happy to go home with a Mahesh Bhatt memory, although it was a telling mark that the play did not receive a standing ovation.

During a brief address to the audience on the opening night, Pooja Bhatt said that she was proud of her father for many reasons, one of which is the fact that no one else in the (Bollywood) industry dared to stand here (in Pakistan) and express the need for both countries to join hands and work together. This final remark naturally segued into the next day’s meet of the duo with the press, in which the first question Mahesh Bhatt was asked was this:  Has he seen the gap between Pakistan and India narrow throughout the years in which he’s made multiple trips here?

"It’s only a matter of reaching out a little," said Mahesh Bhatt. "When I was here last at the Kara Film Festival, I could never have imagined that our films will be screened here, that your dramas would be so successfully aired on Zindagi TV, that we will one day have a cross-border exchange of talent."

"My wife is an Anglo-Indian," he continued, "She doesn’t speak a word of either Urdu or Hindi, but is the biggest Fawad Khan fan. The Filmfare Awards just recognized Fawad for having the best debut last year, which shows that the people of India have embraced him."

Citing these commonly known examples, Mahesh Bhatt painted a picture of neighbours growing closer in friendship and mutual understanding, but the press was still not satisfied. They posed him further questions about the unequal exchange between Pakistan and India. While Pakistani stars flock to India and contribute their talents to Bollywood, the move is not reciprocated. In fact, some of our most revered stars have been the target of discrimination in India.

Admitting that there is an occasional untoward incident, he said that the allegation that the welcome reception of Indian stars in Pakistan is not reciprocated across the border is exaggerated.

"Fawad Khan is a star in India," he reiterated, "Atif Aslam roams the street and is received like any Indian superstar such as Arjit Singh. Rahat Fateh Ali Khan is a household name. The government has never taken any action against any ill treatment, but I have personally spoken out against discrimination against Pakistani stars. Any discourse that creates differences should be discouraged. I have found myself in the minority but belong to a small group of committed people who strongly oppose such things."

Moreover, although he announced the intention to shoot in Pakistan back at the 2003 Kara Film Festival, he was unable to do so due to the law and order situation in Karachi.

"It’s really unfortunate that we haven’t shot in Pakistan. We can go to Sri Lanka, Bangkok, and London, but not Karachi, Lahore or Murree to shoot a film. Even though we look the same, speak the same, and our culture is the same. And there would be obvious economic benefits as well. When the colours of both nations mix, the result would be even more excellent."

This led to a query about the much-hyped Indo-Pak stage collaboration Milne Do between Danish Iqbal and Malik Aslam of Lahore’s Azad Theatre. Mahesh Bhatt, unfortunately, didn’t have an update on the status of the play, which was initially announced as a March production. Saying that since theatre is not his forte, he does not closely monitor the play’s progress, but added, "I principally support any cultural activity between Pakistan and India. It is not just films; last year at Aalishaan Pakistan when fashion designers from Pakistan visited India, I supported that as well." He expressed hopes that Pooja will carry forward his efforts with her work.

While he repeatedly stated that theatre is not his forte, he did have a more vocal opinion about the reviving Pakistani cinema.

"In this digital age, the young generation has come up and shown a superior cinematic understanding. Earlier, only a privileged class could claim to have it. Now, it’s a level playing field. Shoaib Mansoor’s Khuda Ke Liye and Bol caused a frenzy in India. Waar and Jalaibee did not release in India, but the exhibition of films has revived in Pakistan from being on its last legs. Atif Aslam, Rahat Fateh Ali Khan and Sharmeen Obaid-Chinoy are proof of the great talent in Pakistan, where the market has gone from non-existent to a growing one."