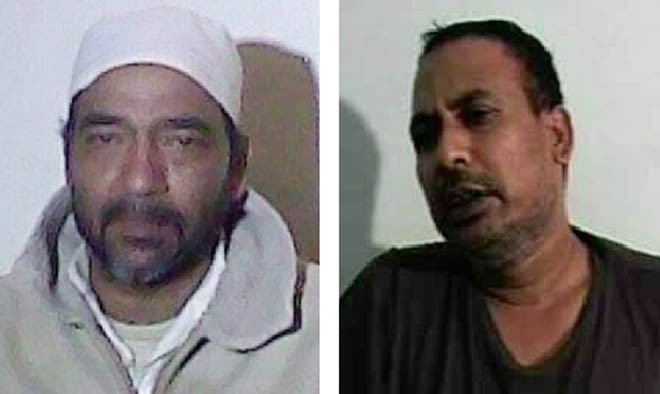 Saulat Mirza and Ajmal Pahari, both known workers of MQM, remained the icons of terror and fear for the people of Karachi. Known as ‘men-killing machines’, they have been disowned by the parent party.

Sources in police claim that Saulat Mirza and Ajmal Pahari were active members of the militant wing of MQM and were involved in all types of crimes including murder, attempts to murder, extortion, land grabbing and other criminal activities.

It is very difficult to say how the two young boys belonging to lower middle class families became such hardened criminals.

According to Imtiaz Hussain an intellectual and researcher belong to Karachi "like any young people in any part of the country, Saulat Mirza and Ajmal Pahari had some dreams and plans for future; their families too had expectations that their sons will be successful and respectable members of society. Now it is very difficult to judge how the two young men belonging to peaceful families were dragged towards the world of crime. But it is clear that the style of politics which was introduced in mid-1980s, hauled majority of young people to the field of crime and ruined their futures."

Saulat Mirza started his political career with MQM and he was sentenced to death in the murder case of Shahid Hamid, his gunman and driver.

Ajmal Pahari’s name came in the spotlight in late 1990s. He was arrested first in 1997 in a in a case related to the killing of four American Union Texas employees along with their Pakistani driver. Back then, the reward for Pahari was Rs1 million and he was nabbed by the Central Investigation Agency (CIA).

However, within five years, Pahari was acquitted in all cases and was released in 2005. Since then, according to an official in the anti-Extremism Cell, he has committed 58 more cold-blooded murders. "To add insult to injury, Pahari has also made millions of rupees through his network of target killers and extortionists," the official added.

The elusive criminal was on the run but was eventually nabbed by the authorities in a joint operation conducted by Karachi Police on a tip off by the security agencies.

The second time the Sindh police’s Crime Investigation Department (CID) arrested Pahari from New Karachi on March 28, 2011. His name became synonymous with fear not only for his numerous deadly feats, but also recently for extortion and land grabbing in the city. Police officials had kept a tab on his activities for a long time but they admit that he had been set free numerous times because he was strongly backed by one political party.

According to his confessional statement Ajmal Pahari had killed more than 100 people on the orders of the party. He is now in Karachi Central Jail, waiting for his final punishment.

Saulat Ali alias Saulat Mirza was sentenced to death by an anti-terrorism court in Karachi on May 24, 1999. He was found guilty of murdering the then managing director of the Karachi Electric Supply Company (KESC), Malik Shahid Hamid, his driver, Ashraf Brohi, and guard Khan Akbar on July 5, 1997 in the Defence Housing Authority (DHA) area of Karachi.