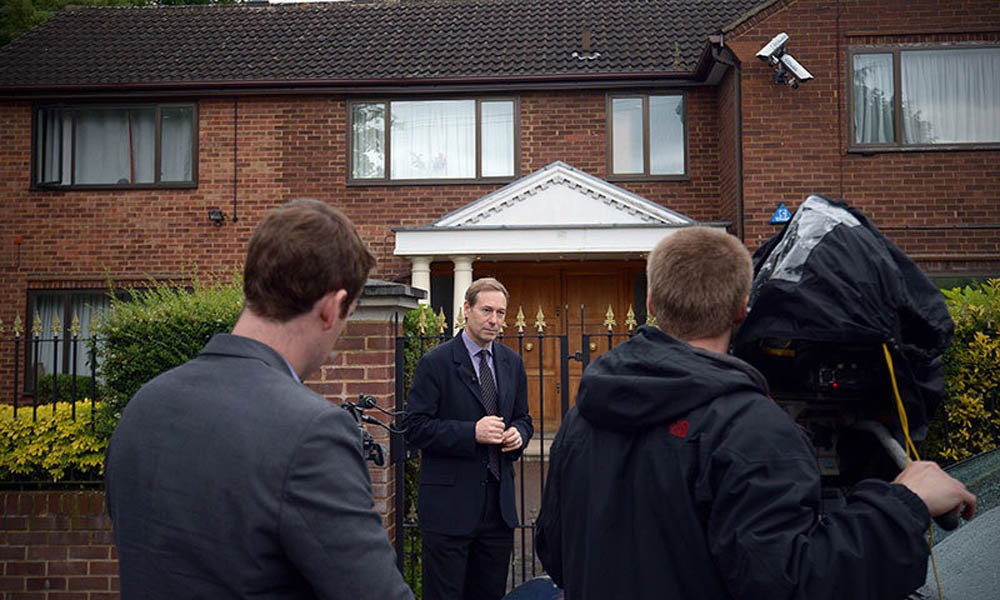 When Altaf Hussain reached London in the early 1990s, he was empty-handed and in a poor state. He had faced threats in Pakistan and escaped life attempts by militants.

The shrewd founder and leader of MQM was probably right in his assessment that he should leave Pakistan or face constant attempts on his life. In recent years, when asked why does he not go back to Pakistan, Hussain retorts, "are you not aware what fate Benazir Bhutto met?"

In Britain, Altaf Hussain started his political work, operating from a room in the office of an accountancy firm owned by Muhammad Anwar, MQM’s Rabita Committee member based in London. Thousands of his workers fled from Karachi as the military operation went on and lots of them joined him in London. Within a few months Altaf Hussain had set himself up in Elizabeth House in Edgware -- which is now owned by him and from where his party continues to control Karachi.

There is a common perception in Pakistan that Britain gave asylum to Alatf Hussain. According to Dr Malik Akbar of Malik Law Chambers, Hussain was granted Indefinite Leave to Remain (ILR) after it was decided that the backlog of all undecided asylum cases in the UK -- tens of thousands -- will be cleared. "It was a kind of amnesty which thousands of people got when the Home Office decided to clear the backlog. That means that the UK didn’t accept Altaf Hussain’s claim that he faced persecution in Pakistan and also the UK thought it best to not get too involved in his claim. Those who think that Altaf will be deported to Pakistan live in a fool’s paradise."

Around that time more than half a million people were applying for asylum to the UK each year. The backlog then grew to over a million applications and the home office looked unable to do anything about such huge numbers. It was decided that the applicants will be granted leave to remain en masse to clear the backlog.

Altaf’s MQM saw a remarkable turnaround in its fortunes when Pervez Muhsarraf took over Pakistan and MQM became his ally. But the killing of Dr Imran Farooq in September 2010 changed a lot of things.

The Scotland Yard are convinced that Mohsin Ali Syed and Muhammad Kashif Khan Kamran -- two suspects sought by the London police -- were accommodated and facilitated in Karachi and London by senior figures linked with the MQM.

British diplomats have not only accommodated Altaf Hussain but have gone out of their way to protect him when the Pakistani authorities contacted them to reign in Hussain. Most of these contacts -- complaints and grievances -- have been of a discreet nature but the documents obtained under the Freedom of Information (FoI) Act by this correspondent show that British diplomats met leaders of MQM almost every month to discuss politics in Pakistan and Karachi.

The vast nature of MQM’s contacts with diplomats in Foreign and Commonwealth Office (FCO) can be explained in the context that over two dozen British companies operate from Karachi and have been doing business, without any disruption caused to their operations.

No one has yet been charged for Dr Imran Farooq’s murder but investigators believe that those who killed the dissident leader had links with people in the MQM. The Scotland Yard has interviewed hundreds of people so far in relation to the murder investigation.

Altaf Hussain was questioned about Dr Imran Farooq for the first time after his arrest in June last year. He used his right to remain silent and refused to answer any questions.

The Scotland Yard are convinced that Mohsin Ali Syed and Muhammad Kashif Khan Kamran -- two suspects sought by the London police -- were accommodated and facilitated in Karachi and London by senior figures linked with the MQM.

There have been a lot of speculations in Pakistan about Pakistani officials holding meetings in London with UK officials about the fate of Altaf Hussain but there is no truth in these reports.

More on: The context

A source in the British foreign office told TNS that Pakistan has always passed information about MQM to the UK authorities even when the party was an ally of Musharraf and worked in partnership with the PPP government. The UK had told Altaf Hussain to be careful about what he says in his speeches but it never attempted to bar him from issuing controversial statements.

Things have now changed significantly. The MQM remains a united party but it’s not as organised and strong as it used to be. Its hold on the city has weakened and the leadership has shown weakness in words and actions, leading to demoralisation within party ranks. The UK has been following the issue from close quarters.

FCO officials agree that Pakistan has brought MQM under considerable pressure at the public level after the raid at their headquarters at Nine Zero.

British officials have told Pakistan that they can only act against Altaf Hussain if there is evidence against him and the competent authority is Scotland Yard and only investigators and Crown Prosecution Service (CPS) can decide whether or not there are sufficient grounds to charge and prosecute Hussain and his associates.

That’s the standard British legal system. The UK authorities will not do anything to please Pakistan. Yes, to appease Pakistan to some extent, the UK may ask MQM to tone down, which the MQM leadership has already done after initially slamming the Rangers operation.

It’s the outcome of money laundering investigations that may create further problems for Altaf Hussain. That is a long process and may take two years from now. As it stands today, no one has been charged as yet.

A spokesman of the MQM tells TNS that the party is the victim of a media campaign aimed at harming the party. The spokesman says hundreds of workers have been picked up and being kept in illegal detention. He points out that MQM is being victimised and pushed to the wall through television channels. He is sure that MQM will mount a robust defence. He complains that the whole trial is taking place in the media and nothing has been presented before the courts.