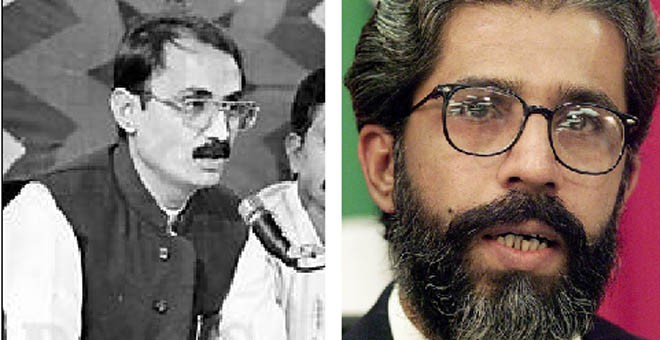 Many of the founder leaders of MQM have been murdered mysteriously and fingers have been pointed at the party’s own ranks.

Azeem Ahmed Tariq and Dr. Imran Farooq were the backbone of the party. In 1977, they formed All Pakistan Muhajir Students Organisation’ (APMSO) along with Altaf Hussain and other associates: Badar Iqbal, Aamir Khan, Afaq Ahmed, S M Tariq and others.

Azeem Ahmed Tariq was murdered in Karachi at his home on May 1, 1993 when some unidentified gunmen entered his house late night and fired at him.

Some media reports pointed fingers at the former city nazim, Mustafa Kamal, for helping the murderers. Mustafa Kamal is said to be a close relative of Tariq and at that time he was with him as his bodyguard.

It is worth noting that MQM target killer, Saulat Mirza, confessed a few days ago that Altaf Hussain had ordered the assassination of Azeem Tariq. According to some media reports, an alleged target killer, Nadeem alias Nadoo, arrested by rangers in a raid on Nine Zero on March 11, also confessed to have murdered Azeem Ahmed Tariq.

Insiders of the MQM are of the view that serious differences had emerged between the self-exiled leader Altaf Hussain and Azeem Ahmed Tariq after the army’s operation against MQM in June 1992.

MQM leaders loyal to Altaf Hussain were of the view that Azeem Ahmed Tariq was supposed to join the MQM (Haqiqi), a dissident faction of MQM led by Afaq Ahmed and Aamir Khan.

MQM remained in power at the provincial and federal level for thirteen years after the murder of Azeem Ahmed Tariq but the party never made serious efforts to solve the murder case of party’s founder chairman.

MQM’s founder secretary general, Dr Imran Farooq, remained underground from 1992 to 1998. In the mid 1998, he succeeded in fleeing from the country and reached London where he was granted political asylum by the British authorities.

Like Azeem Ahmed Tariq, Dr Imran Farooq had also developed some differences with Altaf Hussain. In September 2010, he was on his way back from work when he was attacked outside his home in Edgware, London.

Two suspects identified as murderers of Dr Farooq -- Mohsin Ali Syed and Mohammed Kashif Khan Kamran -- whom the Scotland Yard believes were on student visa. They succeeded in fleeing from Britain and stayed in Sri Lanka and were later arrested by Pakistani intelligence agencies on their return to Karachi.

The alleged murderers of Dr Imran Farooq are believed to be active workers of APMSO student wing. They were allegedly tasked by the party leadership to carry out this high profile murder.

Haider Abbas Rizvi refutes the allegations and says the party is pursuing Dr Farooq’s case in London and wishes the arrest of real murders of Farooq.