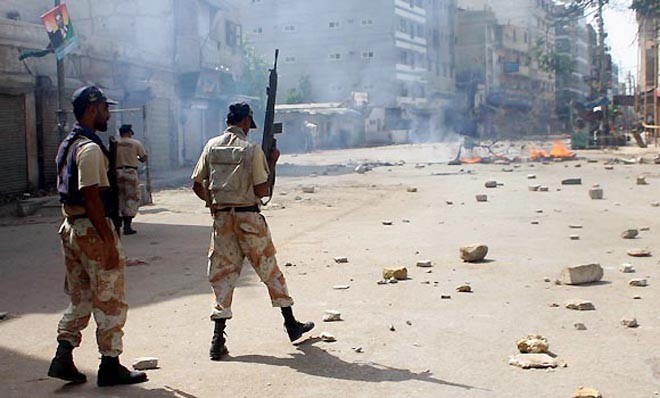 Muttahida Qaumi Movement (MQM) is going through testing times after the raid on its head office, arrest of its office bearers and workers along with some of accused and convicted criminals from areas adjacent to its head office.

Up until now, there are no signs of de-escalation of the pressure put on them through these arrests linked to some of the most high profile crimes -- like the murders of Parveen Rehman and Zehra Shahid Hussain, Baldia factory fire incident and sectarian killings.

The inquisition process being held on the print, electronic and social media has given rise to rumours, speculations and wish-lists. The federal ministers to leaders of political parties to known adversaries and political rivals of MQM have speculated on the prospects of change in the party leadership. They have questioned its status as the sole representative of a significant section of the city’s population, its ability to control Karachi and using this control as part of negotiations and power sharing at the provincial and federal level.

MQM has lashed out at all such speculations of leadership change, declaring them far-fetched. But current developments have made it very hard for them to defend their position and Farooq Sattar has had to comment that they never claimed that MQM is a party of the unassailables.

The party chief Altaf Hussain has in his frequent media appearances after the Nine Zero raid hinted at internal considerations. The party has responded to criticism of a highly centralised administrative structure by reviving the institution of Central Executive committee (CEC), which has the power to revisit the party constitution, elect its central organiser and central office bearers through balloting, and take strict measures against violent and criminal elements.

It is a known fact, and has been established through LEAs reports and statements during the Supreme Court hearings, that political parties in Karachi have armed wings to support their activities on ground, engage in turf wars with political rivals and collect extortion money through organised network, paving the way for criminal elements and jihadis to employ similar tactics.

At the very beginning of the operation, in September 2013, then DG Rangers and now ISI chief General Rizwan Akhtar had reiterated that political parties have armed wings to resort to violence. He had further said that it would take them six months to make a difference. All the statistics regarding LEAs operation in Karachi too are proving that fact and showing a greater focus over political parties in terms of raids, targeted operations and numbers of people arrested.

Many quarters were skeptical of the outcome of the LEAs operation as it hardly helped in de-escalating violence and target killings on political and sectarian grounds, though it did manage to curtail the sudden outburst of violence, arson as response to political killings and forced shut-downs of businesses.

The current round of LEAs’ operation in Karachi should now be seen as part of the National Action Plan (NAP) -- a roadmap to curb militancy and terrorism across Pakistan. The plan makes two references to Karachi -- one about leading the operation to its logical end and second was about the armed wings and Lashkars (militias).

A few days after the revelations of the JIT report, Prime Minister Nawaz Sharif and the army chief had attended a meeting at the Governor House Karachi along with the political leadership and security officials. They were evaluating the implementation of NAP and LEAs operations in Karachi against armed groups, criminal elements backed by political parties and various rogue jihadi factions of TTP.

Also read: "There should be across the board action against criminals"

After devising NAP in December, LEAs’ steps as part of ongoing operations were presented and repackaged as part of the implementation of NAP. In a meeting at the provincial level, the overall security plan and police performance was reviewed in connection with the progress on the Plan. Police officials presented detailed statistics of the police operations. Provincial Police chief Ghulam Haider Jamali was briefed that under the NAP, the Karachi police had conducted 7,136 raids in different parts of the city. Resultantly, 378 police encounters took place and over 50 terrorists were killed and 22 others arrested. Police had also seized over 77kg of explosives, 118 bombs and grenades and four suicide jackets between December 23 last year and March 21.

Soon after, a JIT of Baldia factory fire incident emerged, declaring the fire incident as a deliberate act by the MQM workers. Some quarters have started calling it an act of terrorism and call for a trial of the accused in military courts. Even Khursheed Shah, PPP veteran and leader of the opposition, has asked for the same.

In the changing scenario, the death penalty has been restored as an option against elements of political parties. The pandora’s box of confessional statements by detained MQM workers has increased pressure on the party. Soon it will be the turn of other political parties.

Another attempt of political engineering is underway. Now it is up to the political parties to adjust to the changing landscape.