At the Art Dubai 2015, Pakistani artists in significant numbers sought to introduce different facades of social, political and religious realities 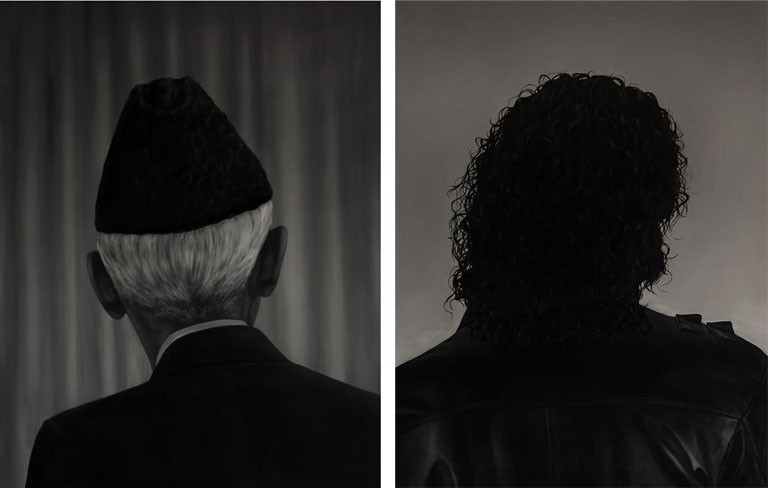 The ninth edition of Art Dubai held from March 17-21, 2015 was both different than and similar to other such events held there in the past. Although the recent Art Fair, like last year, was split into sections of Modern and Contemporary (a divide that needs to be defined objectively and rationally), the presence of Pakistani artists was strongly felt this time.

To start with, a Pakistani gallery (Canvas Gallery from Karachi) for the first time participated in Art Dubai’s Contemporary section. Another gallery, Art Chowk like last year had a booth in the Modern section, showcasing works of Shahid Sajjad. Besides these, a number of galleries from South Asia, Middle East, Far East, Europe and USA participated with several Pakistani artists displaying in their spaces.

Canvas Gallery represented a single artist -- Ayaz Jokhio. The act of displaying one artist in an international art fair, visited by viewers of multiple tastes and preferences, could be risky. But it reflects a sign of maturity where the art fair is viewed not as a market selling various goods but an exhibition space in which a single individual is in focus.

Ayaz Jokhio has painted the rear heads of known personalities in varying shades of greys. The real puzzle, engagement and excitement was to identify the face turned towards the wall. All of these figures being famous, it was not impossible to decipher their identities.

Often in our ordinary lives, we come across these larger than life figures --film stars, singers, sports personalities, politicians, popular painters, bestselling writers, religious leaders and public intellectuals -- whom we claim to know but certain aspects of their lives remain concealed from public view. In the media and the shared discourse, only one side of their personalities is highlighted that suits the consumerist society or a political or religious agenda. Hence, they become sacred entities, with one-dimensional personalities entirely devoted to their cause, creations or cults.

Ayaz Jokhio has questioned this process of eliminating the ‘Other’ in one’s personality and, using a basic device, rendered the hidden side of some of the most recognisable faces.

This phenomenon is best represented in the way their images are portrayed and projected. Often a standard portrait is circulated which replaces the real self of the person. The image dominates and blurs the actual person. Ayaz Jokhio has questioned this process of eliminating the ‘Other’ in one’s personality and, using a basic device, rendered the hidden side of some of the most recognisable faces.

Whether it is Chairman Mao, Marylin Monroe, Gandhi, Jinnah, Warhol, Einstein, Kafka or Michael Jackson, each is identified through the back of their heads. Jokhio’s idea of rendering these in black and white imbibes a detached, almost passport-like, quality to images which not only belong to single person but reflect the aspirations of a silent majority which is forced to see the other side of reality through art.

The other Pakistani artists at Art Dubai also sought to introduce different facades of social, political and religious realities through their works. At the Aicon Gallery, Anila Quayyom Agha constructed a large cube with filigree of Islamic geometric patterns laser cut in steel and casting light in its surroundings. The relationship of religion with light, its connection to patterns, and its elementary shape reminding of one of the holiest structures in the Muslim world, indicate a new interpretation of the Muslim past for the sake of a present that includes both Eastern and Western ways of thinking.

At the same booth, Abdullah M. I. Syed created works with almost similar sensibilities. Aura 1 comprises crochets prayer caps daubed in black and emanating light from within, signifying how a faith has been misrepresented and misread both inside and outside. In addition, Syed deconstructs the imagery of miniature painting through cutting shapes in the UAE currency. The two series Courting Falcon and Assembly offer a critique on the popularity of miniature painting in art market, in addition to seeing Art Dubai and any other art fair converting art into commodity instead of being something for purely pictorial pleasure.

Interestingly, miniatures were shown at another gallery, Jhaveri Contemporary from Mumbai, but those were not painted by Indian or Pakistani artists. Instead, Alexander Gorlizki from Britain in collaboration with traditional painters from India had created works based upon the imagery of miniature paintings, which shared the same scale and decorative/geometric motifs. His involvement in a conventional art practice from another time and region certifies how the world is not confined to historical territories or national boundaries.

This idea was enhanced by looking at works of other artists from Pakistan who had a fair share at the Art Fair. For example, Ali Kazim also at Jhaveri Contemporary displayed his paintings and works on paper. Both in oil on canvas and graphite on paper, Kazim confirms a unique approach towards the notion of simple representation which, due to the selection of subject and the scheme of rendering, turns into a symbol of experiences shared by a large part of humanity. Immaculate painting of a man lying on the floor, head submerged in clouds and disintegrated clay utensils suggest a basic narrative of survival against forces of nature (both outside and inner).

Like Kazim, Noor Ali Chagani chose to rely on something mundane and familiar. His tiny bricks, shown at the space of Leila Heller Gallery, New York, were joined to construct a tapestry with a few twists and turns. In one of the works, small bricks were painted with letters and texts as if emulating the graffiti in our urban scenarios. The link with brick and the weave of textile was more evident in another work in which bricks were composed in the scheme of a jute mat.

Other artists from Pakistan, such as Rasheed Aareen, Hamra Abbas, Adeela Suleman, Bani Abidi, Lala Rukh, Masooma Syed, Fahad Burki, Faiza Butt, Mariam Suhail and Mehreen Murtaza, also displayed their works at various galleries. But one aspect that became obvious at Dubai was their connection to a national boundary or identity. This in some cases serves as a chain like mixing with each other and posing each other’s pictures on the social media.

Hopefully, a gain of Art Dubai will be that in future the artists would move away from limitation of nationhood because the whole concept of geography may change in the coming years. Instead of political countries, it could be more like artists’ personal territories or domains or republics which become a dominant feature in international art fairs.