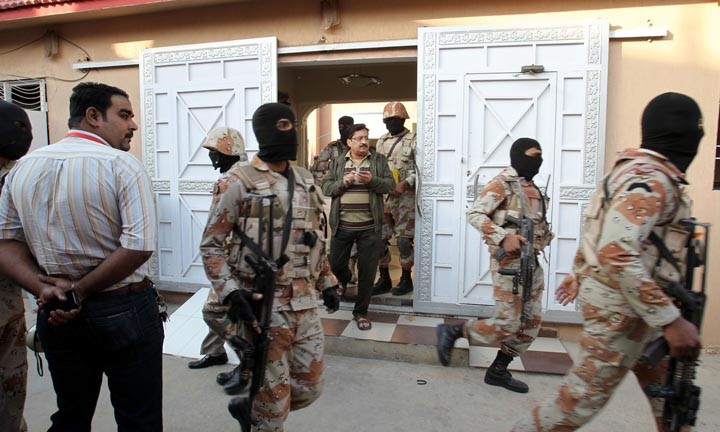 The Rangers’ raid on Muttahida Qaumi Movement’s central secretariat Nine Zero and the arrests and killing of an MQM worker have unfolded a tug of war between the two with allegations, counter-allegations, contradictory statements and clarifications being issued from both the parties to this whole new political episode.

The accounts of criminals nabbed from MQM’s head office and a video statement by the convicted MQM worker Saulat Mirza have put the MQM in a difficult situation. The frustration can be seen in the leaders’ tv appearances, statements, press conferences and television interactions of the party chief Altaf Hussain. An FIR has been lodged by the Rangers against Altaf Hussain for using threatening language on a tv channel while the interior minister has asked the British Government to stop Hussain from making threatening calls.

What has come as startling revelations to people glued to their television screens had nothing unusual for those who did not rely on the electronic media for updates on Karachi and have gone through some of the widely-read Urdu dailies and weeklies in Karachi. Known for their political tendencies, these publications had been publishing sensational (fictionalised in many cases) stories on the city’s political violence, accounts of notorious criminals and revelations by those nabbed by the law enforcement agencies (LEAs), backed by confessional statements of some of the criminals associated with political parties before the joint investigation teams. The videos of these confessional statements were disseminated through the internet as news channels were not at all interested in such stuff for obvious reasons.

Most of the charges levelled against MQM have already been published and have contributed to its notorious image. The party has contributed in boosting that image. A few years back, when Zulfiqar Mirza used derogatory remarks against Altaf Hussain in a dinner at ANP’s Shahi Syed’s house, the MQM workers retaliated by torching half a dozen mini buses. Recently, Imran Khan’s insulting remarks about Altaf Hussain calling him "a crazy man" were responded to by Haider Abbas Rizvi when he said: "Perhaps Imran Khan has not seen what actual craziness is?"

The party is going through a huge internal crises; its ability to shut the whole city down on a single call and inflict violence on a big level has already been curtailed by various factors -- including the ongoing LEAs operations, conflicts with political rivals and turf wars with sectarian militants and jihadi organisations like Ahle Sunnat Wal Jamaat (ASWJ).

The LEAs who have embarked on a one and a half year-long operation in the city have concentrated their energies largely on addressing violent elements backed by political parties.

"Forty MQM workers have been killed in Chishti Nagar area of Orangi Town during these months," said the father of Danish Kaleem, the deceased worker of MQM, at his funeral. Two MQM lawmakers elected from Orangi Town and dozens of workers from the same town have been killed in the last few years, with banned sectarian militants having claimed the responsibility.

It took the political parties many years to concede to this distinct characteristic of the violence in Karachi. Moreover, the compulsions of these rivalries meant that when militant groups began to exert their influence in the city, the parties continued to blame one another rather than addressing the new threat.

"MQM’s brouhaha on Taliban was followed by resorting to violence against ANP, which contributed to weakening the ANP in the face of Tehreek-i-Taliban (TTP) threat in their localities, resulting in TTP extending its foothold," said Laurent Gayer, author of a magnificent book on the city Karachi: Ordered Disorder, in a session at T2F a few weeks back.

This attitude of relentlessly blaming political rivals was not confined to one side alone. The ANP, too, instead of recognising the threat from militancy, had resorted to similar allegations. When ANP’s President District West Saeed Ahmad Khan was killed at his Karachi residence, the party leader Bashir Jan insisted that he was killed by the MQM, further accusing it of using the Taliban as contract killers. Yet the assassin in this case, who was also killed in the attack, was identified as a TTP affiliate from Saeed Khan’s native village in Swat.

"After arriving in Karachi, the militants in fact have learned from the politics of the city and employed all the tactics of these political groups -- to make alliances with local criminals, collect extortion money and resort to other financial crimes to generate funds for various activities," Laurent Gayer had further said.

But if political parties have been guilty of solely focusing on accusing one another and avoiding militant groups, the same is true of the response by the state. The LEAs who have embarked on a one and a half year-long operation in the city have concentrated their energies largely on addressing violent elements backed by political parties as evident from statistics of raids, targeted operations and the numbers of arrests made public. Almost fifty per cent of the raids and operations by the Rangers were targeted at MQM units and sector offices. These were followed by MQM’s allegations -- of humiliation of its party workers, detention of office bearers and killing of many of them in staged encounters or dumping of their bodies at various places.

"A few years back, you could not have imagined that public transport will pass through the Saeedabad Rangar Para A-3 sector Baldia Town, an area of strong MQM support. But on the day of raid on Nine Zero, mini buses and Qinqi were not stopped at any point during the whole day," said a resident.

But the operation has not been successful on other counts, especially regarding the violence by jihadis and sectarian elements.

"A large number of TTP militants from its various factions -- particularly the Swat, Mohmand and Mehsud factions -- were killed in raids and encounters during the operations by Rangers and CID Police. However, their retaliatory violence against the police is a clear indicator of their strength, as they have murdered hundreds of policemen in the city, including several high-ranking officials, in the past year alone. At this time, the average rate of policemen killed in Karachi has increased to one per day," said a police official from Mominabad Police Station Orangi Town.

"The Rangers are not integrated with the city population and are living in their own residential blocks assigned to them while the policemen have to live in the suburban localities and interact with people. Hence, they are an easy target for the militants," he says.

The ability of security officials to take action against jihadis and sectarian elements has faced various tactical, political and judicial hurdles. The traditional ways of curtailing militant actions, such as raids and encounters, have not yet damaged their network or impacted their financial resources.

Rangers too are a party to the whole conflict and share dividends from this whole enterprise. Hence, these developments have consolidated their negotiating powers in controlling distribution of water in a city that faces a chronic water shortage.

At the end of the day, the resolve on the part of LEAs to pressurise political elements to isolate themselves from violence is indeed the way to go. But demonising political parties and politicising this whole action may push the militants among their ranks to join hands with sectarian and jihadi elements, causing more deaths and mayhem.