Fall in love with chocolate, again 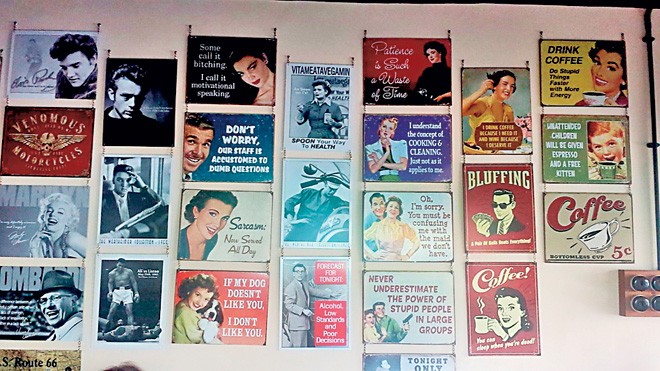 If you live in Islamabad and haven’t tasted Burning Brownie’s double chocolate cupcakes, chances are you’re living under a rock. Located in a corner of Beverly Center in Blue Area, Burning Brownie is a confection factory that makes the most delicious chocolate desserts. This small haven produces international quality cakes and cupcakes that could give even the Hummingbird Bakery a run for its money!

This cozy little chocolate shop serves the dual purpose of a bakery and a cafe. It may not be able to accommodate more than 15 people at a time but that’s exactly what makes the place so interesting. An amalgamation of chic, classic and funky, Burning Brownie reminds one of Hotspot because of its front wall that is adorned with Hotspot-esque metal wall hangings. However, the rest of the ambience is quite different, which ensures that the place has its own identity too.

Ammar Mumtaz is the guy who deserves credit for bringing pure chocolate bliss to Islamabad. In an informal chat with Ammar, Instep found out the secret behind Burning Brownie’s delicious chocolate cakes and cupcakes. It uses luxury chocolate like Callebaut and Valrhona, which is used by Michelin starred restaurants internationally. Ammar who is actually a business graduate admitted he had not received any professional training.

"A friend and I baked a cake out of a Betty Crocker mix one day, which made me curious to find out its ingredients and bake one from scratch," he shared. "I tried that and a relative of mine told me to sell them. I took her lightly until one day she called and asked me to bake a cake for her friend. Then onwards she started ordering a cake everyday on behalf of her friends and that made me believe I could actually sell my cakes. I later found out she was ordering the cakes herself to make me believe in my capability."

"I started a page on Facebook but even that didn’t get me many orders," he continued, "so I decided to supply to places. I spoke to the Shell Select in F-7 and asked them for a small space to display my cupcakes and the management gave me an entire counter after trying the delicacies. From then onwards, there has been no looking back. After a year or so, I thought it was time to open up my own space and here I am today, selling around 300 cupcakes and up to 500 pastries everyday!"

I sampled the Peanut Butter Chocolate Pastry while speaking to Ammar and I have to admit I’ve never tasted such a perfect blend of peanut butter and chocolate in Pakistan to this day. Peanut butter is an acquired taste so those who enjoy it will love the way it has been blended with a chocolate base and light mousse. For those who do not like peanut butter, the same pastry comes in a chocolate fudge version too, which tastes just as good if not better.

The cakes can be ordered whole or by the slice and are undeniably the best chocolate cakes in town. The most famous one is chocolate fudge aka the mud chocolate cake, which is a three-layered and extremely moist chocolate delight that has a Nutella like fudge layer on the top. The fudge cake is heavy but one bite of the cake makes you forget all the worries in the world. The Ferrero Rocher cake is just as delightful.

While I personally wouldn’t recommend the smoothies, the chocolate shake and coffees are definitely worth mentioning. Ammar revealed that he imports his chocolate beans from London and while that undeniably adds to the cost, he believes in delivering quality to his customers.

The cheesecake at the cafe is soft and fluffy, just as it should be with a hint of vanilla, built on top of a perfectly crisp shortbread cookie crust. You cannot possibly get a better version of New York cheesecake than this in Islamabad. It is made to perfection and is unequivocally delectable.

What disappoints at Burning Brownie though is the lack of savory items. The sandwiches leave a lot to be desired and the mini pizzas are nothing to write back home about either. It is also rather strange that the brownies at Burning Brownie are not quite its unique selling proposition.

Fall in love with chocolate, again