Poison in the plate 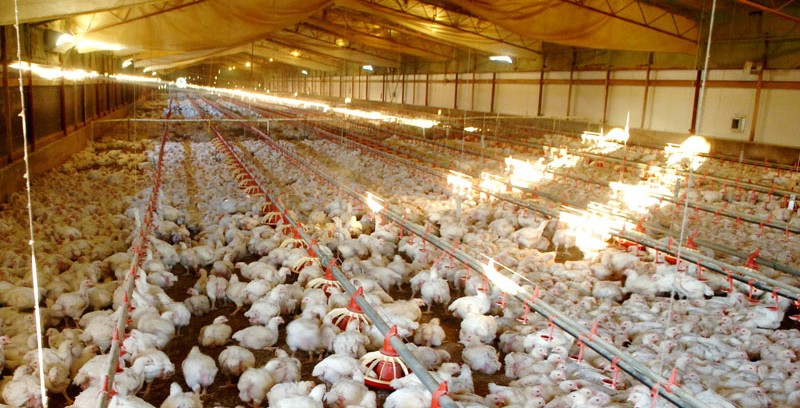 Chicken in your plate can cause cancer. This is in the headlines in America for a while since FDA (Food and Drug Association) has admitted that drugs containing arsenic approved for use in feeds for chickens and turkeys are not safe and can cause cancer.

After the report which confirmed that treated organic arsenic fed to the birds transforms into inorganic form in bodies. Livers and muscles of the birds contained arsenic above normal level, it has been found. The FDA has banned the feed that was being given to 70 per cent of the broilers produced in the USA because exposure of humans to that meat could harm them too.

Poultry sector has been growing at a pace of 10 per cent annually for the last many years. Annually 1.2 billion broiler birds are produced and average per capita per year consumption is 6.5 kg.

Pakistan is ranked as 11th largest producer of broiler chicken in the world. Seven million tonnes of poultry feed is produced and consumed locally. This feed helps a chicken gain 2.4 kg weight in maximum 40 days. It is said that the breed which attains this weight in such a short time is the result of research done over 150 years and scientists have pooled the fast growing genes after long experiments.

It is pertinent to mention here that only two or three breeding companies have monopoly here and are supplying around 90 per cent of the world’s breeder broilers.

"Due to the monopoly of companies we are bound to purchase one day chick at high cost," says Rana Abdul Sattar, Chairman Pakistan Broiler Farmers Association. Rana further says that poultry meat fed to the broilers is produced from waste and remains of dead birds and animals. "After the treatment, steroids and other growth promoters are added to the feed but the formula and ingredients are not printed on the bags," he adds. Rana demands that formula should be printed and the feed should be checked and approved as per formula by the Drug Regulatory Authority. Interesting statement -- a poultry grower is blaming the product but using the same to earn profit from his business.

"The now-banned arsenic based product 3-Nitro (Roxarsone) has never been imported to Pakistan. The reason is not that we boycotted it because we were aware of the side effects of the medicine, fortunately, it was never launched in Pakistan by the company," says Dr. Abdul Karim, poultry feed expert. Karim confidently says that arsenic or any other heavy metal doesn’t exist in poultry feed.

"We use minerals i.e. manganese, sodium, calcium, phosphorus, iron, copper, iodine and selenium and other non toxic materials in poultry feed." He says that growth promoters are used for efficiency of gut system of the chicken and these can be enzymes or acidifiers but can never be a toxic material. Karim says that the standard of the poultry feed and the broiler produced in Pakistan is same as it can be in any developed country. "We follow the practices and guidelines opted in America and Europe," he claims. Here seems a contradiction when we talk about the use of arsenic for growth promotion that was a continuous practice in the USA for decades.

"First of all we do not use the now-banned arsenic based product here in Pakistan and if it is used somewhere that would be negligible and harmless to the human health," Abdul Basit, former Chairman Pakistan Poultry Association claims.

Basit further says that the chicken meat produced anywhere in Pakistan is best and safe for healthy life. Former chairman Pakistan Poultry Association told TNS that per capita consumption of chicken in Pakistan is about 6.5 kg/person per year whereas it is 13 kg/person per year worldwide. "In UAE and Saudi Arabia it raises to around 60 kg/person. Their average age is 80 and we have around 50 years here in Pakistan. It means those who eat more chicken enjoy healthy, long life and it also proves the harmlessness of chicken meat to human health," Basit argues.

Dr. Abdul Rehman, Director Poultry Research Institute, Rawalpindi says that the product, now-banned in the USA, had very limited use in Pakistan and still, that was harmless to human health. "Many other growth promoters are available in market and are arsenic free and less toxic," Rehman adds. He says that coccidiosis is a common disease and can be prevented through proper vaccination and other measures. It can also be treated by using other coccidiostats available in market, less toxic and non-arsenic.

Other arsenic-based drugs that are approved for use in food-producing animals include nitrasone, arsanilic acid, and carbarsone. Here question arises that when the investor can get more profit by adding a substance to the feed that can not only prevent his flock from the 2nd most fatal disease but also can help it grow faster and gain more weight and above all that is being used all over the world as an approved drug, why he will go for other preventive measures leaving that aside? Current data indicates that only the 3-Nitro® and nitarsone products are being marketed.

It appears that there is no proper check and balance system for approval of feed and drug use in poultry, still we have DRAP (Drug Regulatory Authority Pakistan) which is responsible to regulate such things in the country. Sources in DRAP say that no arsenic based growth promoter is there in the list of approved import for poultry medicine.

TNS has observed that there is a dire need of proper legislation and regulation for one of the most important sectors of country’s economy. At present there is no implementation of any proper set of laws or act that can regulate the sensitive poultry industry. The sector is following international practices only which fortunately are standardised. A number of steps have been taken and waiting for implementation. It has been learnt that a livestock act, slaughterhouse act, poultry feed act, environmental act and above all proximity act for poultry industry are in process for several years but need to be finalised.

Poison in the plate