"Women directors have gone a lot further in Pakistan than in the States."

Instep talks to Nausheen Dadabhoy, who’s breaking new ground as the only female cinematographer working in Pakistani cinema and television 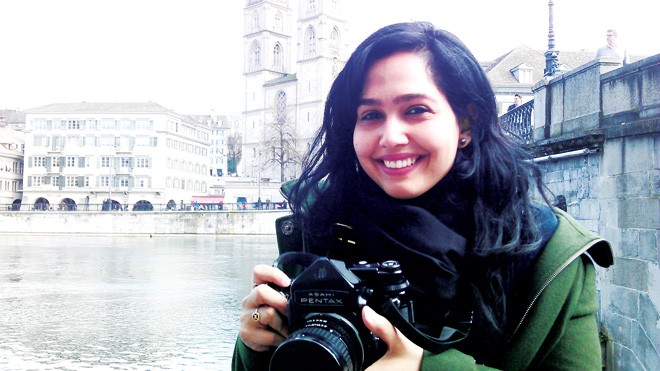 You may not have heard Nausheen Dadabhoy’s name, but you’ve definitely seen her work. Iram Parveen Bilal’s Josh, Mehreen Jabbar’s Jackson Heights and the trailer of Jami’s unfinished film noir Downward Dog have all had her behind the camera. This week, the LA- and Karachi-based cinematographer screened the first feature she has directed, a documentary on 2012 earthquake affectees titled The Ground Beneath Their Feet, in Karachi. Instep caught up with Nausheen to talk about the circumstances surrounding the rarity of female cinematographers in Pakistan and America.

Instep: First things first. When the practitioner of any craft who happens to be a woman is asked what it’s like to be a female writer, artist, and the like, they tend to resist the term, and understandably so. Would you rather not be identified as a ‘female cinematographer’?

Nausheen Dadabhoy: I understand the resistance. I grew up in the US; when I meet people, they always want to categorise you, especially goras, who say "Oh, you’re Pakistani! Oh, you’re Muslim!" But there are lots of other things about me that inform my work. It’s the same thing with being a woman. It’s not the only thing that influences how I approach shooting. Being an American, being a woman, being a Muslim, being a Pakistani, being a comic book nerd, every one of those things informs my work. So it is annoying when people box you in like that.

Having said that, I don’t agree with female cinematographers who say that being a woman doesn’t matter. If they got work and (their gender) was never an issue, good for them. But I don’t appreciate that they say "Don’t limit yourself because you’re a woman" when you’re constantly being limited by society because of it. So yeah, I don’t like (being identified as a female cinematographer) but I understand it.

Instep: You’re still the exception, not the norm…

Nausheen: In the US, there are so many women who are shooting. But there’s definitely a glass ceiling; for example, one of the most recognisable female cinematographers in the US is Ellen Kuras, who shot Eternal Sunshine of the Spotless Mind. I don’t know what she did after that, and it seems she can’t break into bigger budget films. More recently, Rachel Morrison, an up and coming DoP who shot Fruitvale Station, said in an interview that so many people are trying to fill the quotas for women directors on network TV, that she got offered to direct something without having any directing credits, but can’t get a shooting job on network television despite having a proven track record as a cinematographer. It’s insane.

In Pakistan, there is no market. There’s just a bunch of heavy hitters that are all male. I’m no one compared to them; they’ve been around for so long!

Instep: How were you drawn into cinematography in the first place? Did you go to film school or did you discover an affinity for it over the years?

Nausheen: I wanted to be a film director. Everybody does. But even before we are able to shoot anything, we’re asked to observe film sets. I ended up helping out in the lighting department of the first film I observed. I found it a lot more interesting (than direction). I did direct some films in school, but I hated it! The friend who shot my film was basically shadow directing for me. I didn’t really care about what the actors were doing; I wanted to know what we were doing with the camera!

Instep: A lot of female cinematographers have had to face doubt about whether they’d be able to handle ‘the physically challenging and technical nature’ of the job? That perception doesn’t seem to have deterred you…

Nausheen: My doubts had nothing to do with me being a woman. Part of why I didn’t want to be a director is that I hate being centre of attention. It was something that I had to overcome, because even as a cinematographer, you have to lead the lighting and camera department.

Apart from that, there were a lot of things I didn’t think about. A professor tried to warn me that it’s a boy’s club, but when you’re 21, you don’t care. It’s not like I wasn’t going to try.

Instep: Did you encounter sexism in the industry then?

Nausheen: It’s not easy to find work anyway. Firstly, you’re really young, and there’s a little bit of sexism too. For the first three years of my career, I worked with women. Some female directors want female cinematographers and they open up avenues for you.

Instep: Is that true of your work in Pakistan as well? Were you able to find work because female directors were eager to hire you?

Nausheen: Iram Parveen Bilal wanted a female DoP for Josh. When we connected in the States, she was happy to have met me because she never met anyone who didn’t want to direct! So that was a good fit. Other than Josh, I got to shoot for Sharmeen Obaid-Chinoy’s Peacekeepers, her documentary on the all-female UN peacekeeping force; they needed a female cinematographer to shoot inside the women’s barracks.

As for the rest, it was a lucky coincidence that the initial Jackson Heights DoP got tied up elsewhere, so Mehreen Jabbar needed a cinematographer and I needed a job! And I met Jami while shooting Josh. We developed a good working relationship, which led to my shooting of Downward Dog.

Instep: Do you think it’s harder for women to break through as cinematographers rather than writers or directors?

Nausheen: In Pakistan, women directors have gone a lot further than women in the States. Mehreen Jabbar and Marina Khan are such recognised names here. So many of the stories are based on women, whereas people are crunching numbers in the US to find out how many female actors have significant speaking parts, and the number is shockingly low. So, in that way, Pakistan is a lot more progressive. But that stops at directing, producing, writing. Every other department is filled with men.

When I shot Josh, female cinematographers were unheard of.  People asked questions like "Is there a man showing you what to do?" An extra on the last day of Josh’s shoot couldn’t believe that a woman (that is, Nausheen) was on the crane!

Instep: Why do you think there are fewer women in cinematography?

Nausheen: If we have more female role models, more women will be encouraged to enter the field, and if they won’t, then it’ll still be a boy’s club. That’s changing in the States, I think. There are more women pursuing cinematography, whether or not they’ll be able to punch through the glass ceiling remains to be seen. It may take many more years for that to happen.

One of the things that helped me in Pakistan was that I had come from the US. I had experience working there, and had a really good degree, so an established person like Jami took me seriously. I don’t think it would be that easy for young women who don’t have advantages like that.

Instep: You said you consider your work invisible - which is true, you’re supposed to allow the viewer to immerse themselves in that world. So then does it even matter if the cinematographer of a film is a man or a woman?

Nausheen: It shouldn’t, right? Every DoP says you shouldn’t even be able to tell that you shot something. But there are a few people whom I’ve met - both men and women - who say "We want a woman’s sensibility (in the shooting)", and I don’t know what that means! I know how I see the world, I don’t know if it would be different if I was a man. I suppose it would be. But through the lens, I don’t know if [my gender] makes a difference.

Instep: The argument for wanting more female directors and writers is that we want their views of the world to go out. Don’t you think cinematography is just as integral to the storytelling process?

Nausheen: Yeah, of course. I think there is a subconscious element at work. But if someone hires me for my female sensibility, I don’t know what they’re looking for. I don’t know if that has to do with the camera work. It’s also about how you approach the characters and think about their interactions, who you are more sympathetic to in a story, and how you manage your crew. I’m always told that I’m way too friendly and smile too much at the boys and they’re all falling in love with me. And I say that’s fine because if they’re working fourteen hours a day and my smiling at them makes them put the lights where I want them quickly, then I don’t care.

Instep: Could you tell us about your documentary that screened this week, The Ground Beneath Their Feet?

Nausheen: When the earthquake happened the October after my graduation, my mom was already regretting me being a filmmaker. She didn’t like my hours, and the fact that I was always gone to a new place with new people. So it’s funny that she was really encouraging about me going to a disaster zone! For her, the disaster zone was better than Hollywood!

The American coverage of the earthquake was really bad; the tragedy wasn’t given due coverage. So I went to Islamabad two weeks after the earthquake, and shot different things before I discovered that Dr. Rubina Farid and Mrs. Nafisa Khattak had set up the Melody Rehabilitation Centre as a rehab place for paralysed women. I met the two girls who are featured in the documentary. there One of the things my mentor Alan Jacobs told me that a film about paralysed people would be incredibly sad; people wouldn’t want to watch it for too long, so I went to Kashmir to meet the girls’ families, and the film then became about society and community.  These girls can’t fulfill their cultural role as wives and mothers, so what will their community allow them?

Instep: Would you like to do more stories about Pakistan for audiences in America?

Nausheen: Definitely. That was one of the reasons I went into filmmaking. I’m interested in Muslim American stories and stories from Pakistan. A lot of Muslim-Americans had a post-9/11 identity crisis, and I was one of them. I also wanted to rediscover my heritage, so I came here, but that didn’t help. Because here people call me a Mohajir or Indian because my family speaks Gujrati. My mom was born in Pakistan, but my dad India, my grandparents in Burma, me in the U.S. so maybe I’m not considered a Pakistani in Pakistan, but now it’s become my second home, and I do want to tell stories from here.

Instep: You’ve said in previous interviews you consider yourself both a local and outsider wherever you go. Do you feel more comfortable identifying yourself as a Pakistani-American filmmaker rather than a female filmmaker?

Nausheen: I will never be considered an American in America either. I’m always asked in the U.S. where I’m really from. In Pakistan, my friends call me gora. I don’t really fit in anywhere. I just want to be a citizen of the world, a filmmaker, not a Pakistani, not an American, just a storyteller.

"Women directors have gone a lot further in Pakistan than in the States."