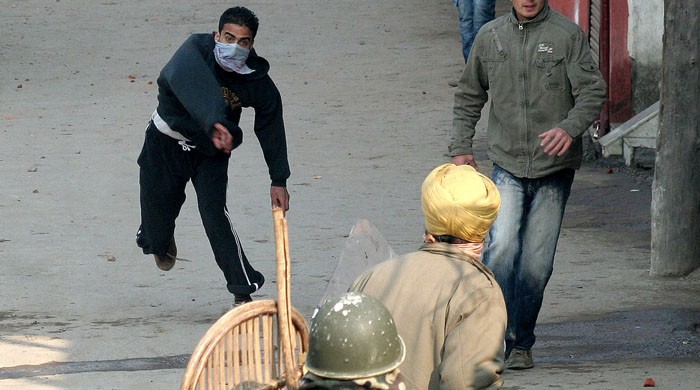 The people of Jammu and Kashmir, who have a defined historical identity, are at present engaged in a massive, indigenous and non-violent struggle to win their freedom from the foreign occupation of their land. This struggle is not motivated by bigotry or ethnic prejudice, for its sole aim is the right to self-determination of the people, irrespective of their religious affiliations and ethnic preferences.

The applicability of the principle of self-determination to the specific case of Jammu and Kashmir has been explicitly recognised by the United Nations. It was upheld equally by India and Pakistan when the Kashmir dispute was brought before the Security Council. Since with the establishment of India and Pakistan as sovereign states, Jammu and Kashmir was not part of the territory of either, the two countries entered into an agreement to allow its people to exercise their right to self-determination under impartial auspices.

It is commonly thought that the resolutions limited the choice of the people of the State regarding their future to accession to either India or Pakistan. Though understandable, the impression is erroneous because the right to self-determination, by definition, is an unrestricted right.

By entering into the agreement, India and Pakistan excluded, and rendered inadmissible, each other’s claim to the State until that claim was accepted by the people through a vote taken under an impartial authority. They did not, as they could not, decide what options the people would wish to consider. No agreement between two parties can affect the rights of a third: this is an elementary principle of law and justice which no international agreement, if legitimate, can possibly flout.

To put it in everyday language, it was entirely right for India and Pakistan to pledge to each other, as they did, "Here is this large territory; let us make its people decide its status." But it would be wholly illegitimate for them to say, "Let one of us get the territory. Let us go through the motions of a plebiscite to decide which one". That would not be a fair agreement. It would amount to telling them that they can choose independently but they cannot choose independence. It would make a mockery of democratic norms.

Kashmir was never provided the opportunity to decide its own status. What, therefore, applies to Kashmir does not apply to, for example, Assam in India or Balochistan in Pakistan.

It must be pointed out that an independent Kashmir would not be a Kashmir isolated from India and Pakistan. On the contrary, it would have close links, some of them established by trilateral treaty provisions, with both its neighbours. Indeed, it would provide them a meeting ground. In this respect, Kashmir could make a contribution to the stabilisation of peace in South Asia which no other entity can.

There is only one standing argument against an independent status for Kashmir. It is being contended that the emergence of another sovereign entity in the subcontinent would encourage secessionist tendencies in both India and Pakistan and lead to a collapse of their existing federal structures. The argument may be based on genuine fear or it may be only a stratagem to avoid a just solution of the Kashmir dispute; in either case, it can be faced rationally. When so faced, it proves to be untenable because it ignores two vital considerations.

The first is related to the sui generis nature of the question regarding the final disposition of the State. All the former territories which today are included in India or in Pakistan became legally parts of one or the other through a process which harmonised with the expressed will of their people. Kashmir is the sole exception which was never provided the opportunity to decide its own status. What, therefore, applies to Kashmir does not apply to, for example, Assam in India or to Balochistan in Pakistan.

The demilitarisation of Kashmir, to which both India and Pakistan are committed legally and morally does not, therefore, mean secession and cannot encourage separation either. Kashmir cannot be regarded to have seceded from what it never acceded to in the first place.

The second consideration which the argument ignores is that Kashmir can emerge as independent in the context of the implementation of an international agreement to which both India and Pakistan are parties. By removing the perennial cause of conflict between them, the process would encourage their mutual respect for each other’s territorial integrity and strengthen their internal cohesion. Only reliable conditions of peace and not annexation constitute an effective safeguard against disintegration.

No solution of the Kashmir problem will be just or viable if it ignores the intense and popular sentiments of the people. Justice and pragmatism require that no one of the conceivable options for the people should be excluded.