Come out of the ghettos 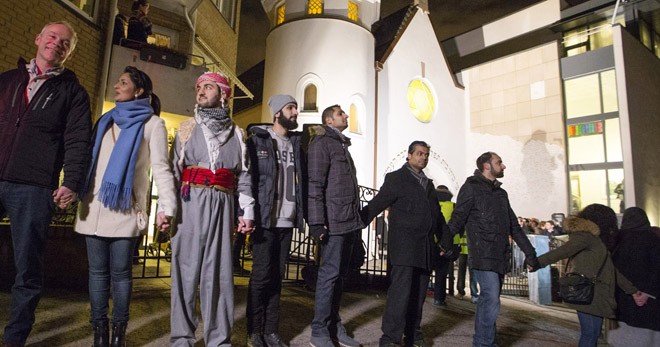 Shooting in Copenhagen during a debate on freedom of speech organised by a ‘controversial’ Swedish cartoonist Lars Vilk has shocked the world again. Europe has just recovered from the horror of Charlie Hebdo massacre. Both attacks have a common pattern; Omar Abdel Hamid El-Hussein, a Muslim youth allegedly on a rampage to take revenge from irreverent advocates of free speech in the name of religion.

Most shocking however was the reaction of Danish Muslims following the death of El-Hussein in the police shootout. Friends and other Muslims at Hussein’s funeral told the media, El-Hussein was a criminal but not a terrorist and his killing in police battle cast too many doubts over his role in the attack.

Dozens of people laid flowers in his memory at the site where El-Hussein was shot down. Muslim women and youths were seen praying for El-Hussein who killed a Danish film maker and a Jewish security guard. One person told a reporter that what Hussein did was right and every Muslim would have done the same since death was the only penalty for those insulting the Prophet. Probably realising the grim absurdity of the scene, some ‘masked’ Muslim men quickly removed the flowers from the site. But unfortunately, Muslim Danes’ tribute to Copenhagen shooter had already hit the headlines. As if it were not enough the funeral of El Hussein too was attended by hundreds of Danes in a gesture that was widely reported as a ‘sign of solidarity with the killer’ by global media.

Now most of the Muslims would say, ‘who cares what the western media says’ but will quickly quote Obama not linking terrorism with Islam during the summit on extremism in Washington. In fact the reality is that you cannot go on in a global world with ‘who cares’ ‘all lies’ attitudes especially when you are at the forefront of the ideologies terrorising the world.

Year 2015 kicked off with Europe besieged by anti-immigration right wing extremists and violently attacked by Islamists threatening the values of freedom and liberty. Islamophobia, immigration and freedom of speech have become buzzwords for the clash of civilisation enthusiasts. One notices a friction between humanity of the mourners of Charlie Hebdo or Copenhagen and those decrying Chapel Hill shooting.

A group of young Norwegians organised an event to form a human shield outside an Oslo synagogue in solidarity with Jews.

After Charlie Hebdo and Copenhagen attacks, both the French and Danish prime ministers, dismissing the rhetoric of Islam versus West, made it clear that the extremists could not terrorise or polarise Europe. Danish Foreign Minister went a step further and urged the western community to ‘react, not overreact’ to counter the threats of extremism. Muslims, however appear either clueless to the repercussions of such violence or are in a reactionary mode.

Whenever there is a terrorist attack carried out by individuals with Muslim identity, the first reaction of most Muslims is to doubt and deny the perpetrator’s conviction. The next step is to play the victim and stoke fears of Islamophobia and exaggerated backlash against Muslims living in Europe or the US.

What remains missing is a plain condemnation of the act and the loss of innocent lives.

It is ironic to note that the Copenhagen attacker opened fire on a forum of people debating Islam and freedom of speech. Are bullets the only answer to the critique of Islam? Is debate on Islam and the irrationally conservative Muslim society impossible? People, especially the westerners are inclined to conclude in the affirmative unless Muslims do not open up to dialogue.

The onus lies on Muslims living in Europe or the US to not only react but act which they seldom do in a politically correct or even morally right manner. A number of Muslims in Europe are there to escape religious persecution back home but when it comes to the issue of blasphemy and freedom of speech they tend to express their loath for the western liberalism. As el-Hussein’s therapist told NY Times, "This was a loser from the ghetto but very, very angry at the Danish society".

Recently, London witnessed a mass demonstration organised by British Muslims, already known for their most conservative brand of Islam, protesting against Charlie Hebdo for insulting the Prophet. British and European Muslims like journalist Mehdi Hasan were the quick ones to replace hashtag JeSuiCharlie with JeSuiAhmed or #IAmNotCharlie. These people make a lot of hue and cry over incidents like Chelsea fan’s racist attack on a French commuter or Capital Hill tragedy but will never mobilise young Muslim on issues like misuses of Sharia law in Muslim Britain, or the role of sectarianism and failure of Islamic societies like Iran, Pakistan, Yemen, Libya or Iraq.

The reactionary narrative in the wake of rising anti-immigration European sentiments may not do any good to the Muslims or the other immigrants in western societies. The only way forward is to come out of the ghettos and be a part of diverse liberal society. Muslims cannot afford to alienate themselves from the societies they wish to thrive in. Extremism cannot be rejected by merely using the hashtage #NotInMyName but to concede the truth that political Islam, anti-Semitism or racism have no place in any modern society.

Realising this fact, a group of young Norwegians organised an event to form a human shield outside an Oslo synagogue this Saturday in solidarity with Jews. Amazing thing about this event is that the organisers are Pakistani-Norwegians who pledged to show the world that there are Muslims who do not believe in anti-Semitism and are really up to change stereotypes. This ‘Peace Ring’ has received an overwhelming response and around 2.3K people signed up to attend the event.

Come out of the ghettos