Once a year every year, Karachi’s Beach Luxury Hotel hustles and bustles like an airport. Its ample pathways are choked with people 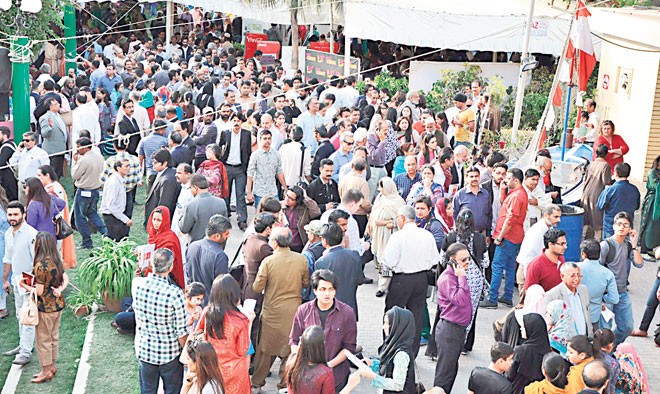 Once a year every year, Karachi’s Beach Luxury Hotel hustles and bustles like an airport. Its ample pathways are choked with people, the grass of its garden obscured by the footfall of over a hundred thousand people. There’s a clamour to reach the right destination, and confusion about where it might be. A few unperturbed souls are content with consuming pizza from the box under the sun (guilty!), but the rest scurry about, balancing bun kebab, brochure and quite possibly a bag of books, in order to not miss the take-off of their preferred session at the annual haunt of the city’s bibliophiles, the Karachi Literature Festival. Instep presents some vignettes of KLF 2015.

Locked in a session about mental health

The ‘Mental Health In A Troubled City’ session was a trap. Or one big straitjacket. Anxious Karachiites poured into the tiny Princess room by the mini-hordes, and soon realized they didn’t have room to breathe. Perhaps it was meant as a metaphor for the maddening mega-city itself. Thankfully, the esteemed panel made up for the lack of space in the rest of the room, for we were joined by four psychiatrists and an engineer/social activist (who joked about representing the troubled city in the panel).

From the prism of the December 16 attacks, the issue of rising feelings of insecurity was addressed. Naeem Sadiq called attention to the shrinking phenomenon in the city, where people are withdrawing from the shared mental, emotional, social spaces, and raising their personal barriers. He called the government ‘insane’ because they grow the problem, develop, let it become very big, then announce they’ll do something about it and then do nothing about it. Sadiq suggested that the country’s hope is in its people, who should come together in small groups for sustained action for reform, instead of reacting to situations with vigils.

Aga Khan University Hospital’s Psychiatry Department Chairman Ayesha Mian talked about the effect of insecurity on children’s psyche, and said that parents project their anxiety onto children, and thereby cultivate a culture of anxiety. She narrated incidents of children coming up with attack survival strategies like pretending to be dead, which shocked the audience. She said that to reverse the anxiety culture, we should focus on the positives, limit TV viewing and talk openly about our feelings.

In a talk centered around the international film circuit, ‘Can local cinema travel globally?’, the conversation inevitably trailed back to the need for local cinema to travel deeper within our own country. While statements of the obvious were made about the need to tell our own stories abroad as a counter narrative to the news, it was also said that there needs to be an increase in the number of filmmakers to diversify the stories being told  and we need to graduate from the propaganda films that rely on patriotism to sell.

Zinda Bhaag co-director Meenu Gaur mentioned that the rise of the multiplexes have created niche audiences for films, and it takes individual initiatives like her ‘katchi takeez’ plan for films to penetrate the market more deeply. Her mobile cinema has taken Zinda Bhaag to places like Korangi for free screenings, and she has found that her film, although mostly in Punjabi, has found appreciation even in non-Punjabi speaking communities, because the story of illegal immigration cuts across ethnicities.

Actor Sanjay Iyer talked about his film Lucia’s unique crowd funding success, which earned the film 55 lacs within a month, and then had a pay-per-view release in 27 countries through a London-based distributor called Distrify. It was clear from the talk that bypassing cinemas is a clever way to broaden the reach of films.

The power couple from Lahore enthralled audiences in two separate sessions by recounting their past. In the final moments of Najam Sethi’s talk, he talked about his relationship with Altaf Hussain, whom he frequently upsets, which result in hour-long phone calls. Sethi drew laughter and applause when he shared his unique safety mechanism with the audience, which is the simple fact that Altaf Hussain has made Jugnu Mohsin his ‘behan’. So all Najam Sethi has to do is gently remind Altaf Hussain that ‘Behan ka khayal kardiye ga’ to ensure that he doesn’t return to Lahore from Karachi in the proverbial bori!

Jugnu Mohsin began her session by recounting the origins of The Friday Times and the economic reasons behind the conception of her satirical column on its back page. While that was new information for most, what really enthralled the audience was her mimicry of everyone from Benazir Bhutto to her farm keeper. She also explained why she would never assume the voice of Altaf Hussain in her column. Simply put, it is difficult to translate a hoarsely uttered ‘Bhaaaabi’ on paper!

At one of the opening session of KLF, one saw with surprise, writers springing to the defense of technology, which is usually attributed with the decline of book reading among generations young as well as old. Veteran writers Amjad Islam Amjad, Asghar Nadeem Syed, Zaheda Hina and Neelofer Abbasi agreed that the trappings of technology, like the social media, are a tool to be used for both good and bad, and it’s up to society to cultivate a continued interest in reading.

It was only celebrated writer Haseena Moin who met expectations of Facebook-bashing, saying that she does not concern herself with Facebook or its ‘bhai behan’, which she has noticed overtaking social gatherings like weddings and funerals. Being out of the country meant she learned of the topic under discussion quite late (‘You did not check your Facebook, you mean,’ quipped Neelofer Abbasi) but Haseena Moin had written a brief piece, waxing lyrical about the leisurely joy of turning pages of a book at your own pace.

To China, with Mustansar Hussain Tarar

We went to China with the celebrated travel writer Tarar sahib, and got acquainted with the Muslim communities residing there. From refugees escaping sectarian violence to students at the medical college, there is a sizable Pakistani community living there.

The Q&A round proved to be a laugh riot, for avid readers bombarded him with a variety of questions, which were met with his volley of wit. For instance, when asked how he manages to travel to cold regions in his age, he simply said that he takes warm clothing with him, not a bikini! When a cheeky fan posed the question whether it is possible to write comprehensive travel accounts when one has their wife’s company during the journey, he said, "Why it is… in one’s old age!" The conversation took a sombre turn when fans were shocked to learn that he has been close to death more than once, due to an illness with no known cure, which keeps him eager to experience as much as life as possible in the time he has left.