"No one is expecting any miracles" 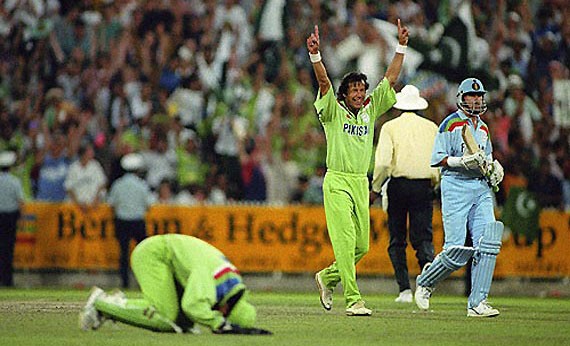 The World Cup is here again. The countdown has begun and followers across the planet are eagerly awaiting the most exciting event on the cricketing calendar. Despite the huge success of the T-20 format in the recent years, die hard supporters like me would still vote for the 50-over version at any given day, no question about that.

The Pakistan team’s recent performances in the warm-up series against New Zealand have dampened the spirits of their staunch supporters. However, there is no surprise in those losses as the team’s attack is too docile, rather impotent,while the batsmen have been unable to deliver in the build-up games.

With the likes of Australia, South Africa, and the dark horses -- New Zealand being outright favourites -- to make it to the semi-finals based on their pre-tournament form, the rest of the contenders would be fighting for the fourth and last spot.

The opening game between Pakistan and India would set the momentum for the two teams. The winner of this contest is sure to gather the energy that transforms the mild tropical depressions into those earth-shaking hurricanes.

The Indians have hardly fared well on their bouncy tracks down under. They have always boasted big names in their batting line-up, but despite that the defending champions have mostly struggled throughout the recent series and experienced heavy thrashing first at the hands of the Australians and then England in the triangular series.

Having covered Pakistan cricket extensively during the late eighties and the nineties, I tend to see a few odd similarities in the circumstances surrounding the champion team led by Imran Khan and the current squad, although the two are nowhere near each other in terms of the depth, class, versatility, and capability.

After the final test against Sri Lanka at Faisalabad in 1991-92, skipper Imran Khan came out with the strongest possible support for great Javed Miandad , who was struggling woefully with the bat at that time.

"I know some people are after Javed’s blood at the moment, but let me tell you that he is imperative for Pakistan’s chances for winning the World Cup," Imran told us in the post-match press conference on that cold, foggy afternoon at the Iqbal Stadium.

The captain’s faith in his most trusted, seasoned batsman, who was out of form before the mega event, later proved to be one of the most crucial factors in Pakistan’s only victory to date in the World Cup.

I am compelled to mention Javed Miandad’s name and contribution in the 1992 World Cup as today the team’s most seasoned batsman, Younis Khan, is facing similar challenges and questions are being raised over his inclusion in the team.

Yet, as proven time and again before, a player of Younis’ calibre could turn things around at any given day when in form. Pakistan need and expect the same role from Younis that once mighty Javed Miandad played. The opening game against India provides that ideal platform for Younis Khan to rise to the occasion and set the tone for this team, which could still topple any opposition.

The loss of pacer Junaid Khan due to injury is strikingly similar to the exit of Waqar Younis days before the 1992 World Cup. Although Waqar did retur a couple of months later to wreak havoc with the England batting, he once told me that pulling out of the squad at the last minute remained one of the greatest regrets of an otherwise illustrious career.

There is no doubt that this current Pakistan squad is down after losing one-sided games to the Kiwis.  Quite frankly, no one is expecting any miracles either. This team has an ordinary bowling attack and a consistently inconsistent batting line-up that we all know about.

Having said that, all I am expecting from team Pakistan is to play fearlessly and provide those customary spectacles of individual brilliance. Is that asking too much?

-- Usman Sherazi covered cricket and related controversies in the 1990s.

"No one is expecting any miracles"