Bringing the live act back

Four crackling live acts, dot on schedule timing, and hovering drone cameras for coverage - the Entrepreneurs Organization raised the bar on how events should be 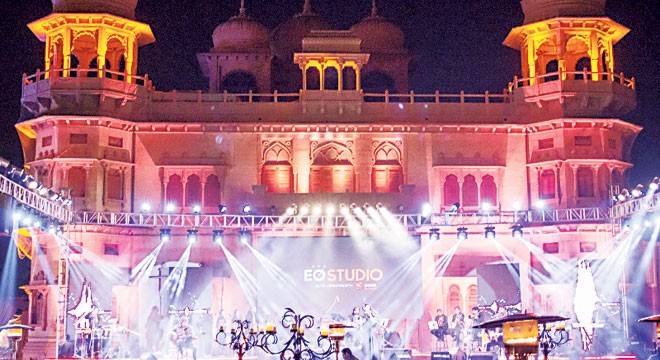 Perfection is often associated with a picture, so here’s one: Four of Pakistan’s best live acts converged on a single stage last Saturday - that alone would have made for a memorable night. Flanking that star-studded stage were sumptuous spreads of dinner and dessert (catered by The Deli and Lal’s), which made the event all the more enjoyable for its select guest list. Embellish this image further with all the details that could make it glisten: crystal chandeliers and faux candle light, plush lounges of white sofas and giant floral arrangements, and the majestic backdrop of Mohatta Palace, lit up in an alternating quartet of colours. Pictures are perfect because they are meticulously planned, and Saturday night’s event, ‘EO Studio’, was too. The event did that rare thing - start on time, early enough to have us all home before the day was done. All of this near-perfect entertainment was had for a good cause: the Entrepreneurs Organization was donating the proceeds from the event to the Indus Hospital in Karachi.

Maybe it was the anticipation of the A-list concert lineup that caused the timely arrival of that evening’s guests on the sprawling Mohatta Palace lawns. Or perhaps it was foreknowledge of Mohatta’s strict time policy or the lure of dinner, which was served before the performance. But the evening was off to a good start, simply due to the absence of a listless wait for the show to begin. Glasses clinked, spoons scraped plates and merry over-dinner chatter ensued, and before anyone knew it, the host Anoushey Ashraf had taken to the stage to announce the first act of the night. Borrowing the Coke Studio format, the Entrepreneur Organization had an 18-member house band, backing vocalists and the occasional guest musician to back the main lineup. Opening the show was the young Coke Studio sensation, Asrar, who has become a hot favourite for social dos of late. After debuting on the airwaves with his weighty Sufi rock numbers, he’s now showing the world his versatility as an artiste with his fun, light-hearted tunes. This makes him a great choice for an opening act for the A-listers, which he is poised to join soon enough. Asrar began his set with the tune that made him a household name, the soulful power ballad ‘Sab Akho Ali Ali’. He followed that up with ‘Ishq Hawa Mein’, the song he recently performed at the Pond’s Miracle Journey event. He then sang another fresh track, the jaunty ‘Cigarette’, which he dedicated to the ‘lovers’ in the audience, particularly those who are chronically smitten. He closed the set with a powerful delivery of ‘Shakar Wandaan Re’, his second Coke Studio tune. Although a great first performance, Asrar didn’t get the energetic audience that he was hoping for, a situation that improved ever so slightly as the evening progressed. The occasion was much too formal for dancing in one’s seat, let alone a full-on bhangra that Asrar had wanted. Asrar may have kicked off the show with his high-octane performance, but the energy level unfortunately dipped several notches with the following performance by Komal Rizvi. The ‘Washmallay’ girl gets full marks for her buoyant stage presence, but appearances can only help so far if they are not backed by a vocal performance to match. Her first song, again from Coke Studio, ‘Washmallay’, was passable, but then she went on to cover Adele and Abida Parveen, both choices found to be sacrilegious by various sections of the audience. She did introduce the crowd to her upcoming track ‘Beh Gaya’, which is slated for a Valentine Day release with a video directed by Adnan Sami Khan, but even the new track didn’t really make an impact. Komal Rizvi may have added some measure of diversity to the line-up, but didn’t perform as well as we would have liked. From then on, the night just got better and better. Who wouldn’t be uplifted by Sajjad Ali classics, especially when they’re the real deal, and not the covers we’re prone to hearing? The crowds enjoyed many hits like ‘Tum Naraz Ho’, ‘Bolo Bolo’, ‘Chal Rahein De’, and ’Sahil Pe Khara Ho’.  Sajjad Ali got experimental with the last number that began with ‘Paaniyon Mein’ and segued into ‘Sohni Lagdi’, which dipped from an energetic high to a very mellow low, and left a few confused by this arrangement. Sajjad Ali was joined by ace guitarist Faraz Anwar during his performances, who stayed on for most of the next act.

Meesha Shafi is a sure-shot crowd pleaser, and she did not disappoint, even when she stuck to her tried-and-tested Coke Studio tunes. Meesha sang ‘Chori Chori’, ‘Dasht-e-Tanhai’, ‘Sunn Ve Balori’ and parts of ‘Alif Allah Chambay De Booti’, which was a continuous aural treat. Meesha fans may have hoped that she’d surprise her audience with a song we’ve never heard her sing before, but her choice of songs were quite appropriate for the setting and audience.

One huge plus of the evening was the absence of the bungling intrusion that is a crane-suspended camera. The organizers used drone cameras instead, which may have buzzed like a hornet’s nest, but at least did not obstruct anyone’s line of sight. It’s nice to see organizers to get with it.

Charity events are a regular feature in our social calendar - festivals for cancer hospitals, fashion showcases for women’s empowerment, film screenings for the underprivileged - all of which are laudable initiatives. Splurging for a cause shouldn’t come at the price of lazy organization or technical difficulties. Entrepreneurs Organizations proved that point last weekend, and left no excuse for other organizers who fail to start events on time, are unable to ensure the smoothness of the technical execution of their event. In doing their part for well-executed fashionable fundraising, the Entrepreneur Organization raised their profile significantly in the public eye.

Bringing the live act back