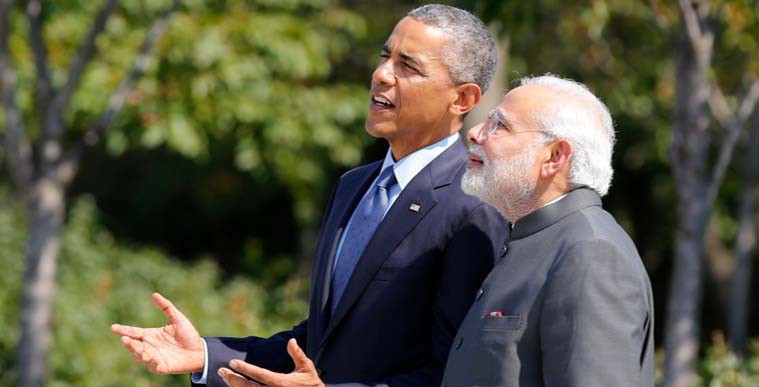 The visit by US President Barack Obama to India has to a very large extent altered the contours of the world moulded till now by the Cold War era and its complex games of blocs and allies.

With the dimensions of the world having changed since the collapse of the former Soviet Union, President Obama and his team in Washington seem willing to move on and are quite obviously looking towards India as a key ally in the region. It is of course also the only possible counterweight to China which sees itself as the biggest emerging power in the world. Obama has made it clear during his trip that India can act as a potent rival to China and balance out the play of power in a region that is crucial to the world.

Certainly this trip went far better than most Indian and American analysts had predicted, notably from the perspective of New Delhi. The US president, who quickly adopted first name terms with his Indian counterpart, with both using these during a radio programme they conducted together, went out of his way to make it clear that any past differences with New Delhi and Modi were over. Not too long ago Washington had denied Narendra Modi a visa to visit the US on the basis of his alleged involvement in the Gujarat pogroms. It seems clear that visas will not be hard for Modi to obtain from now on.

While the trip was cut short slightly, with Obama embarking on a visit to Saudi Arabia to pay his respects to the late King Abdullah a short while ahead of schedule, enough was achieved during his three-day visit to set the pattern in place.

Obama received a regal reception as he arrived in New Delhi and was treated as a guest who deserved the highest honours. He became the first US President to attend India’s Republic Day celebrations on Jan 26 and salute its brigades of troops from all three services as the Indian national anthem played. His presence at the event was symbolic of the new ties between India and the US. And there was more concrete manifestation of this as well.

The agreement on the sale of civilian nuclear energy to India by US companies, pending since 2006 because of Washington’s fears over the safe use of this technology and possible accidents, was finalised during the visit with an insurance package put in place which makes further legislation unnecessary. In addition, Obama also spoke of India as a vital partner for the future and suggested the country should as a super power have a place on the UN Security Council. $4billion were also pledged to India in investment, although talks on the precise nature of these are to continue in the coming months.

The glow of cheer which hangs over the whole of India is almost discernible.

Most importantly, perhaps, the chemistry between Barack Obama and Narendra Modi, both men who have risen from different hardships in life to acquire the top political posts in the respective countries was quite obviously warm and seemed to strike all the right notes. Coverage by the US media remained enthusiastic throughout and no detail, including the pinstriped suit Modi rather bizarrely wore, with his own name hidden in the lines was missed.

Obama also reached out to the future of India addressing a Town Hall style meeting in New Delhi hours before he left the country with many young people in attendance, along with notable Indian citizens such as Nobel Laureate Kailash Satyarthi.

So, the trip was quite obviously a success. The glow of cheer which hangs over the whole of India is almost discernible. The light does not extend across the border into Pakistan which has watched the sequence of events unfolding in New Delhi with some trepidation and much concern. It is clear that with global realities unfolding as they are, the US sees India as a potentially important friend and business partner whose vast markets offer it a great deal in commercial terms.

Islamabad will also not be pleased at the discussion held over the presence of terrorist havens in its territory and the possible threat they pose to India and the rest of the world. The extraordinary levels of security put in place during Obama’s visits were attributed in part to the danger of terrorism which could emanate from India’s immediate west.

The Jamaat ud Dawa, its role in the siege of Mumbai in 2008 and Indian allegations of Pakistan based militancy disrupting peace in Indian held Kashmir was also discussed.

From Pakistan’s point of view, then, the new engagement we seem to be seeing between Washington and New Delhi is not a happy development. We would certainly not like to see this turn into a marriage. Since the early 1950s, Pakistan has seen itself as the key US partner in South Asia. This may now be changing. It means that Islamabad will need to consider its own priorities and determine how best to live with a neighbour that over the last few months has appeared increasingly hostile but which has made friends with a nation Pakistan has by habit turned to again and again for moral support and assistance. If this support and assistance is diverted towards India, things of course will be far tougher for policy makers in Islamabad.

For now, Pakistan seems to be aligning itself to a greater and greater extent with China in the hope of bridging this gap. Whether Chinese investment and military help will be enough to counter what is for it a strategic loss as New Delhi and Washington move closer, is uncertain. But the bear hugs exchanged between the Indian and US leaders in New Delhi will obviously create a greater sense of uncertainty at home.

How we move to manage a new situation is something that will be watched with interest from around the world as South Asia undergoes what could be the biggest change in terms of its place in the world at any time over the past six and a half decades.