Finally, on the right track

Pakistanis are coming out to hold vigils against terrorism, the greatest threat to the country’s existence and freedom 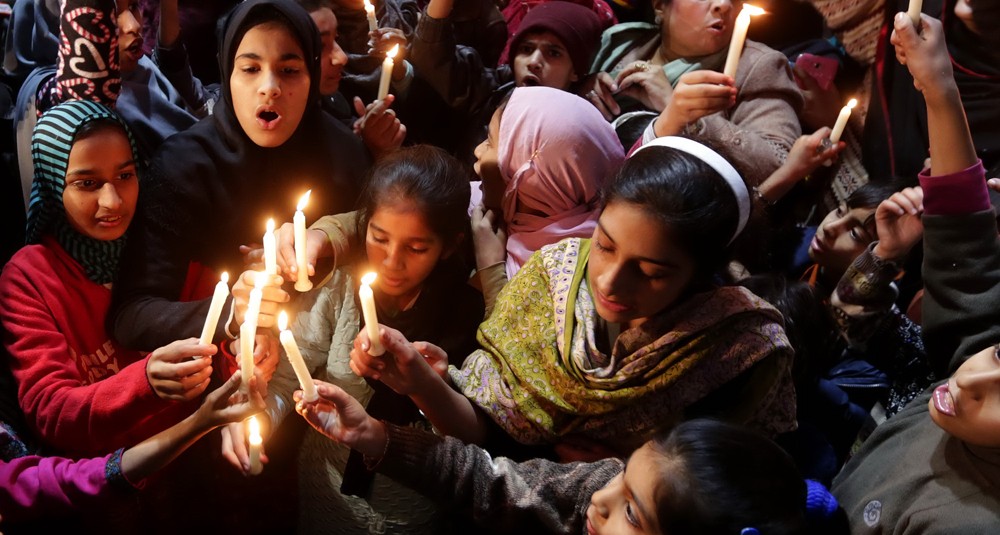 On Friday, January 16, cities around the world saw an unprecedented "global vigil" of Pakistanis against terrorism. The protests marked one month of the Peshawar army school massacre that claimed the lives of over 140 mostly schoolchildren and teachers.

The ‘religious right’, on the back foot since the massacre, has been trying to reclaim ground by demonstrating against the Charlie Hebdo cartoons. But that day, their rallies had competition, if not in the mainstream media, then certainly in the popular imagination.

"Until then, protests and vigils about Peshawar were being held in various cities. But their impact was limited. The fact that we were all connected in the Jan 16 event gave us strength," says Houston-based Mohammad Hasan who moved to North America from Karachi in 2001. "We used same videos, same pictures, same messages, same charter of demands, same press messages. We leveraged off each other’s work and resources."

In many cities, vigil organisers handed over signed copies of the "Pakistani Citizens Charter of Demands" to government representatives. In Boston, Pakistan’s long-time honourary Consul General Barry Hoffman drove in from miles away to receive the Charter at Copley Square. Despite the below freezing temperatures, nearly 200 people gathered at the venue that also has symbolic significance: that is where the Boston Marathon bombing happened two years ago, an attack stemming from the same extremist mindset that was behind the Peshawar massacre.

The seven-point charter urges the government of Pakistan to:

Arrest rogue cleric Abdul Aziz in accordance with the FIR registered on Dec. 27, 2014;

Enforce zero tolerance of hate speech or violence; involve all communities in developing a sustained movement to counter terrorism and extremism;

Protect those being attacked in the name of religion, including polio health workers;

End misuse of the "blasphemy law;" start a crackdown on all clerics and militant groups who spread Takfir (declaring others non-Muslim);

Implement Article 25-A of the Constitution of Pakistan (The right to education) "in letter and spirit," and open the ‘ghost schools’ in memory of the fallen students and teachers of the Army Public School and College, Peshawar.

(summarised from the document online: http://bit.ly/14y42FU)

These ideas are consistent with the thought behind Pakistan For All (PFA), an inter-faith citizens group formed to combat "religious and state fascism" co-founded by Karachi-based filmmaker Ziad Zafar and lawyer M. Jibran Nasir after the suicide bombing at the All Saints Church in Peshawar, September 2013 that killed some 130 people.

PFA organised human chains around churches in Karachi, a symbolic show of solidarity with Pakistani Christians that spread to other cities. Nasir engaged with the imam of his mosque, urging him to condemn the bombing, and tried to get his friends to do the same. This was perhaps a first step in the current #ReclaimYourMosques movement.

On Dec. 16, 2014, Jibran happened to be in Islamabad. Anguished at the massacre like everyone else he joined a civil society demonstration in F-7 where some 200 people had gathered with placards, lanterns and candles. Such vigils in fact were taking place all over Pakistan, indeed the world.

That was all very well, but where Nasir really wanted to protest was at Lal Masjid, the notorious Red Mosque headed by Abdul Aziz, (in)famous for having tried to flee the 2007 Lal Masjid siege in a burqa. Now he was appearing on television brazenly refusing to condemn the massacre or to term its victims ‘shaheed’ -- martyr.

Nasir decided to go to Lal Masjid and register his protest in the dragon’s lair, as it were. As he grabbed a lantern and announced that he was heading over, four others joined him: a male friend and three women. After their little vigil outside Lal Masjid, Nasir posted photos on Facebook. Then, encouraged by his friends’ response, he made a Facebook event for the following day outside Lal Masjid asking people to ‘Reclaim Your Mosque’.

Something about the idea caught popular imagination. No one had done this before. When Jibran Nasir reached Lal Masjid the following day, some supporters were already waiting for him. Dozens more showed up. Most were not vigil regulars and had never participated in protests before.

The civil society protests continued every day and the Lal Masjid occupants began to threaten them. Unsurprising given the Lal Masjid’s allegiances. They’ve named a mosque after Osama bin Ladin, and a library in its Jamia Hafsa seminary next door after Taliban leader Mulla Omar -- personalities the ‘religious’ right upholds as heroes, but who are all too clearly enemies of Pakistan.

The threats did not succeed in scaring the demonstrators away from Lal Masjid. Instead, their numbers grew. They decided to register a case against Abdul Aziz for criminal intimidation and threats of grievous bodily harm. It took another week of sustained protests and lobbying to get the police to actually register the first information report (FIR). The delay only led to the movement gaining more momentum.

The rise of social media helped grow the momentum in an unprecedented way. Supporting vigils sprang up in other cities -- Liberty Roundabout in Lahore, Press Club, Do Talwar and Teen Talwar in Karachi, and other venues elsewhere.

Nasir uses his webcam to record video logs that he posts to his Facebook pages, a tool he had started when campaigning as an independent candidate from Karachi for the 2013 polls. He didn’t win, but found it an effective way to communicate his messages.

That is how the ‘Arrest Abdul Aziz’ challenge took off. From celebrities like Taimur Rahman of Laal, actors Nadia Jamil and Samina Ahmed, and journalist Mohsin Sayeed, to dozens of unknown faces, Pakistanis at home and abroad recorded brief video messages urging the government to arrest the Lal Masjid cleric and curb terrorism.

"When you add a name and voice to the cause you give it more credibility because you are willing to publicly take ownership," Jibran Nasir told me. "It’s like having a personal conversation with the viewer."

Protest vigils are now planned on the 16th of every month to mark that fateful day in December 2014 that so many young lives were brutally ended, at least until Abdul Aziz is arrested. Plans are also afoot to open more legal fronts against him.

"This movement is not about Abdul Aziz but arresting him would be a milestone, a step in the right direction," says Jibran Nasir. "In the longer run, we are trying to build a counter-narrative and reclaim Pakistan. ‘Never Forget’."

Those who participated in the Jan 16 vigils included many who have been directly affected by terrorism.

Karachi participants included Mehrin Kauser, a college student from Quetta who lost her mother and sister in the bombing of the bus of Hazara pilgrims at Mastung a year ago. She is still undergoing medical treatment for her own injuries.

In Boston, college student Shehroz Hussain gave a moving speech calling for action against the Taliban. They killed his father Dr Riaz Hussain Shah outside his clinic in Peshawar in January 2013. Referring to the APS massacre he said, "I hope that the bodies of these flowers will go into the ground as seeds and bloom to make my city Peshawar a City Of Flowers again. We have picked up enough coffins of our loved ones and enough is enough!"

In Islamabad, where vigil organisers left 141 coffins for the government to pick up at the protest venue, Bushra Arain representing Lady Health Workers expressed her community’s resolve to be like a second army in Pakistan and to continue administering polio drops that the Taliban have forbidden. The LHVs have already paid a heavy price for what they do: Taliban have killed nearly 70 of them.

Mukhtiar Masih, whose daughter Shama -- the young Christian woman who along with her husband Shahzad was lynched on accusation of ‘blasphemy’ -- also spoke there, as did other ordinary Pakistanis from different religious and ethnic communities.

The video messages and speeches at the vigils reinforce an important signal about something that the 2013 elections had already made clear: people are overcoming their fear and they have had enough.

It’s time to change not just the policies but also the narrative in Pakistan. Time to recognize, as ShaanTaseer stresses, that "terrorism is the greatest existential threat to Pakistan’s existence and freedom."

Ordinary Pakistanis in the country are showing the way, supported by those abroad. There are indications that the political and security establishments are taking steps in the right direction too.

Could it be that after all these decades, Pakistan is finally on the right track?

Finally, on the right track