Our Rock of Gibraltar

A very professional journalist, a researcher and a very funny person, Najma Sadeque is no more 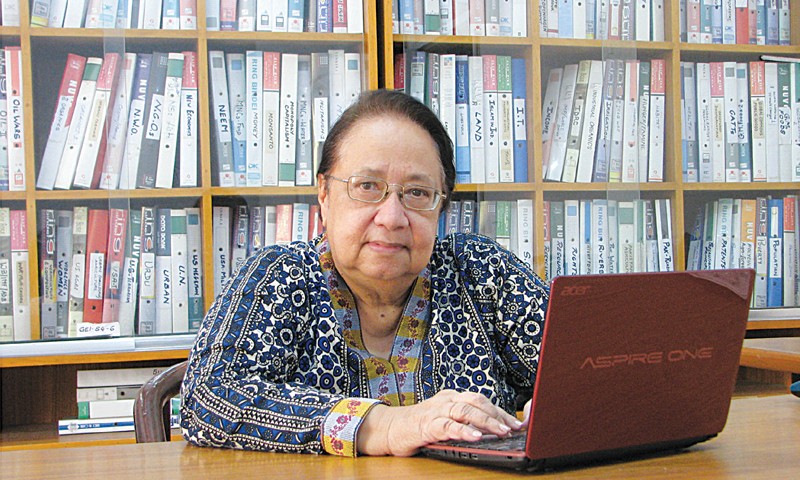 The mail was from Deneb Sumbal, while the subject line carried Najma’s name, which hadn’t happened before. She had been missing from my cyberworld for a while as her very informative articles, and very funny jokes had become few and far between.

However, I put it down to her being busy, and me being too busy to be able to go through my entire mailbox so thought I must have missed them. However, when I opened the mail, a deep sadness engulfed me. The daughter’s sad announcement of her mother’s transition from this world, intertwined with her tribute to the wonderful woman that she was, was heartbreaking.

She, and her brother Arun, whom Najma called Baba, had lost the only parent and closest friend they had known most of their life. She had been the Rock of Gibraltar not just for them, but for the small but committed band of journalists and activists who braved repression, derision and much more during the dark times of Zia.

That was the first time I saw Najma; as a rookie wannabe journalist almost awestruck by the Goliaths she and her colleagues who later on went to found Women’s Action Forum and Shirkatgah were going out to slay.

I had the good fortune of having travelled with her way back in the early 80s as part of a journalists’ delegation to Quetta to see the plight of Afghan refugees in Balochistan. That is where I got to know Najma the very professional journalist, Najma the very funny person, and Najma the very concerned mother.

Like all single mothers, she thought about her work when at home and about her children, even the welfare of their budgies, when away at work. It is hard to realise how difficult it was in the pre-cell phone and pre-email days but she did it all.

Najma was clear headed and never skirted around any grey areas and plunged headlong into issues to highlight what needed to be brought to attention. She was fiery in her reaction and her words when she got wind of a newborn thrown on a garbage dump, or someone stoned by the ‘pious’. She was prolific in pointing out the hypocrisies of society and corruption of those responsible for governance.

She had a researcher’s mind always looking deeply into all nuances of the subject matter before stamping it with her opinion. She always boldly stood by the stance she took as it was backed by solid research and facts. No one in the country could challenge her writings on Green Economies or her fight for the right of women, especially in the agricultural sector.

Through her writings in different newspapers, and her workshops, she kept picking fight with many other Goliaths who had to cower before her.

Whether it were giants like Monsanto, trying to overpower agriculture sector, or the mafia threatening environmental sustainability, or the misogynists’ trampling over women’s rights, Najma’s powerful words took them all on. Her words went beyond a mere rant, and actually presented actionable items and practical solutions to the above, while keeping a watchful eye on any commitments that had been made.

Unlike many researchers, she was always very free and open with her advice and knowledge sharing, putting her hard work within reach of other students and writers and activists. Through her writings in different newspapers, and her workshops, she kept picking fight with many other Goliaths who had to cower before her.

When her health condition limited her mobility, she kept her wide circle of friends and admirers informed and entertained through a regular stream of emails about reading material and jokes. And of course who can forget the phone calls of the compulsive-do-gooder in her to rally around her friends to help someone in need.

For me, her pride and joy, her daughter, Deneb, who followed in her mother’s footsteps, albeit through the use of a different media -- documentary making -- served as the interlocutor as she simply refused to be a part of the social media circle. Not being too net savvy, whenever I was stumped as to how to share something interesting on facebook with her as I didn’t know how to send it through email, I would tag Deneb, asking her to share it with Najma.

Najma has moved on from this life. We will also get busy in whatever we do. Deneb and Baba have the most difficult task of moving on with their lives with the central core missing. However, within the journalist fraternity, and the activist clan extending beyond WAF and Shirkatgah, there are many who will keep on missing Najma too.

Our Rock of Gibraltar