The limbo of governor’s rule 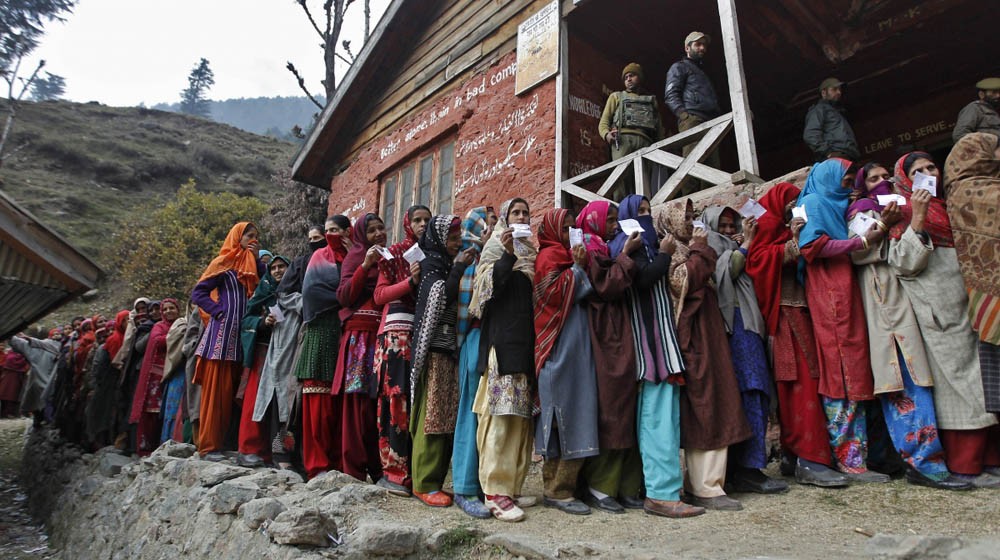 Elections have been a strategy of integration in India, periodic contests in which social groups bid for power and occupy ruling and oppositional spaces for agreed tenures. In Jammu and Kashmir (J&K), the strategy has taken a quite distinct shape. But the recent election to the J&K state assembly has led to the limbo of Governor’s rule, showing that the fault-lines in the state can at most support the burden of three cornered electoral contests. Beyond that number, the rifts acquire perhaps unmanageable proportions.

Kashmir’s evolution from a one-party state to the semblance of a competitive arena has been a slow one. Elections were once held without contest: referendum style processes involving an up or down vote, most often determined in advance. The Congress party was then the only party with legitimacy in Delhi and it ruled first by appropriating the identity of Sheikh Abdullah’s National Conference (NC) and then enfolding him within its capacious structures of patronage.

A little later, an apparent choice was offered between two parties that in reality functioned as one. A quantum leap was achieved in 2002, when the Congress and NC decided to go their own ways rather than work together in collusion to corner both the ruling and opposition spaces. The arrival of a third player at just that time built an additional prop under fragile electoral foundations. An indecisive outcome produced a creative response, with the Congress splitting the six-year chief ministerial term equally with the new entrant, Mufti Mohammad Sayeed’s Peoples’ Democratic Party (PDP). The bargaining process was tough, only consummated after a brief spell of Governor’s rule.

Elections to the state assembly in 2008 were held after prolonged agitation against an official move to hand over a portion of land within Kashmir as the permanent patrimony of a temple trust. The PDP alliance with the Congress had collapsed and the NC, now into its third generation of leadership from the Abdullah dynasty, secured an easy passage back to power.

"Patronage democracy", the unflattering epithet invented by the economist Pranab Bardhan in the 1980s to sum up aspects of India’s electoral history, has a specific relevance in J&K. Getting a reasonable number out to the ballot boxes was always a challenge in the state. While longer term issues bequeathed by the partition of 1947 persisted in the political imagination, the Kashmiri people had little incentive to confer legitimacy on the limited electoral choices offered. But the arrival of three players in the electoral arena marked a shift. At stake now was the opportunity to control levers of patronage for six-years, a prospect that led to an escalation of competition, inducing more people to come out to the polling booths.

The addition of a third player to Kashmir’s electoral arena, one who could be trusted to stay within the rules and not declare an explicit secessionist intent, was a strategic master-stroke, engineered with some finesse. But the electoral arena in J&K seemingly could not take a fourth player without risk of tipping over into a zone of renewed uncertainty. Unfortunately, ambitions unbound within the BJP after its absolute majority won in India’s parliament, did not admit for any such nuance.

"Project 45", the strategy unveiled by BJP president Amit Shah, referring to the number required for an absolute majority in J&K’s assembly, seemed a viable strategy at least as portrayed in the louder quarters of the Indian media. In 2014 parliamentary elections, the BJP had won both seats in Jammu as also the solitary Ladakh constituency. With the neutral veneer of "development" recently applied over its sectarian identity, the BJP seemed to have a realistic chance of winning a few assembly seats in Kashmir too.

The basic statistics of the election are clear enough: the BJP won the largest share of the popular vote, but turned up second in seats won. The PDP won a few votes less than the BJP, but ended up with a few seats more. Traditional power brokers -- the Congress and NC -- both turned in weaker performances than before -- though not quite so bad as to take them out of the power bargain.

Beyond this, a breakdown shows how deeply polarised the outcome has been. Of the BJP’s 1.1 million votes, fewer than 48,000 were from the Kashmir valley: it won over 93 per cent of its votes in Jammu, forfeited its deposit in most seats in Kashmir and failed to win anything in Ladakh. The PDP’s performance was likewise skewed towards the Kashmir valley but nowhere near as lopsided: roughly 27 per cent of its total votes came from the Jammu region, where it did succeed in winning two seats.

The complex arithmetic of the electoral outcome precludes a stable ruling arrangement. The Congress won 61 per cent of its total vote and four of its 12 seats from Jammu, while also sweeping all four seats in the Ladakh region. It has offered its unconditional support, but its tally does not quite put the PDP over the threshold of 45 in the state assembly.

Recognising tough realities, the PDP’s Mufti Sayeed grasped the nettle and entered into talks with the BJP. But opposition from within remains strong with the very real prospect that bringing the BJP into the structures of governance would undermine J&Klong established power-sharing compact. Organiser, the weekly mouthpiece of the BJP’s ideological fraternity, underlined this point in a recent issue, when it deprecated the "small population of Kashmiris" which suffered from "superiority complex" and were "out into the streets of Srinagar for demanding a Kashmir centric coalition".

Following his resignation as caretaker chief minister and the imposition of Governor’s rule, Omar Abdullah sprang a surprise by offering his support to a PDP-led ministry. But the PDP was quick to spurn that offer, extending the uncertainty and underlining that the single most ominous outcome of the recent election has been the removal of the conjunctive between Jammu and Kashmir.

The limbo of governor’s rule