A Q&A session with Mudassar Butt, the creator of MudToonz, a CG Cartoons/Print/Digital FX artist, and the chief player behind Comic Con PK 2014-Lahore 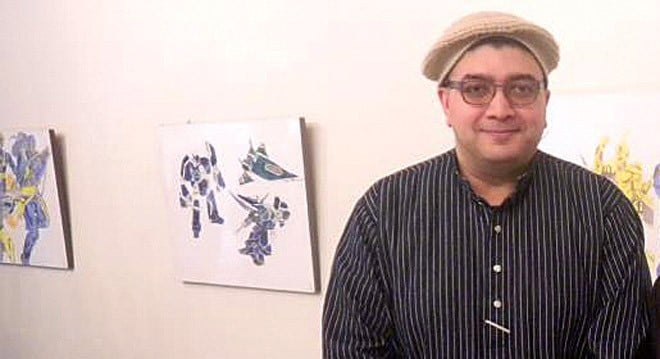 Meet "Mofu Makuragi," or Mudassar Butt, if you like -- the 32 years old, chirpy and very witty creator of MudToonz, a comic book "company" (by his own admission), a CG Cartoons/Print/Digital FX artist who has earlier taught Illustration at a vocational school, and the chief player behind Comic Con PK 2014-Lahore, the first-of-its-kind event which was held recently at the Defence Public Library.

At CCPKL, Butt showcased his latest comic book besides overseeing an eager participation from new as well as veteran humourists and comic strip artists such as Javaid Iqbal at a makeshift work station meant for children and adults alike. He says that Iqbal dubbed him "Number 19!" in a country where the field of comics is still in infancy; "only 18 professional cartoonists… are renowned."

A qualified Multimedia graduate, with a degree in IT, Butt is completely sanguine about the future, though. "2015 is going to be a golden year for Pakistan in the field of comic books, apps, games and cartoon shows," he declares, and goes on to explain how.

Comic Con, it seems, is a global event. Different cities of the world have their own Comic Cons every year. But it is absolutely new to Pakistan. Tell us briefly about its concept and how you happened to bring the event to Lahore?

Yes, it is absolutely new to Pakistan. After looking in detail at what is happening in the world we thought the Pakistani youth should have a fair share in the market of comic books. It took us a great deal of planning and hard work before we were able to launch it from Lahore, the hub of intellectual and cultural activities.

The response far exceeded our expectations (for a first time event!). We received visitors from all walks of life and from all age groups.

Do you think Comic Con PK 2014-Lahore achieved the results as desired?

It sure did. We were able to provide a platform to young and old people where they showcased their talents -- the youngest being in their pre-teens.

What was your favourite Cosplayer outfit among those by the participants in the two-day event?

I have a few favourites, actually. One of them was an outfit by Gohan (Hamza Foaad) which he wore despite the cold. He kept in character till the closing, even though he was shivering. Then there was the Death Note Duo (Arij Malik and Taha Imran) and, of course, on the second day, the boys that were dressed as Blade (Waleed Yazdani) and Cap America (The Desert Eagle Solder version Mubarak Sheikh) were also amazing. The best thing about them was that they were respectful towards each other and told me personally that they had a great time, and it showed.

Tell us a bit about MudToonz and your own evolution as a comic artist? What do you do at MudToonz? Do you work with a team of artists?

Well, we evolved over a span of 17-plus years. And, I must say that this wouldn’t be possible without the support of my parents, my family members, my teachers and, definitely, my students/apprentices.

Well, I’ve been watching Anime from age 5, and so do most of my friends on Facebook and other social media sites. Some of them also have a Japanese pseudonym. So I made one for myself. I just translated the "Veiled one" into Japanese and got "Mofu Makuragi". It’s just a pen name.

Unfortunately, Comic Strip is not a very popular form in Pakistan and not a lot of new artists are found indulging it. What is your take on this?

That is just an assumption. My company broke even within two weeks flat of printing. We are still profiting from our first comic book KoDa Ep1 and are in the process of printing another three comic books from the profits of the first.

On another note, Omar Mirza launched his series at CCNY (Comic Con New York) last year, titled Zindaan. LUCID Concepts is coming up with Bloody Nasreen and Saker series; Maria Khan has a couple of picture story books in stores; Zain Naqvi has a comic episode out on the Imran Series detective novels; Yousaf Ejaz is making an app game ‘Run Sheeda Run’ and he is also the co-creator of Burqa Avengers. Ramish Safa is doing his Caricature Shop and has made an entire comic series on the famous novel Umar O Ayaar. Maira Abbasi and Rahil are making War Monger and The Lost Gems of Mohenjo Daro. Hamza Butt and his team are making the comic series Blood Lines, due out in February this year.

Oh, and let’s not forget, Piddi by The Mango People and Numir by Numerical Studios who are making so much that your head might start spinning.

These are just a few of the people I have sat with and talked to in the past few months or so. I know for sure there are many such creative people out there in Pakistan waiting to break out.

Mark my words, 2015 is going to be a golden year for Pakistan in the field of comic books, apps, games and cartoon shows. So, I’d say, "Comic Strips is not a very popular art form in Pakistan and not a lot of new artists are found indulging it."

What future do you see for CCPK? There is word doing the rounds that the event shall soon be going to the twin cities?

We intend to take this event not only to the twin cities but also to other major cities of Pakistan every year and tap talent in order to get a bigger chunk of employment and monetary benefits for ourselves and them. CCPK is dedicated to the youth of Pakistan and their diverse skills.

Will you be introducing media and film into the convention as well along with comic artists?

Yes, we will take every talent on board inshaAllah. Comic, films and media go hand in hand.