We cannot become them 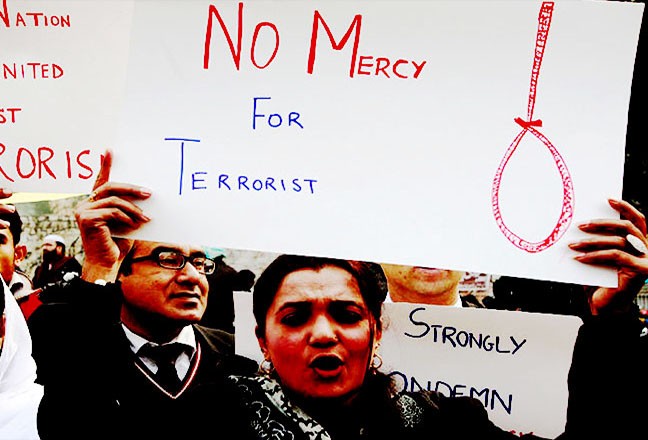 Looking back at the year 2014, December 16 sticks out as the darkest day for Pakistan. This was also the day the entire nation joined in its condemnation of the despicable terrorist attack in Peshawar, and how.

The country’s anger was not political or of concern for image but simply of humanity; the millions in green could relate to being unwary school-goers who had their dreams decapitated. But where we had our vigils, our silent protests and our solidarity walks in different parts of the city, we unwittingly gave in to what the Tehreek-e-Taliban Pakistan (TTP) probably intended to inculcate in us – bitterness. And, this bitterness has only been mirrored by organisations like the TTP and the Islamic State of Iran and Syria (ISIS); one that led us to publicly declare that we, the humans of Pakistan, consciously want public execution of terrorists – and nothing but.

I am not a TTP apologist and, trust me, I want those behind this attack to face their deserving charges as much as the person next to me but I am begging everyone who is still mourning those 140-something departed dreams to not lose our humanity like those who carried out this attack probably did.

Today, Pakistan feels hopeless and pained because it sympathises with the families of those gone and dead but we cannot build on the memories of those beautiful, young and innocent souls with death, anger and hate. Death, anger and hate are ‘virtues’ that the terrorists use to frighten us. We cannot fight fire with fire; we cannot make a right with two wrongs.

When I partook in a solidarity walk arranged by the LUMS students on Dec 17, I saw not the faces of repressed anger but of beaten down souls. It is my earnest wish from all those who shed tears for the faithful ghosts of the Army Public School, to read up on punishments such as death penalty and public execution before endorsing them.

Children, like those who were martyred on our darkest day, are not born in a society that condones violence.

While we cannot help being aggrieved for Pakistan’s sons and daughters that bade us farewell in the year just gone by, I ask you all, peacefully and silently, to not lose yourself to the hate and apathy that are attributes of our very own enemies (in this case, terrorists!) and to fight the darkness with the light in your hearts and souls.

We cannot become them