Reality is wrong. Dreams are for real - Tupac Shakur 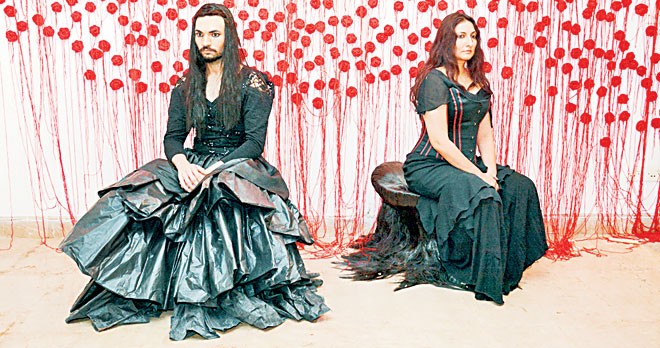 There is that age-old philosophic, esoteric and almost cryptic argument that asks whether our real everyday lives may in fact be a collective dream and whether our individual dreams in effect might be our actuality.

This was the quasi-premise of ‘Dreamscape’ a two-hour long exhibition of installation and performance art curated by Zarmeené Shah and Amin Gulgee, which wafted in a jarring reverie at the Amin Gulgee Gallery last week. Bringing together almost 50 visual, performance and theatre artists, fashion designers and musicians, the core group of about 35 Karachi-based artists had systematically met through group and separate sessions over a seven-month period with the "curatorial agenda" of enacting a kind of ‘collective dream’ via collaborations. At least a dozen non-Karachiite artists also sent a ‘dreamscape object’ that represented their individual construal of a collective reverie.

At the entrance, one was pleasantly met by fashion designer Sadaf Malaterre in a saucy corset dress with Dolly Khan sitting under what looked like a mannequin’s skirt and offering conversation, cupcakes and tea in dainty cups through an interactive installation/performance entitled ‘Tea with Alice.’ This was an indication that the rest of the trip might be either Wonderland or Mad Hatter-like.

And what followed did not disappoint.

Inside the gallery, dancer/choreographer Joshinder Chaggar high up on a pedestal, dressed in a fitted ivory sheath with her fingers painted in autumnal sienna hues representing foliage, writhed sensually in ‘The Autumn leaves’ a movement performance piece inspired by Japanese Butoh dance.

One was then immediately struck by the extensive traffic of socialites, art patrons and performers continually traversing all avenues and corners of the expansive gallery space and at times one could not distinguish players from guests just as in one’s own dreams one cannot control who will appear in them.

Seema Nusrat’s installation piece ‘Entangled’ had chairs, shoes and newspapers dangling  topsy-turvy from the ceiling while Noor Yousuf’s ‘Caged Songs’ was a glorious juxtaposition of cages  hanging vicariously over the shifting audience while two men argued over a woman in a performance piece by Umber Majeed entitled tongue-in-cheek ‘Welcome Home’

In the sad light of the tragic and horrific slaughter of 140 lives including 132 children Peshawer, some artists – including Raania Durrani with Zain Ahmed’s piece ‘Bed of Memory’, paid remembrances through their performances and installations. Sitting in grave-like sand dunes and dressed in dark shrouds they dolefully shed sequins and jewels that might have represented letting go of memories and ridding oneself of earthly possessions.

Another artistic duo Muhammad Ali (aka Mirchi Ali), dressed in a woman’s black taffeta ball gown with a similarly dressed Manizhe Ali, also sat in a mise-en-scène of mourning in front of a wall canvassed with blood red roses made of yarn. The piece entitled ‘Bleeding Love’ was an homage to victims of sectarian violence, especially Shia killings and the slain children of Army Public School.

The dour and depression-inducing theme continued with Saba Iqbal’s performance piece, ‘A Way to Somewhere Else’ which recreated a Muslim funeral where a group in mourning sat around in silence counting ritual beans, creating a circular pattern also ostensibly about loss and the continuum of life.

As if to jolt one out of one’s somber reverie, Syed Ammad Tahir, who regularly participates at Gulgee’s performance exhibitions accosted unaware walkers-by and whispered ominous words like "death"  "misery" and "pain" into their ears in his performance piece ‘Sleeptalking.’ Tahir’s performance extracted the sounds produced during Acconci’s performance but changed them into audible and comprehensive words according to his own whimsy; words produced as if under REM sleep, a para-somnia more commonly known as sleep-talking.

Agariah created a 3D model of a ‘fractal whirlpool that resembled a festive croquembouche made out of an inverted copper tree and embroidery materials such as dabka, kora, naqshi, gota, beads and crystals;  forms that moved into a whirlpool towards a central pivot point with a single source of light. Agariah, dressed as a metamorphosing wizard replete with mile-long feathered and colourful lashes canvassed by make-up wiz Beenish Parvez, wore layers of clothing which he disrobed every half hour, beginning with a cape (egg), moving to a feathered costume (caterpillar) until he was left with an exquisite wizard’s jacket and a feathered ruff, accompanied by his partner-in-magic, Saadie Sohail, a fledgling designer for Agariah’s ‘Needful Things’ jewellery line who distributed trinkets to lucky passers-by.

Pagganwala worked on the premise that to enter within the realm of one’s dreamscape one has to enter the sanctuary of one’s preliminary consciousness and to do so one has to navigate through one’s corporeal being. Pagganwala made a mould of her own body into which she filled a cake mix to create an edible cadaver (a quite delicious chocolate cake covered with pure white frosting of which I greedily ate two slices!) creating a dialogue and a maelstrom energy flow between the artist and the partaker of the cake; an ineluctably intimate and sensual experience with every bite!

Sitting crouched, Malang-like in front of a cauldron, the bearded and near-naked Shah covered in what seems like black tar continued to pour cinders from the remnants of clothing he had torched, plastering the sludge onto himself as a resuscitated salvational garment; an exercise to illustrate and denounce how humans are overly dependent on their clothes and appearance to define themselves. Visually and viscerally this performance moved me deeply, a self-confessed clothes-obsessed fashionista!

Up the stairs and on the mezzanine gallery far from any discord and in one of the more ethereal and "happy" presentations, tranquilly lay Shalalae Jamil (daughter of artist and Art teacher Nayyar Jamil) on a bed, inviting passers-by to lie down with her in a non-sexual way and survey the grey dream projected on the ceiling in the provocative sounding ‘Things that Happen in a Bed#1 which hints at a sequel.

The main gallery could have been dubbed as the ‘celeb hub’ as it held performances and installations by more mainstream, well-known "celebrities" such as Sarwat Gilani, Angeline Malik, Sikander Mufti with his pretty wife Benish Mahmood and Nadia Hussain.

Dressed in hip sporty garb and sunglasses, in the amusing and theatrical piece ‘Shut Up and Run,’ Gilani runs intermittently on a treadmill which she sees as guiding her presumably towards career, marriage and a future. She heaves and wheezes through the paces daily. Between pants she self-motivates with exclamations of ‘this is my path…this is the way I’m going to get there…to happiness…to success’ until she stops herself and exclaims ‘Oh just shut up and run!’ The treadmill in default mode is actually a crutch and is the very obstacle in her way of living a real life spontaneously. Gilani also personalized the performance by delving into her own life and in one instance exclaiming ‘divorce’ and ‘mahram’ before laughing derisively.

In ‘Unremember,’ Sikander Mufti with Benish Mahmood ask, "if dreams are so memorable, why does one forget? If forgotten, why do they recur?" and is a description of what the artist experiences upon awakening from deep dream-states. The installation comprised of an arrangement of images and objects that were symbolic of the dream-noise that has accumulated in the artist’s mind including Mahmood cutting images from photographs and diligently positing them in different juxtapositions in a repetitive loop with a suited male character berating her with a book in hand. The projection on the wall depicts a descent from the higher state of consciousness one achieves during dreams, towards the clouded state that we spend our waking lives in and what we perceive as "reality". Mannequins depict the myriad "faceless" visages that the artist’s dreams have generated over the years, mere constructs of the subconscious. The television with white-noise playing may represent hope that the artist’s accumulated dream-noise might at some point tune to become clear narratives that he can relate to others.

Angeline Malik’s performance ‘Dreams and Faceless Masks’ was a discourse on how we all travel throughout life with one thing in common: we all wear the same faceless masks which can only be distinguished through taste, smell and touch.  To this effect Malik continued to make plaster casts of her model Mahirah Abbasi’s face and arms in a calm, soothing and tactile manner.

Nadia Hussain’s rather dramatic if not a tad bit lazy installation ‘Heart on a Plate’  boldly posited an oversize heart on a piece of crockery, perhaps to illustrate how love needs to be both sacrificial and offered easily, with visitors estimating the heart’s provenance or whether it was real. I touched it and it was indeed fleshy, a friend suggesting it might have belonged to a camel due to its large size!

Literally the most bracing and energizing installation/performance was ‘Rain Shower’ by Pomme Gohar. Buoyed by the mantra  “Don’t let anyone rain on your dreams” Pomme had different personalities including fashion designer and actress Sanam Agha, businesswoman and philanthropist Tara Uzra Dawood, London-based fashion designer and fledgling actor Danish Wakeel and even the once tar-covered Vajdaan Shah enact what cleansing and healing rain meant to them and how it made them feel. They stood under a bucolic, lit rain shower: the practical businesswoman Dawood needing an umbrella; the super-ambitious Wakeel reveling with confidence and the filmi dressed Agha romancing the rain in a sari and a dupatta-veiled dulhan ( bride) literally exulting in a bridal shower!

Apart from purely visual performances ‘Dreamscape’ comprised of ‘music’ performances including ‘Dancing Nancies’ by Ali Junejo and a  ‘sound’ interactive piece ‘Seeking Security in Chaos’ by the collective TBP comprising of  mixed media installation/sound/performance artists, Zeerak Ahmed and  Abdullah Tariq Khan and mixed media installation/game developer/sound producer Danial Hyatt  who explored  the trauma of being ripped away from the womb and our repeated attempts to reconnect with all that is lost by tapping into our emotions as they slowly and inevitably slip away.

Furthermore, what was  impressive about the curatorial abilities of both Zarmeené Shah and Amin Gulgee for ‘Dreamscape’ was the mining of noted and veteran fine and mixed media artists  and sculptors including  Meher Afroz with Yasir Hussain for the performance ‘Khushbu’ and  installation ‘Qareene’ respectively,  David Alesworth’s expansive digital print ‘Garden of Babel,’ Huma Mulji’s  peripatetic installation with digital prints ‘Ward,’ Aasim Akhter’s interactive installation ‘Tryst with a Tree’ and Quddus Mirza’s quixotic object ‘Anti-clockwise.’

If there was one flaw with ‘Dreamscape’ it was the absence of a guidebook of artists’ statements so as to elucidate audiences of their artistic intent. Explained Pomme Gohar, whose company Phenomena also helped to coordinate and put ‘Dreamscape’ together, "We had planned on putting together a booklet with all the artists’ interpretative statements but funding fell short. Nowadays sponsors are open to release funds for Fashion events but not for Art."

But however impressive and personal each artist’s interpretation of dreams was, and each indubitably created a decisive impact, Willie Wonka said it best: "We are all the makers of dreams, the dreamers of dreams."  Everyone can relate to that.