Search for first XI goes on

What will cause Waqar a lot of headache is that this is the end of the ODIs for him before the World Cup team is announced. Where does he go from here except experimenting with fast bowlers who may not have featured in the ODIs this season, or at least prominently? 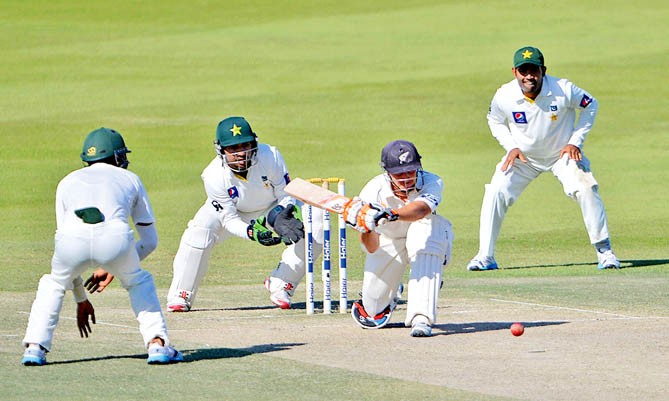 It was a game that in my opinion, and of many others I talked to, should not have been played at all. The country was in a three-day mourning after a calamitous day for all Pakistanis. That the PCB chose to play rather than postpone was a decision that will be long questioned. There is the stance that terrorists should not stop our way of life. But the very nature of the killing was so gruesome that it shook hearts in a way that a bomb blast doesn’t despite the same consequences of taking lives. That was the difference. No number of black armbands could compensate for playing cricket that day following the monumental tragedy.

Misbah-ul-Haq had said in the post-match interview after Pakistan lost the third Test against New Zealand that their minds had not been in the game after hearing of the tragic passing away of Phil Hughes. If that was at all true, how could the hearts and minds of Pakistani players been focused on this game? It showed somewhat in the way they played of course.

I feel that just like the Australians had left it to their players to opt out of the delayed opening Test against India if they didn’t feel like playing after the death of teammate Phil Hughes, PCB should have similarly left it to the players.

From what I could see during the minute of silence before the match there were a couple of players from Pakistan who had moist eyes. I’m sure that given the option the players, or at least the majority of them, would have expressed their inability to play the match. That would have left Pakistan with less than 12 players and therefore the match could not have been possible to hold.

In 2002 the New Zealanders left Pakistan in a hurry after the devastating bomb blast on the morning of the Karachi Test. The main reason was of course the security of the players although it was instantly clear that the target had been the French technicians in the bus parked across the street in front of another hotel. But I was there at the hotel that morning as players and officials walked around half dazed and remember a couple of New Zealand cricketers telling me that after what had happened they just didn’t have the stomach to play cricket.

Nevertheless the 4th ODI was held at Abu Dhabi as scheduled. From where the players found strength to play will never be clear to me. It was clear, however, that Pakistan remain, as before every World Cup, all at sea as to what their first choice XI is. Umar Akmal was drafted in place of Asad Shafiq, whose number in the batting order was taken by regular opener Mohammad Hafeez whose position was given to Nasir Jamshed. Then, Shahid Afridi gave back the No 5 position to Haris Sohail which he had hijacked for the third ODI after Haris had settled into that slot admirably in both the first two ODIs.

Younis apparently demanded his place at one down position in the batting order as that is where he wants to be considered for the World Cup. But time and again he has had false starts and I feel he is merely unsettling the batting. I say this despite the fact that he remains my favourite cricketer, a team man, someone who I feel is a great strategist and one I feel should never have been removed as the Test captain.

He was fortunate to have been dropped at slip. Otherwise he wouldn’t have got runs, a rarity for him in ODIs.

His hundred on Wednesday was his first in 75 innings and first since 2008. Whenever playing limited overs format, Younis has looked awkward, doesn’t middle the ball, fishes for balls outside off stump and puts his batting partner under pressure.

He may make the odd fifty and catch up on balls later but by that time the asking rate has often gone too far up. Exactly that happened in the 4th ODI; too much left for others to do.

It’s a totally different ball game and Younis doesn’t gel in it anymore. Maybe there is the odd chance that he’ll strike it rich on the faster tracks come February 2015 but it’s a huge risk.

There is also some experimentation going on in the bowling. It’s obvious that Waqar Younis wants to have a look at all options and so Wahab Riaz was sat down for Anwar Ali. The recurrence of injury to Umar Gul must have certainly ruffled him too as chief selector Moin Khan had said when the ODI side was announced for the series against the Australians that Umar Gul had been rested and would feature in their World Cup plans. That seems to be a plan gone awry. Now it seems all they have for sure at the moment is Mohammad Irfan, which is ironic considering that he has only just recovered after a lay-off of several months.  Sohail Tanvir remains absolutely unreliable as witnessed in that 4th ODI when he went for 0-75.

What will cause Waqar some more headache is that this is the end of the ODIs for him before the World Cup team is to be announced. Where does he go from here except experimenting with fast bowlers who may not have featured in the ODIs this season, or at least prominently? And the pitches being those of Australia and New Zealand, there is apparently little he can achieve with the spinners.

I was a bit disappointed that Pakistan did not play Yasir Shah in the 4th ODI. They should have given him at least two games to gauge his effectiveness in the limited overs format. The Black Caps are power hitters and they would have proved a good litmus test for the leggie. Waqar and other selectors on tour really should have picked him ahead of Sohail Tanvir.

Haris Sohail is doing what Aamer Sohail used to do in the 1990s. But I have a feeling he is being found out by the analysts from the opposing camps. By the time of the World Cup the coaches will be telling their batsmen how to get runs off him. Pakistan really shouldn’t expect him to carry 10 overs on his shoulders. He has risen well through the series, is wonderful talent but it would be grossly unfair to burden him with responsibility for something he didn’t originally come into the team for.

Search for first XI goes on