Recently knighted by the Kingdom of Belgium, Sister Martin is a living example of dedication and service to humanity 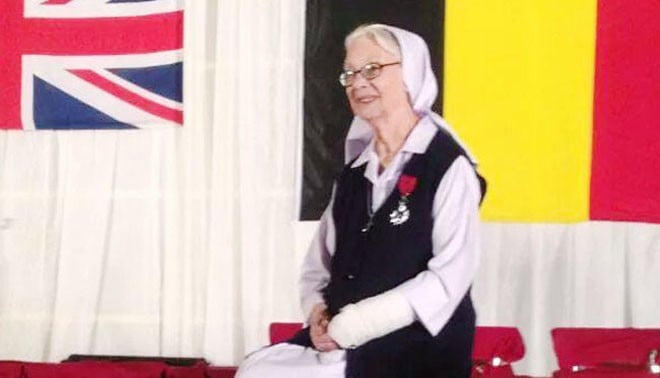 Sister Martin, a British nun, has been educating the Pakistani girls for the past more than five decades now. Her unsung devotion has been awarded only lately, that too by the Kingdom of Belgium.

She was 28 years old when she came to Lahore and dedicated herself to teaching. Eighty-four now, she still continues in her mission.

Very few people can claim to have led a more gratifying life than Sister Martin. She served in Europe for about six years when she received a call from Asia; she was needed in Pakistan. On January 5, 1958, she landed in Lahore and took her first step towards the Sacred Heart Convent School. Since 1992 she has been performing her duties as the Principal of the school.

Sister Martin was filled with the desire to change the world. Her first assignment was to teach English to Grade 4 students.

The great famine of India at the end of nineteenth century was indirectly responsible for the establishment of the school Sister Martin eventually became associated with. It is said that as many as five Belgian nuns flew down to Lahore on October 28, 1887, in response to the call of the Roman Catholic Church, in order to serve the famine-hit people of the subcontinent. They mainly cared for the orphaned children.

By 1908, the famine was over and only fifty children remained to be cared for. The fact that Sacred Heart originated from an orphanage lies at the core of the school and carries with it the distinctive warmth of a mother’s lap for all its pupils.

Some of the rooms of the orphanage were vacant back then. At the same time, financial support from abroad had been withdrawn. All efforts to bring in assistance for the remaining children had failed for one reason or the other. In this darkness, one of the Sisters came up with the idea of a school.

The first batch was inducted on June 3, 1908 with one boarder and three day scholars. The school soon grew into one big happy family composed of children from Hindu, Muslim, Parsi, Sikh and Christian households.

Sister Martin served in Europe for about six years when she received a call from Asia; she was needed in Pakistan.

Before the World War I, the number of students had touched the mark of 120. Flaunting their spotless white attire, the Sisters would walk the school alleys bursting with joy. The number of pupils crossed the 600 mark close to the Independence.

The five Belgian Sisters who devoted their entire lives tending the suffering humanity of the famine-struck subcontinent must be immensely proud in the heavens above as their efforts and sacrifices were eventually rewarded in the shape of an award to Sister Martin by the Crown of Belgium.

Sister Martin says she accepted the award on behalf of the whole school and her colleagues at present and in the past.

In retrospective, therefore, there were actually more than five Sisters from abroad who came to Lahore and devoted their lives for the service of humanity and died in the line of duty. Sister Martin is the only one who has lived to tell the stories of their courage and sacrifice to the new generation.

Her own contribution to the education of Pakistani women in particular is no less phenomenal. The quality of education and character building under her tutelage served to enlighten her students many of whom have excelled in their respective fields to do their mentor proud.

Has she never thought of returning to her homeland? What is it that has held her back to a school in Lahore?

The government of Belgium communicated at first with one of her colleagues to know if Sister Martin would be willing to accept the award. Such is the kind of reputation of a graceful and dedicated person that she enjoys.

For the uninitiated, the Order of the Crown is an order of merit awarded by the Kingdom of Belgium to people for their unmatched services in the fields of industry, commerce, science, education, military, culture and charity. The award has a very high criterion for recipients. Sister Martin has been knighted in the Order of the Crown.

For quite some time, we have not seen any nuns from abroad coming to Pakistan to serve at the Convent. The reason for this may be that no young girls in Europe are inclined towards dedicating their entire lives to this unique service. Sister Martin is perhaps the last of the greats.