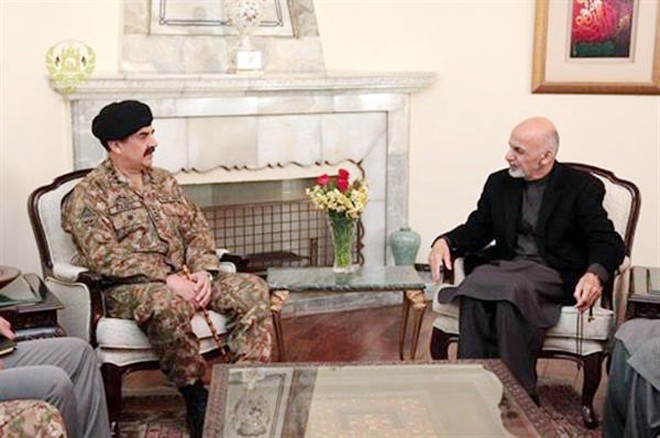 Pakistan Army Chief, General Raheel Sharif’s quick decision to visit Afghanistan in the aftermath of the horrendous attack on the army-run school in Peshawar by the militants caught everyone by surprise and fuelled speculation as to its purpose.

By the end of the day on Wednesday, when the General was back in Pakistan and had met with Prime Minister Nawaz Sharif in Peshawar to apprise him about the outcome of his Kabul visit, it was already known that he had taken evidence with him about the involvement of the Afghanistan-based Pakistani Taliban in the planning and execution of the terrorist attack on the Army Public School and College.

It is believed that most of the evidence consisted of intercepts of the mastermind of the attack, issuing instructions to the attackers from somewhere in Afghanistan. The Pakistani intelligence agencies are good at intercepting the communication between the militants and it is their main source of gathering intelligence.

General Raheel Sharif had also taken along with him the new Inter-Services Intelligence (ISI) head, Lt Gen Rizwan Akhtar, as his organisation had collected the evidence and he would have been in a better position to explain its significance. They met President Dr Ashraf Ghani, who assumed charge of his position on September 29 after formation of a US-brokered unity government with Dr Abdullah to resolve the disputed presidential election, and his civil and military aides. The Pakistani generals also held talks with the Nato forces commander in Afghanistan, General John F Campbell.

In these meetings, General Raheel Sharif sought cooperation from the Afghan government and the ISAF commander General Campbell to check the activities of Pakistani militants who are using Afghanistan’s soil to carry out attacks in Pakistan. As the military’s Inter-Services Public Relations (ISPR) and the Afghan President’s office said in statements issued to the press, General Raheel Sharif also demanded that the Tehrik-i-Taliban Pakistan (TTP) head, Maulana Fazlullah based in Afghanistan, be taken into custody and delivered to Pakistan.

While the ISPR was upbeat about the outcome of General Raheel Sharif’s visit and talks with the Afghan President and the ISAF commander as it said the last-named two had given assurances of taking action against militants operating from bases in Afghanistan. However, the statement issued by the presidential palace, Arg, in Kabul didn’t say much or give indication what President Ghani would do to disallow the use of Afghanistan’s soil for attacks against Pakistan.

It also didn’t say if the Afghan government intended to go after Maulana Fazlullah and his men hiding in Afghanistan’s eastern provinces of Kunar and Nuristan or possessed the capability to undertake any such mission.

However, the statement did mention Ghani’s commitment to fight terrorism and strive to undertake this task jointly with Pakistan. As if to remind the Pakistani visitors, the statement quoted him as telling General Raheel Sharif that Afghan children and innocent men were killed in two recent attacks carried out by the Afghan Taliban and the Haqqani network at the Istiqlal School in Kabul where the psychological impact was huge even if the casualties were few and the volleyball match in Paktika province in which 60 spectators and players lost their lives.

Though Ghani may not have mentioned it on this occasion, the Afghan officials frequently allege that leaders of the Afghan Taliban and the Haqqani network are safely ensconced in Pakistan and direct attacks in Afghanistan from Pakistani territory.

Pakistan’s civil and military officials are convinced that the unprecedented terrorist attack on the school in Peshawar was planned by Afghanistan-based Pakistani militants.

However, it soon became apparent that the Afghan ruling elite, particularly the Chief Executive Officer, Dr Abdullah, wasn’t impressed by whatever evidence the Pakistani generals had presented to Ghani. Abdullah, who is holding a position equivalent to prime minister and has had a history of unfriendly relations with Pakistan in the past, maintained that there was no proof to the claim that the perpetrators of the December 16 attack on the school in Pakistan were based in Afghanistan. He claimed that Afghanistan has never made any distinction between good and bad Taliban and demanded strong action against all the militants. As if lecturing Pakistan, he argued that the lesson one could learn from the Peshawar school attack was that the terrorists, at the end of the day, would turn against every state and all state institutions.

In fact, many Afghans are unwilling to accept reports that the Maulana Fazlullah-led Pakistani Taliban fleeing military operations in Swat district and the tribal regions of Mohmand, Bajaur and elsewhere have found refuge in Afghanistan. They also dismiss out of hand the frequent reports that these Pakistani militants have been undertaking cross-border attacks into Chitral, Upper Dir, and Lower Dir districts and the Mohmand and Bajaur agencies and causing human and material losses.

Keeping in view Abdullah’s assertions two days after the Peshawar tragedy, it is obvious that President Ghani would not be able to do much in terms of positively responding to Pakistan’s request even if he wanted to do so because he is head of a coalition government in which his former presidential election rival has been promised 50 percent share in the cabinet.

There are already problems confronting the unity government as differences between Ghani and Abdullah have caused considerable delay in forming the cabinet. They also seem to have different views in context of relations with Pakistan and peace talks with the Afghan Taliban. The US would have to constantly push the two to keep intact the unity government and make it work.

Pakistan’s civil and military officials are convinced that the unprecedented terrorist attack on the school in Peshawar was planned by Afghanistan-based Pakistani militants, but they are finding it difficult to convince the Afghan authorities about it.

The Pakistanis also claim to possess evidence that the Afghan intelligence agency, National Directorate of Security (NDS), has established links with certain Pakistani militants. The Afghans aren’t ready to concede anything. The Afghan government and its security apparatus would be willing to help Pakistan in tackling the Afghanistan-based Pakistani militants if their core demand of action against the Afghan Taliban and Haqqani network in Pakistan is accepted. And they could make an attempt to capture and deliver Maulana Fazlullah to Pakistan if it agrees to deliver the Afghan Taliban deputy leader Mulla Biradar to Afghanistan.

All this means that the Afghans would like to make a "give and take" deal with Pakistan. However, this may not happen until the Afghan government and its security forces attain the capacity to extend their control to ungoverned spaces in places such as Kunar and Nuristan and become strong enough to expel foreign militants, including Maulana Fazlullah and also keep the Afghan Taliban at bay.