With over 600 children having died of starvation in the drought-hit Thar, why was the medical team forced to return? 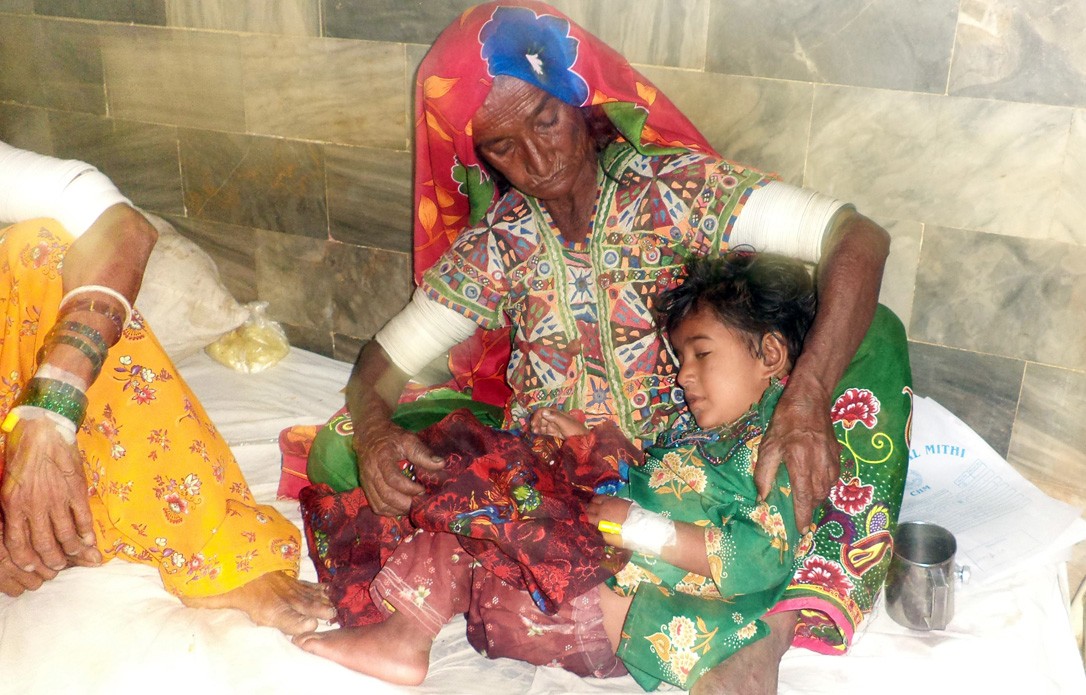 A 230-member team of doctors, specialists, gyneacologists, pediatricians, MBBS final year students, nurses and paramedics from the Liaquat University of Medical and Health Sciences (LUMHS), Jamshoro, Sindh reached Thar Desert, but was forcibly sent back by the police authorities in the last week or so.

The team that brought medicines, food items, clothes and expertise was expected to hold a four-day camp in six tehsils of Tharparkar. Besides treating patients and distributing essential supplies, the team was to conduct a survey of children’s and expecting mothers’ health.

Regrettably, the response of the Sindh government, which has ruled the province for the last seven years, has been rather callous. The government, that allows banned extremist organisations to conduct relief work in the district, refused access to this team of medical experts to hold a camp.

Thar Desert has been facing drought condition for the last three years. This year alone, reportedly 618 children have died of starvation in drought-hit Thar in Sindh. Livestock and wildlife has been destroyed as well.

But, the PPP government in Sindh led by Chief Minister Qaim Ali Shah refuses to acknowledge these deaths. In fact, it holds that the deaths were due to maternity complications than starvation.

On December 10, Vice Chancellor, LUMHS, Dr Noshad Ahmed Shaikh, addressing a press conference in Mithi announced that 230-member team would hold medical camps in six tehsils of Tharparkar in which besides treatments and distribution of medicines and food items, there would be screening of around 5000 women and children to assess their health. The findings were to be disclosed to the media.

During the press conference, he also handed over a seven-page questionnaire on dietary and medical information.

The district government of Tharparkar had made food and accommodation arrangements in six tehsils to be visited by the team and had also deployed police force for security.

As planned, on December 11, the team set up the medical camps and started treating patients who came from remote areas of the desert. They worked the entire day, treating patients, filling forms and distributing medicines, food items and clothes.

However, after a full day’s work, at night, the local police authorities asked the LUMHS team to leave the district.

"On the first day, the team members worked hard and screened a large number of women and children. The results were shocking. Possibly, the Sindh government did not want us to disclose the findings of the research on the status of health of women and children to the media. So, they forced us to leave the district immediately," says Dr Khadim Hussain Lakhair, Campus Administrator, LUMHS, who was assisting the team members in Tharparkar.

Mithi-based lawyer, Hamlesh Kumar filed an application in the court of senior civil judge, who is also nominated as the relief-inspecting judge, Mian Fayyaz Rabbani, against the local police. "A large number of people from remote villages had come to the camp. But when the camp was packed and sent back to Karachi, they were disappointed. I filed the application in the public interest," says Kumar.

In a written statement submitted to the court, Registrar LUMHS writes, "Though, it was late night and there were large number of female doctors and students in the team, but the civil and police administration ordered to leave the district in the late night, by which they forced the female staffs to go through the danger, though, we requested that we will leave in morning but they didn’t listen to us and forced us to leave in the night".

Talking to TNS, Vice Chancellor LUMHS, Dr Noshad Ahmed Shaikh says, we wanted to treat poor people, talk to them about preventable diseases, distribute free medicines and food items, and evaluate their health status -- "But we were forced to leave," adding that he was also asked to face an inquiry.

Police authorities reject these allegations and claim that the police did not force the LUMHS team out of Mithi.

In a written statement submitted to the senior civil judge Mithi, Superintendent of Police (SP) Tharparkar, Ashiq Ali Buzdar writes that no such incident was held and police has not forced the team of doctors to leave the district.

Later, while talking to TNS on phone, Buzdar said the team had left the district on their own will. "Why would we force them out? We even deployed police at the guest houses, local hotels and private residence, where team members and doctors were staying for their security."

He alleged that the LUMHS team was not serious about treating the patients. "If they were serious, they ought to have gone to the remote villages. Why did they hold a medical camp in the major cities of district, where doctors are working round the clock in government hospitals," says Malani. "The police did not force the team to leave; they just wanted media coverage. Also, the team had not sought permission from the Sindh government or the local administration," says Dr Malani.

While this issue remains to be resolved, the PPP-led Sindh government reels under this poor-health-governance controversy.