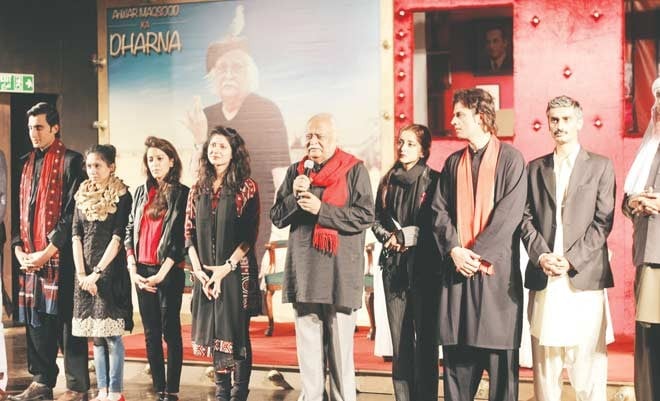 Anwar Maqsood is a man that needs no introduction; he is one of the integral identities of Pakistan’s television landscape and the one who gave us some of the most memorable and precious plays in the history of Pakistani television. Can one ever forget Aangan Terha, Fifty Fifty, Sitara Aur Mehrunissa, Studio Dhai, and Loose Talk amongst numerous others? Can we ever forget the beautiful lyrics that he has penned for Strings?

It’s incredible that after 50 years of writing successfully for television and music, this maestro should foray into theatre.

"Zia Mohyeddin, Talat Hussain and Zia Kazmi are among my close friends and they are all related to theatre," he explained when we met during the staging of Anwer Maqsood Ka Dharna. "They told me time and again to write for theatre but I kept denying until I eventually wrote a theatre script during Zia-ul-Haq’s time. Unfortunately, the censor board at that time didn’t pass it and that’s when I decided not to write for theatre. Then one day Dawar (Mahmood) and his crew showed up at my place. I didn’t know them back then but I don’t say no to meeting children so I met them. When they asked for a script I asked whether they had seen my work. What came after that surprised me to no end. Dawar and Yasir knew Aangan Terha by heart and they enacted scenes from it beautifully. Then they went on to perform episodes of Loose Talk and did justice to Moin and my roles."

Penning the script on a deadline was not easy but Anwer Maqsood did it and handed them Pawney Chaudha August three days later.

"By then my heart was convinced that they could do it," he continued talking about his first theatre project, "and I was shocked when I witnessed their rehearsal. I was really tense on the first performance of the play and I made it to the hall 15 minutes before the play began to find entrance full of people. There was a standing ovation for twenty minutes when the play ended. Meri ankhon se ansu nikal aye. It was a heartwarming moment for me."

A stage adaptation of Aangan Terha was what he wrote next and then Sawa Chaudha, a sequel to the successful Pawney Chaudha August, followed. He is now working on Sarhay Chaudha August, which is yet to be staged. It’s going to be staged throughout Pakistan even in places like Faisalabad and Multan where Kopykats have never done a play before. After being staged across Pakistan, Sarhay Chaudha August plans to go to India. Clearly Kopykats have big dreams and the immense support of a legendary writer behind them.

Coming to Anwar Maqsood ka Dharna, Anwar sahib explains how he needed a lot of research and time to write Sarhay Chaudha August and Kopykats requested for a play in between so I gave them this.

"It is inspired by the current political situation," he shared. "Dekho beta even if Imran Khan lost the (2013) elections, these dharnas have proven him a winner. My heart says that the next elections may be fair."

Anwer sahib wished Imran Khan well despite the fact that Khan’s complaints were the reason Studio Dhai got banned years ago. He furthered that the ideology behind Anwar Maqsood ka Dharna was not against any political party, in fact it supported all of them equally. It was just against a system that needs to be mended.

Talking about his future plans he mentioned writing a film for Shehzad Roy. He also shared that the Strings’ song ‘Main Tou Dekhoon Ga’ had been turned into a film script. "It revolves around children who sell newspapers on streets and it is a beautiful love story," he mentioned. "Fawad Khan and Ali Zafar have requested me for film scripts too but it all depends on time. I haven’t painted since a while and that is what pays my bills," he said with a smile.

When asked if he wrote for the audience or personal satisfaction he replied: "I have a special audience; they cannot afford cinema but they have access to television and I believe everyone has the right to entertainment and happiness. My plays are simple; they are not shot abroad. I want the basic Pakistani to be able to relate to them".

Talking about the challenges of writing political satire, Anwar sahib admitted that there are quite a few.

"Alhamra Lahore and PNCA Islamabad have denied giving permission to stage this play even though it has nothing controversial in it. Talk shows on television use vulgar language and controversy in an attempt to get ratings and yet they are aired but the efforts of these kids are not getting permission to be staged, which is just unfair".

Do these kinds of challenges discourage him?

"I have spent my entire life facing such challenges but I don’t mind," he replied. "I let it go. Studio Dhai got banned because of Imran Khan and Nawaz Sharif just because it was a satirical representation of the cricket team. I was told to either apologize on national television or the play will be taken off. I decided to take off the play because I am not going to apologize if I haven’t done anything wrong. Aangan Terha was stopped before it got completed. They told me they can ask another writer to complete it but it was beyond me to give my script in the hands of another writer. Such things happen but I keep doing my work. As a writer, I am here to stay until God keeps me alive but the government will keep changing and so will their regulations."

Anwar Maqsood admitted that writing for theatre was much more difficult than writing for television. When asked if he enjoyed writing for television more or theatre, he smiled and said, "Television has been commercialized so much that it is a disaster now. The dialogues used in plays today are something I cannot even imagine writing. Extra marital affairs and absolutely disgusting things are shown openly on television. I am happy that our young generation doesn’t watch television these days; however, girls and women do watch them, which concerns me. Television is a medium to change the nation’s thinking and it is not being used for the benefit. Morning shows tou qayamat ki nishani hain."

"I have been writing for 50 years and I don’t think any of what is being showed currently is important to write," he continued. "I really want to pass on this legacy; I want to teach someone to write but I haven’t been able to find someone who is truly inspired to learn my style of writing yet. I am beginning a workshop in collaboration with a multinational company for the youth who is passionate about writing."

And till then, he has good news for his fans: "There will be something to look forward to in January; something like Sitara Aur Mehrunissa, not a sequel though because I don’t believe in prolonging already finished stories. When I write now, it’ll be for the children and youth. They are my friends."

There was a spark in his eyes when he spoke about children, which speaks volumes about his love for them.  He mentioned working with a television channel on a project that involves teaching basic education and skills to children in return for paying them for their time.