A case for Aitchison for Girls

Education for Pakistani women deserves to have trillions spent on it. But is this the best way to spend those trillions? 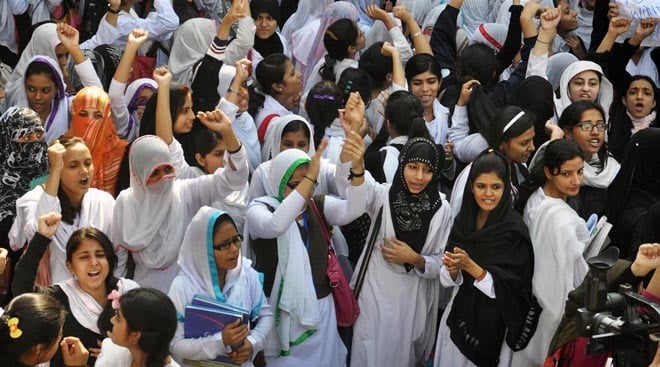 As a Pakistani male, I apologise to the women of Pakistan for all the suffering that has been inflicted on them by a patriarchal, chauvinistic and consequently male-dominated society.

But in the interests of Pakistani women, I refuse to jump on the bandwagon and support the idea of an Aitchison College for girls.

In an article (printed last week in the same space) supporting the said plan, the author claimed -- based on responses to the issue from students at Aitchison -- that the opposition (to the plan) was based largely on misogyny and that due to the multiple benefits of such a college, any opposition to it is inherently sexist.

The question the author failed to address, however, was whether there can be a rational, ‘liberal-minded’ reason to oppose an Aitchison for girls; a reason a feminist such as the author might be tempted to agree with.

Such reasons do, in fact, exist.

First off, a friend of mine (a girl and, therefore, not a misogynist) said, "You’re assuming we want the approval of a ‘masculine’ institution like Aitchison?"

And, she’s right. Why should the girls of Pakistan demand the creation of a college that seems arrogantly misogynistic, and implicitly accept that perhaps there is something good about an institution so seemingly sexist?

If, as the author implied, equality should exist to the point of uniformity, then should we make the Fatimah Jinnah Medical College for girls co-educational too, because having an all-girls college is inherently misandrist? Should highly ranked private liberal arts colleges like Mount Holyoke, Smith and Wellesly College be forced to become co-ed because they are not being strictly equal?

Of course not. It’s absurd.

According to the author, the chief benefit is that Aitchison’s reputation can be beneficial to girl students in their career prospects. Not only is that based on the incredibly sexist assumption that girls’ schools do not have such reputations, which they do, it also assumes that Aitchison’s reputation will carry over into a completely different government-run school whose only link to Aitchison is its name. But employers and admissions officers will probably know that no such link exists, so that reputation is worthless.

Back to the hypothetical co-ed Aitchison. There is a plethora of empirical evidence gathered by sociologists suggesting that in co-ed schools girls are encouraged to choose the arts and more "feminine" subjects like languages and humanities while boys are encouraged to take "masculine" subjects like the sciences. This does not happen in single-sex schools where girls have greater freedom to go into the sciences. Such an effect, clearly present in the UK, will be amplified in an uber-conservative society like Pakistan’s.

By creating a co-educational school, we’re in effect allowing the girls to be treated as if they are less intelligent than the boys. How is that not sexist?

Even if it was a separate college for girls (the gender segregation would be necessary to make the general Pakistani public agree to send their daughters to schools), what would be the opportunity cost for such a project?

The opportunity cost would be helping the girls who need it. Because with a limited budget, a government can either improve 100 local schools, serving hundreds of thousands of girls, give them books and seats and other necessities. Is that not better than building a 200-acre campus like Aitchison that serves only about 2,000 students?

In fact, the government of Pakistan will now be able to use an Aitchison for girls as a scapegoat to claim to not be sexist, while in reality, the women of Pakistan get nothing more than an empty title and continue to be mistreated. How is that fair?

I absolutely think that education for Pakistani women deserves to have trillions spent on it. But is this the best way to spend those trillions?

And, if for believing that I am dubbed a sexist, so be it.

A case for Aitchison for Girls