No unity in the government 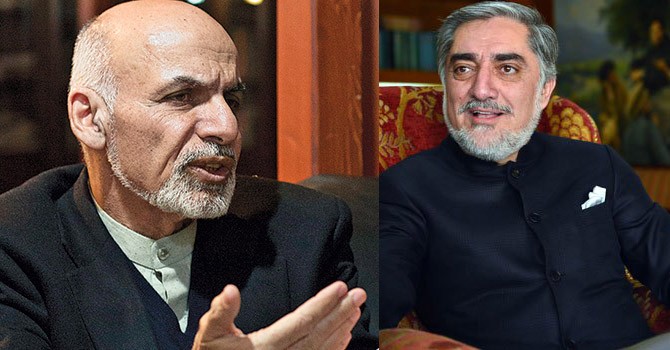 Two and a half months after the installation of the national unity government in Afghanistan, President Dr Ashraf Ghani and Chief Executive Officer, Dr Abdullah, are still trying to cope with the challenge of forming a mutually acceptable cabinet.

This isn’t the only challenge the unity government, unique in Afghanistan’s turbulent history, is facing. The security situation has deteriorated due to a dramatic increase in Taliban attacks -- the economy is in a bad shape and there is no peace process at this stage as all sides wait for the other to make the move.

In fact, there is more bloodshed as the US has intensified its drone strikes against the militants while continuing to drawdown its forces from Afghanistan, President Ghani has lifted the ban on night-time raids on suspects’ homes banned by former president Hamid Karzai, and the casualties being suffered by the Afghan security forces have increased by 20 per cent compared to 2013.

After taking oath as President on September 29, Ghani had promised to form the cabinet in consultation with Abdullah within 45 days. When he was unable to meet his own deadline, there was intense speculation that acute differences between the two had caused the delay. Before leaving for Europe to attend the Nato foreign ministers conference in Brussels and the donors’ moot in London in the first week of December, Ghani and Abdullah made it known through their spokesmen that they had reached an agreement to form a 25-member cabinet. However, the cabinet wasn’t announced and no date was given for administering oath to the ministers.

The President and the Chief Executive are now saying that the cabinet would be announced in two to four weeks. Their spokesmen and supporters are defending the delay by arguing that extreme care is being taken to appoint ministers untainted by corruption and misuse of power.

It is obvious that Ghani and Abdullah are finding it hard to put behind them the long and bitter presidential campaign in which they emerged as the front-runners after the first round and then competed against each other in the run-off vote. It was largely due to the intervention by the US that they agreed to form the unity government after the electoral deadlock when Abdullah refused to accept the election result and claimed the polls were rigged to deprive him of victory.

The new post of chief executive officer was created for Abdullah and he was guaranteed 50 per cent share in the cabinet. He would become the prime minister once the traditional Loya Jirga is held in two years’ time to approve the constitutional amendment needed for the purpose. However, one doesn’t know if Ghani and Abdullah would be able to maintain their present visibly cordial ties or would have drifted apart by that time.

The major difference with regard to cabinet formation is the allocation of the four main portfolios -- defence, interior, finance and foreign affairs. Both Ghani and Abdullah would want their nominees to be allotted these portfolios. Ghani had served as the finance minister in President Karzai’s cabinet earlier and he would like to retain the portfolio. He was also stated to be keen to appoint a person of his choice as the interior minister, and possibly the defence minister. Besides, he would be relieved if the head of the premier Afghan intelligence agency, NDS, is his nominee.

Abdullah had served as foreign minister in the Karzai government and he would like his nominee to get this portfolio along with the defence ministry. Also, there seem to be differences between Ghani and Abdullah on inducting new faces in the cabinet and sidelining those who have served as ministers and were either incompetent or were accused of corruption.

An upcoming challenge for the unity government would be formulation of a roadmap for conducting peace talks with the armed opposition, primarily the resurgent Taliban. Ghani has repeatedly opined that there is no alternative to national reconciliation for restoring peace in Afghanistan. He has refrained from criticising the Taliban too much so as not to spoil the atmosphere before any possible peace talks.

Though Abdullah has also backed peace talks with Taliban, he has all along adopted a tougher line and is opposed to making any major concessions to them. This and other issues would test Ghani and Abdullah’s ability to keep their unity government intact and make it work.

No unity in the government