A system of many falls 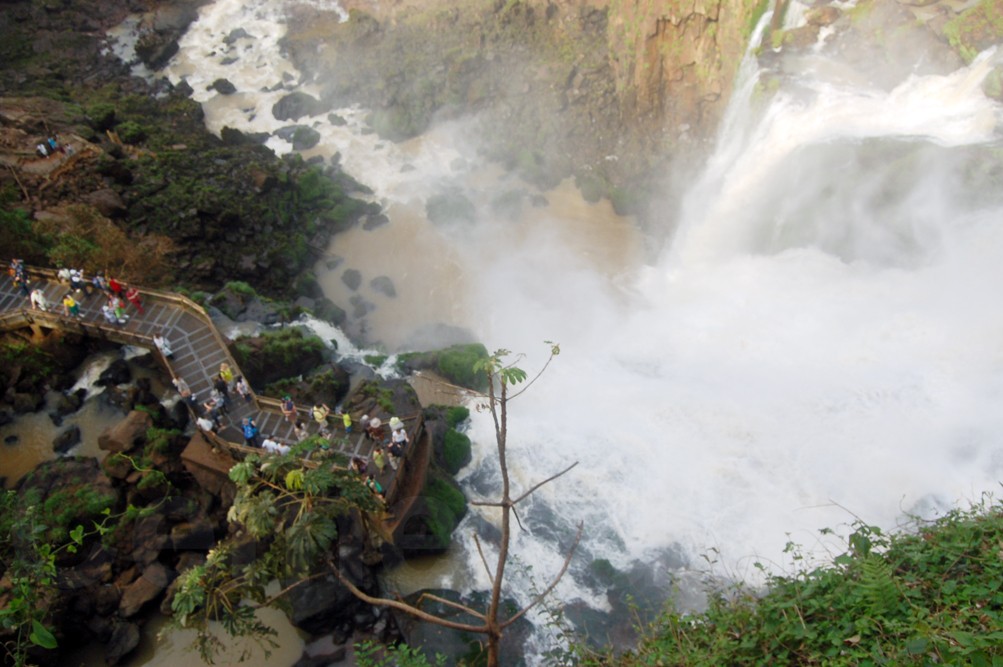 Our guidebook noted that Puerto Iguazu, the small Argentinian town at the border of Brazil and Paraguay, did not have any other tourist attraction to offer besides the Iguazu Falls.

For, with Iguazu Falls by its side, Puerto Iguazu does not need to do anything else to attract tourists.

Our trip to the Iguazu Falls had actually started a couple of months earlier, in Bogota. Having bought one-way tickets to Bogota and one-way tickets out of Santiago de Chile, we were free to choose our overland itinerary in going north to south in South America -- in 65 days.

We got greedy and included every country in between. It was Colombia, then Ecuador, then Peru, then Bolivia… but in Bolivia our plans suddenly got upended.

Originally we had thought of going to Paraguay from Bolivia, but Paraguay did not behave well. We tried to get a Paraguayan visa in Bolivia, where we were told it would take some time -- more time than we could afford to stay in one place in that fast-paced tour. What to do?

We decided to cross into Argentina. Going to Paraguay before entering Argentina would have been beneficial in another way: prospects for better use of Argentina’s blue rate. Let me explain. In a nutshell, Argentina’s bad economic policy is showing up in the difference between its official dollar rate and the black market rate (known as the blue rate, in Argentina). We wanted to travel through Paraguay to use the ATMs there to get cash in dollars. Cash US dollars stretch farther in Argentina.

Now that we were entering Argentina without replenishing our cash supply we had with us when we started the trip over a month ago, we were in a hurry to reach Uruguay, another place where the ATMs could be used to withdraw money in the US dollars. Making it quick to Uruguay meant Puerto Iguazu would not follow Cordoba in our north to south journey in Argentina -- it would be Cordoba to Buenos Aires and then to Uruguay across the bay.

Things went per the amended plan. From Buenos Aires, we took a ferry to Colonia in Uruguay. We were able to get US dollars from the Uruguayan ATMs in Colonia and Montevideo, and return to Argentina with the potence of green bucks in our pockets.

Long distance buses in Argentina are very comfortable -- in fact, fabulous would be a better adjective to describe them. The biggest issue with the long-haul buses anywhere in the world seems to be with the on-board toilets -- the toilet starts smelling a few hours after the journey begins, but not in Argentina.

In Argentina, very cultured passengers and constant upkeep make sure your trip to the bus’s toilet will be pleasant, no matter how late you make that trip. In terms of comfort and cleanliness, the Via Bariloche service bus that took us from Buenos Aires to Puerto Iguazu in 18 hours was a league beyond other services.

A while back in that trip, we had experienced firsthand the opposite seasons on the two sides of the equator. We started in June, a month of summer in the northern hemisphere. As we went south from Bogota to the equator, there was little change in the daily temperatures. Once we crossed the equator, and entered the southern hemisphere, we entered the winter season, but winter slowly became more acute as we went more and more south. And the Physics was worth appreciating. As we were going south on the globe, sunrays were becoming more slanted on the surface of the earth, and consequently less forceful in their heating capacity.

The weather started becoming really cold south of Lima. We bought winter jackets in Lima and still shivered in them in Cuzco, 11,000 feet above the sea level. Going south on the plains, away from the Andes, the temperature became milder. But still Buenos Aires was no comparison to Puerto Iguazu.

Puerto Iguazu was warm and humid. It was the kind of place you associate with the word vacation.

On our second day in Puerto Iguazu, we visited the grand tourist attraction associated with that nondescript border town. Eleanor Roosevelt is alleged to have quipped, "Poor Niagara", on seeing the Iguazu Falls the first time. No surprise there -- Iguazu Falls make a spectacular sight.

Rio Iguacu (or Iguazu River) originates in the Brazilian Highlands and travels west to form the modern day border of Brazil and Argentina. At the location of the Iguazu Falls, the river experiences a sudden drop in elevation.

The falls are divided between the two countries: Argentina and Brazil.

After the falls, the various streams meet again to continue flowing west as Rio Iguacu until the water reaches the town of Puerto Iguazu. Outside Puerto Iguazu, Rio Iguacu merges with Rio Parana and flows southwest to make the border between Argentina and Paraguay.

As nature is being slowly destroyed through human activity, whatever remains of the natural world has become precious. Time to make money on nature!

Both Brazil and Argentina are using the Iguazu Falls as a cash cow. We bought $25 tickets to enter the natural park encompassing the falls and waited at the train station. A narrow gauge train took us to the trailheads. Iguazu Falls’s visiting area is a carefully planned site. Metal planks used as walkways ensure minimised impact of visitors’ activity at the falls. We spent a couple of hours there, seeing various portions of the Falls from the ridge level and then going down to see the same streams as they hit the bottom.

Iguazu Falls is a system of many falls -- a large body of water descending to a lower level in various steps. At the center of this spectacle is the thunderous presence of water. Standing there, watching that much water falling in front of us, it was hard to imagine that large swathes of this planet were experiencing severe drought. Besides water, there was something else in abundance at the Iguazu Falls. From moss surviving on little air borne water droplets to small plants and shrubs, to large trees feeding on the water reservoir under them, to butterflies, birds, and coatis, the orchestra of life around Iguazu was touching on a crescendo.

We came back to our hotel feeling overwhelmed -- fortunate to have visited a unique natural wonder, saddened thinking about the prospects of losing all this if human beings keep messing up with their environment, and hopeful on noting the work of environmentalists and conscientious citizens in trying to save the human race from an imminent suicide.

A system of many falls