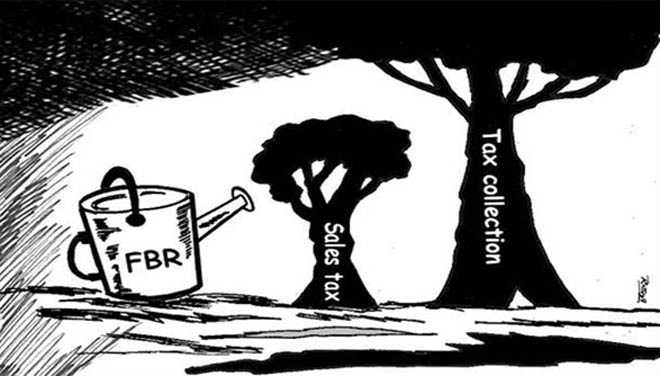 Pakistan needs a paradigm shift in tax policy and revamping of entire tax administration--establishment of a National Tax Agency, capable of generating sufficient resources for the federal and provincial governments must be the top priority. Through consensus and democratic process, all the parliaments can enact laws for establishing autonomous National Tax Agency, comprising specialists, rather than bureaucrats that would facilitate people to deal with single body rather than multiple agencies at national, provincial and local levels.

The mode and working of National Tax Agency can be discussed and finalised under Council of Common Interest [Article 153] and its control can be placed under National Economic Council [Article 156].

Taxation, a potent instrument to shape and influence the socio-economic policies of a country, has not received due attention in Pakistan. A rational tax policy discourages, even penalises, those who possess assets that are economically unproductive. Heavy taxation disincentives accumulation of such idle assets.

In social democracy, the most important objective of taxation is to provide economic justice, which relates to distribution of tax burden and benefits of public expenditure while maintaining vertical and horizontal equity. Taxing the rich for the benefit of the poor is at the core of social democracy. It encompasses, besides redistribution of wealth, such questions as treatment of weaker sections of society e.g. women and children, minorities, the disabled and unemployed. All these elements are missing in our polity and tax policy.

Unfortunately in Pakistan, successive rulers, both military and civilian, used taxes as a tool to extort from the masses as much as possible for their own comforts and luxuries. By resorting to repressive tax laws, they make the rich, richer and the poor, poorer. Our financial managers are caught up in a dilemma. On the one hand there is a mounting pressure to reduce fiscal deficit through improved collections and on the other, they are not ready to abolish innumerable tax exemptions and concessions available to the rich and mighty. They have no will to plug revenue leakages.

There cannot be two opinions about the need for major information technology and human resource improvements in Federal Board of Revenue (FBR) as well as effective audit operations, but first of all a transparent tax policy and development-oriented tax reform agenda should be made public. Tax reforms without an effective tax administration and rational tax policy are meaningless. Recently-formed Tax Reforms Commission must concentrate on suggesting establishment of National Tax Agency for achieving the goal of a functional, efficient and integrated tax administration.

Pakistan cannot improve tax collections--the potential of which is nearly Rs11 trillion--at national and provincial levels unless fundamental tax administrative reforms are taken and the same should be done under the banners of Council of Common Interest and National Economic Council. A fully automated, professional and efficient National Tax Agency would alone be in a position to improve capacity by detecting tax avoidance and evasion through tax intelligence system.

Presently, FBR is collecting 95 per cent of taxes by imposing more and more tax obligations on organisations and individuals in the form of irrational withholding tax provisions.

In Pakistan, the poor are subjected to heavy and cruel taxation to finance the luxuries of Riasti Ashrafiya. The way they waste and plunder taxpayers’ money is no secret.

Our politicians lack willingness or vision to achieve a sensible balance between income, capital and consumption taxes. They serve bureaucrats who conveniently go for ill-designed social programmes convincing politicians that these would attract more votes. The country actually needs more investments in creating human capital (e.g. education, vocational training and health), and necessary public infrastructure to increase productivity of the economy. It is by no means an easy task in Pakistan but things are improving as the public is becoming increasingly critical of laxity of politicians. They are now better informed about the impacts of undisciplined public finance.

Independent observers are providing tax data and survey showing how the rich and mighty are thriving on their money. They are also exposing figure fudging by FBR, which during fiscal year 2013-14 collected only Rs2257 billion whereas projected the figure of Rs2266 billion. In this collection, over 70 per cent were regressive taxes.

Excessive and regressive taxation prevent individuals and businesses from taking full advantage of the opportunities of the new knowledge-based economies. Taxpayers should share the burden of protecting those who are less privileged in society, either through well-designed social protection but not through excessively rigid job protection measures and inflexible labour regimes that penalise productivity. That is why a fair and transparent tax system is so essential for maximising economic growth.

In Pakistan, the poor are subjected to heavy and cruel taxation to finance the luxuries of Riasti Ashrafiya--militro-judicial-civil complex and public office holders who enjoy free perquisites, benefits, including purchase of valuable state-owned plots in prime locations at throw-away prices. The way they waste and plunder taxpayers’ money is no secret.

The country is surviving on bailouts from IMF due to perpetual failure of the ruling elite to tax the rich and mighty that matter in the Land of Pure. Revenues worth trillions of rupees have been sacrificed by governments--civil and military alike--since 1977 extending unprecedented exemptions and concessions to the privileged classes. Gradually, the federal and provincial governments since then have abolished all progressive taxes e.g. Estate Duty, Gift Tax, Capital Gain Tax etc.

The historic decision of taxing "agricultural income", passed by the Federal Parliament in the shape of Finance Act, 1977, was thwarted by the military regime of Ziaul Haq. Through this law, the Parliament amended the definition of "agricultural income" as obtaining in section 2(1) of then Income Tax Act, 1922 to tax big absentee landlords. This was a revolutionary step to impose tax on agricultural income at federal level for the first time in the history of Pakistan, but ruthlessly foiled by a military dictator.

During Zia’s rule of 11 years and that of General Musharraf for nearly 9 years, absentee land owners (including mighty generals who received state lands as gallantry awards or otherwise!) did not pay a single penny as agricultural income tax or wealth tax. Taxation of "agricultural income", at present, is the sole prerogative of provincial governments under the 1973 Constitution of Pakistan. All the four provinces have laws to this effect, but total collection in 2013-2014 was less than Rs. 2 billion (share of agriculture in GDP was about 22 per cent).

No one has calculated how much tax loss Pakistan has suffered perpetually since 1977 on account of non-taxation of agricultural income alone as suggested under Finance Act, 1977. If we add total loss of revenue through various exemptions, non-taxation of benefits given to State Oligarchy (Riasti Ashrafiya) and through Statutory Regulatory Orders (SROs) issued during the last four decades, the number comes to over Rs100 trillion--this explains how unprecedented concessions to the rich has made the state poorer rendering every citizen of this country to enormous indebtedness. We would not have required any borrowing at all, if tax losses were historically not incurred.

In a nutshell, the main goal of tax reforms should be aligned to economic policy that is how to unshackle the constituent elements of economic growth by letting market forces play their respective roles. The newly-constituted Tax Reforms Commission must stress upon the government to transfer the benefits of economic growth to enhance social wellbeing and cohesion through transparent and well-designed taxation. If this paradigm could be made to work in Pakistan, then people will reap the real advantages of paying taxes.