Interplay between free speech and the preservation of liberal ideals 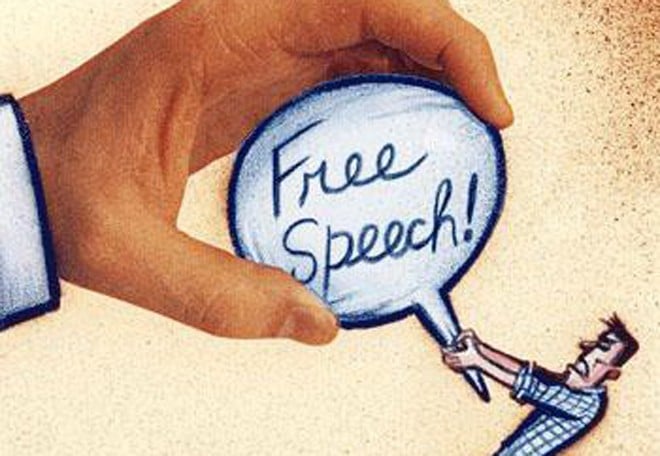 In Pakistan, we are well acquainted with the restrictions, both explicit and implicit, that police the expression of our thoughts and ideas. They shape social attitudes by determining the criterion for what is acceptable, and that which must be rejected. Blatantly misogynistic comments go unchecked while accusations of blasphemy are levied freely.

In the West, in contrast, free speech is generally, at least on surface value, conceived as an ‘absolute’ right, to be protected and safeguarded.

This conception seems to have been challenged on several university campuses in Britain recently. The interplay between free speech and the preservation of ‘liberal’ ideals has become a complex one.

Last month, the Oxford Students For Life society at Christ Church, Oxford invited two British journalists to put forth both the pro-life and pro-choice arguments surrounding the issue of abortion. The motion to be argued was ‘This House believes that abortion culture harms us all’.

However, this resulted in severe backlash by student activists, particularly the Oxford University Student Union’s Women’s Campaign. It was considered by many students to be a violation of the safe space policy -- it could be a potential trigger for women who had undergone abortion. The Women’s Campaign also challenged it on the grounds that the two speakers were both "cisgender men" who could not represent the life experiences of women adequately. They also argued that "The event description seems to suggest that increased access to abortion contributes to a ‘culture’ of ‘[treating] human life carelessly’.

Ultimately, the debate was cancelled by the college authorities, citing the reason that there was "insufficient time" to address concerns about the debate.

This incident causes us to re-examine the concept of ‘free’ speech and whether it can effectively be conceived of as an absolute right. Should the beliefs of the majority in any context be allowed to override the interests of those who may not share the same values? Who decides precisely what this ‘correct’ set of values is? Is there ever a legitimate reason to limit free speech, provided it is not hate speech or inciting violence against an individual or group?

I attend university in London, at an institution well known for its academic focus on Asia and Africa. With one of the most diverse student bodies in the country, it seems only fitting that its mission statement includes the promotion of free speech and tolerance of others’ values, no matter how much they may diverge from one’s own.

Generally, students here are also among the most politically engaged in Britain. They are passionate about a multitude of causes, ranging from advocating for fairer policies for university lecturers’ fees, to protesting against police presence on campus.

However, sometimes the narrative seems be defined by the overwhelmingly leftist views held by the majority and those who are most vocal. Dominance of certain political and social views anywhere can create a situation that excludes those who are in the minority from the conversation.

Public debates play an important role in promoting discourse about important sociopolitical issues on our campus. In one such debate, last year, I happened to be speaking on the side, opposing a different abortion-related motion -- one that supported banning the display of anti-abortion posters in the university’s common room.

My personal views on the topic are in no way reflected by this. Although, I was glad to have a platform from which to raise awareness about alternative viewpoints, such as the recognition of different cultural and religious values, and the importance of promoting debate and discussion about a contentious issue, I experienced some discomfort while giving my speech. Despite my attempts to phrase my arguments in a way that didn’t offend anyone, and conforming to the standards of political correctness that govern parliamentary-style debating today, I was conscious of the fact that some of my statements would invariably strike a discordant note with my audience.

It is crucial that we recognise the constraints we sometimes subconsciously place on the kind of values that are deemed acceptable. It is particularly important that settings like universities, that are meant to stimulate us intellectually, not become isolated bubbles where homogeneity of thought is not only encouraged but expected.

One of the most important things a study of comparative law has taught me is the recognition of context, how each legal system is shaped by the unique social and cultural conditions it exists in, and can therefore be understood only in light of those factors.

In that spirit, I believe a reductive approach towards any issue can be harmful. When the line between that which is acceptable and offensive becomes marked in any context, there is an increased likelihood of beliefs that do not adhere to mainstream ideology being shunned and rejected, often without granting their advocates the opportunity to engage in constructive discourse and defend their grounds.