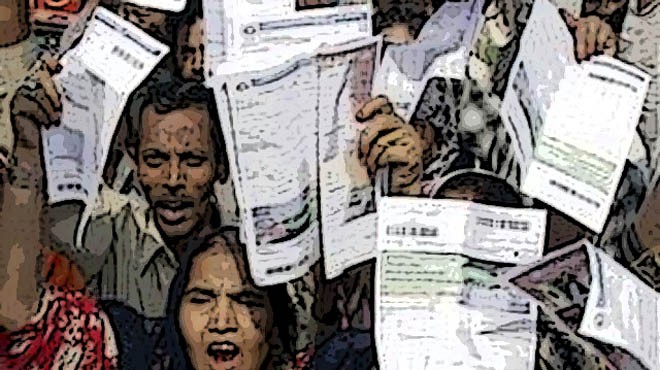 Mohammad Ramzan, a taxi driver in Islamabad, says his electricity bills in the last three months have gone up to Rs10,000 per month. Earlier, he would get a bill of Rs1000-1500 a month on average. "I earn Rs15,000 a month. I ask the finance minister to manage my household budget for November," he says, adding, "It is impossible for a common man like me to make ends meet with these inflated electricity bills."

In response to complaints from consumers, Prime Minister Nawaz Sharif constituted a committee led by Finance Minister Ishaq Dar with the mandate to fix the responsibility and evolve a mechanism to return amount to consumers charged through inflated bills.

Some estimates suggest that the government pocketed over Rs70 billion by sending inflated bills to consumers in recent months.

Will the high-powered committee break provide relief to the consumers? Because forming committees to handle a crisis has almost become a useless exercise for the governments in Pakistan.

Whether the government is serious in reforming the power sector for the benefit of the consumers remains to be seen. Rather, it seems the consumers will have to take more power shocks in months and years to come.

Dr Ashfaque H. Khan, former economic advisor and currently serving as Dean NUST, says the government has not undertaken any meaningful reforms in the power sector for the consumer -- "The issue of power sector is mis-governance. This is what we need to address."

At this juncture, the power sector is flooded with the problems, among others, of complex tariff structure, transmission and distribution, lack of clarity in subsidy policies, incomplete privatisation, etc. All these problems boil down to high electricity rates for the consumer.

In simple terms, flawed energy mix, share of hydropower declining from 47 per cent to 29 per cent between 1996 to 2001, and the average cost of generating electricity going up with increased use of furnace oil, are some of the reasons.

There are other loopholes where the losses are hidden under the carpet, such as government’s inability to recover electricity bills from Fata.

Also, the public sector units are running at the capacity of 18 to 32 per cent on average. When the electricity is produced and provided to NTDC, the total transmission losses are estimated at Rs250 to Rs300 billion.

There are other loopholes too, such as government’s inability to recover electricity bills from Fata. The ultimate loser is the consumer who pays the bill.

While National Electric Power Regulatory Authority (NEPRA) needs to be strengthened by hiring professionals who can deliver without fear or favour, strong consumer protection networks of civil society must play their role.

Genuine efforts for reforming this sector with the objective to provide affordable and uninterrupted power supply to the consumers are missing. The government is not passing on the benefits of decreased prices of furnace oil to electricity consumers in the country.

According to former finance minister, Dr Hafeez A Pasha, the cost of electricity should come down by Rs2.50 to Rs3 per/kwh after decreasing furnace oil prices in the international market.