From Waziristan to Wagah 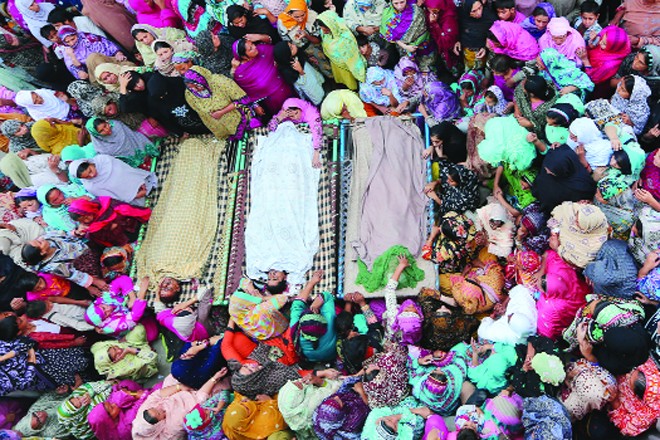 The November 2 suicide bombing at Wagah border post was in all likelihood carried out by the Jamaatul Ahraar (JA) -- an Islamic State-linked splinter group of the Tehreek-e-Taliban Pakistan (TTP) -- to avenge the Operation Zarb-e-Azab in North Waziristan.

As the blowback from the Waziristan military operation gathers pace, a human bomb blew himself up at Wagah border post during the daily flag-lowering ceremony, killing 62 people who had gone there only to watch the parade. The Wagah border crossing is the only road link between Lahore and Amritsar.

Preliminary investigations by the law enforcement agencies have given broad hints that the bomber wanted to target ground zero where the Indian and Pakistani Rangers personnel stand together to perform the daily flag ceremony. But having failed to reach his actual target due to tight security on the last gate, the bomber decided to explode himself among civilians at the end of the parade. Had the bomber managed to reach his target and killed even a single personnel of the Indian Border Security Force, there would have been the nastiest scenario at both sides of the Indo-Pak border.

In a tweet issued on November 5, the Jamaatul Ahraar spokesman Ehsanullah Ehsan said the attack was as much aimed at India as Pakistan. "This attack is an open message to both the governments across the border. If we can attack this side of the border, the other side could also be attacked."

The Wagah bombing is one of the most devastating attacks in Pakistan since the launching of the army operation in Waziristan on June 15, 2014. The terrorists selected Wagah border crossing between India and Pakistan as the target because of its symbolic value -- the border facility symbolises trade and interaction between the two nuclear armed South Asian neighbours.

Ehsanullah refuted Jandullah’s responsibility claim for the Wagah attack, saying it was simply baseless. "We will soon release the video of the attack," he said.

The attack not only demonstrates the weakness of the state to nip the evil of terrorism in the bud, it also shows that the operational capacity of the TTP-linked groups remains substantially untouched. Interior Minister Nisar Ali Khan and Inspector General Punjab Police Mushtaq Sukhera have said that there was specific intelligence information that terrorists could target the Wagah border post.

Nevertheless, the attack could not be warded-off despite the warning having been passed on to the authorities, thus presenting a serious challenge to the security establishment to brace itself for yet another wave of terror.

Three different jihadi groups -- Jamaatul Ahraar, Jundallah and Mahar Mehsud faction of the TTP -- claimed responsibility for the audacious assault which has left the agencies deeply embarrassed because of their failure to safeguard such a sensitive high-security area on the Indo-Pak border. In fact, Jundallah was the first one to have claimed the Wagah attack, though few believe that it has the capacity and the resources to do so. Even otherwise, the group spokesman Ahmed Marwat had falsely claimed many such assaults in the past.

Also, the anti-Shia Jundallah is mainly based in Balochistan and Sindh and has never carried out any such terrorist attack in Punjab in the past. Led by Commander Omar Khalid Khurasani from Mohmand agency, the Jamaatul Ahraar was the second group to have claimed responsibility, followed by the little known Mahar Mehsud faction of the TTP.

However, going by the findings of the security agencies, the responsibility claim by the Jamaatul Ahraar seems more credible. The group has the capacity and the resources to mastermind such an attack.

In an email sent to the media, Ehsanullah Ehsan, the former spokesman of the TTP and the incumbent spokesman of the Tehreek-e-Taliban Pakistan Jamaatul Ahraar (TTPJA) said: "TTPJA claims responsibility for Wagah border attack which was meant to avenge the killing of innocents by the Pakistan Army in the tribal region and to send an open message to the governments on both sides of the border. The target of the suicide attack was the Pakistani security forces which are protecting the Shia community. Our friend Hafiz Hanifullah operated the Wagah [border post] attack. This is the start of the attacks and Inshaallah we will continue such attacks in the future."

Ehsanullah refuted Jandullah’s responsibility claim for the Wagah attack, saying it was simply baseless. "We will soon release the video of the attack," he added.

The Jamaatul Ahraar was formed in August 2014 after a leadership dispute with TTP’s fugitive Ameer Mullah Fazlullah who is operating from the relative safety of eastern Afghanistan. Having abandoned the TTP, Khurasani had already declared his support to the Islamic State [which was previously called Islamic State of Syria and Iraq -- ISIS] on September 4, 2014. Khurasani is the same Taliban commander who had slaughtered 23 Frontier Corps personnel in February 2014 while the Sharif government was holding peace talks with the TTP leadership.

Quite interestingly, the magazine is published under the editorship of a former captain doctor of Pakistan Army, Tariq Ali alias Abu Obaidah Al Islamabadi. He writes in the introduction of the journal that it was an endeavour by Jamaatul Ahraar to highlight the oppression unleashed by the Pakistani security forces in the Waziristan region and to expose to the English-speaking audience the un-Islamic nature of Islamic Republic of Pakistan. The magazine also carries a picture of the Army Chief General Raheel Shareef while quoting American newspaper The Wall Street Journal as saying: "He is a moderate who views the internal threats posed by Islamic militants, especially the Pakistani Taliban, as the key challenge facing Pakistan, not the traditional enemy India".

In a video released shortly before the launching of the Ahraar magazine, Abu Obaidah Al Islamabadi claimed that his real name was Tariq Ali who had studied at some of the prestigious universities in UK like Cambridge and Imperial College London, and that he used to serve in the Frontier Corps Balochistan and 80 Infantry Brigade at Siachen being a captain doctor of the Pakistan Army.

In the 16-minute video message released by Ahraar, the group’s spokesman Ehsanullah Ehsan is shown sitting beside Capt (retd) Dr Tariq Ali who is wearing black turban and asking the Pakistani army officers and jawans to join hands with Taliban to help them enforce Shariah in Pakistan.

Claiming in fluent English that he had spent two tenures in North Waziristan and South Waziristan, Tariq Ali claims he had left the Pakistan Army after being asked to go to the Waziristan region for the third time. The video is captioned as ‘the story of a mujahid who joined Tehrik-e-Taliban Jamaatul Ahraar after abandoning Pakistan Army and a luxurious life in UK.’

The rising strength of Jamaatul Ahraar can be gauged from the November 2 statement by Ehsan Ehsanullah in an email exchange with the British newspaper The Guardian: "Jamaatul Ahraar is the real TTP now because it has been joined by so many original founders of the Pakistani Taliban. The loss of North Waziristan had not affected our fighting strength. Before the North Waziristan operation was launched by the Army, we had moved our resources and basics to safer places. Changing headquarters does not change ideologies, strategies and the desire to ruin the enemies". Ehsanullah’s claim [that the loss of North Waziristan had not affected the fighting strength of the Taliban] sounds credible, keeping in view the carnage at Wagah.

A leading English newspaper rightly noted in its November 4 editorial: "Pakistan has far too many groups with options when it comes to killing innocent Pakistanis. Until those groups are eliminated and until the steady, seemingly endless supply of suicide bombers, fidayeen fighters and sundry other militants is shut down, Pakistanis will not be safe. Unfortunately, there is little to suggest that the state knows how to rid Pakistan of the religious extremism, militancy and terrorism that has blighted our homeland for decades now."

From Waziristan to Wagah