Nishat and the single screen cinema

Nadeem Mandviwala (Nishat) feels that cinema is no longer relevant to the common man while Farrukh Rauf (Capri) believes it is still the cheapest three hours of entertainment for the people. 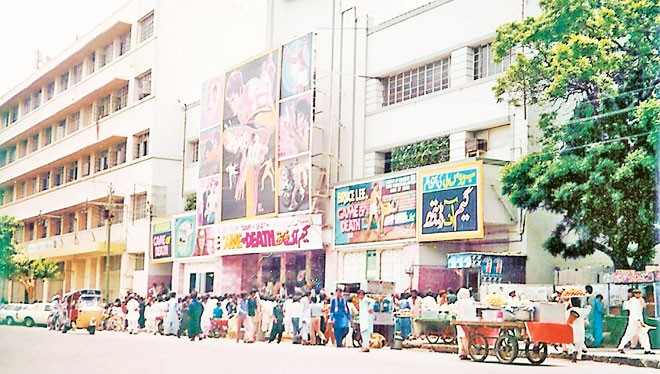 The famed former splendour of Nishat Cinema, situated on that historic stretch of standalone picture-houses on Karachi’s M.A. Jinnah Road, still survives in photographs. The cinema’s facade, stately in its symmetry, is seen decked with vivid likenesses of the people’s favourite film stars. A sign, emblazoned with the words ‘air conditioned’ in bold letters, entices with the promise of creature comforts that waited inside. People throng its entrance in an organised chaos, looking like ants swarming around a dropped sweet, from birds’ eye view.

Now, its charred rubble tells us a different story. A story that is more in tune with the news feeds of today, teeming with reminders of senseless tragedy. A story that elicits the same characteristically knee-jerk reactions of suitable outrage.

On September 21, 2012, angry mobs burned down Nishat Cinema, its neighbours Capri, Bambino and Prince, and five other cinemas in the country in a protest against a foreign film that maligned the Holy Prophet (PBUH). While Capri and Bambino were up and running before the end of that year, the worse affected Nishat continues to lie in its hollowed shell. One laments the destruction of one of the city’s most iconic landmarks, tut-tuts at the loss of the common man’s diversion, estimates the economic fallout of the incident – jobs lost and the like. But the man behind Nishat Cinema, Nadeem Mandviwala, speaks of it in purely business terms and tells us a different tale of desuetude that has swept cinemas world over.

"It’s the end of an era all over the world, not just Pakistan," Mandviwala says. "Cinema is not meant for the common man anymore." A surprising statement, for while multiplexes like the earlier built Cineplex and its swankier counterparts like Mandvi-wala’s Atrium Cinemas has drawn away the relatively affluent crowd, Nishat’s operating neighbours continue to cater to customers from the less moneyed classes. Capri Cinema director Farrukh Rauf referred to cinema as "the cheapest three-hour entertainment," while talking to Instep, for which a person pays PKR 150 for a seat in the front, PKR 250 for a seat in the rear and PKR 300 for a seat up in balcony. But Mandviwala insists that the immersive experience notwithstanding, cinema for the common man is made irrelevant by technology.

"Cinema was meant to be accessible in the ’70s, when you had to go to watch a film," explains Mandviwala, "So it was necessary to create a place that could accommodate everybody. Victorian cinemas had three to four classes – gallery, dress circle, circle and the stall – for this reason. But VCR, satellite, cable and DVD finished that. They became alternate mediums (of watching films) that reached every segment of society." Mandviwala maintains that the consequent decrease in demand has resulted in cinema becoming expensive world over, just like the advent of cinema spelled the end of theatre as common man’s entertainment by snatching away its market.

So why then do inexpensive single-screen tickets still sell with a fury in the box office, with a second run with hiked prices on the black market, we ask?

"The common man does go to the movies, but if you look at the numbers, there is no match between the earnings of a single-screen and multiplex. Nishat grossed an annual turnover of four to five crores, while Atrium earned 30 crores in its first year."

Rauf admits that Capri’s revenues may not be as good as that of a multiplex, particularly since their overheads have gone up due to improvements in the service, but maintains it is still viable to run the business, especially since the infrastructure still stands. Capri also plans on expanding with a second screen on the upper floor of its premises in the interest of accommodating English and Pakistani films.

"If the infrastructure already exists, it’s okay to keep it running. But it doesn’t make financial sense to rebuild Nishat again," says Mandviwala, bringing the conversation to its intended destination, the future of Nishat Cinema, "Even if the government compensates with two or three crores, I’m not going to put in an additional five crores to rebuild it."

Barring its commercial use, there are many who feel that Nishat was an important part of Karachi’s landscape. Haven’t people entreated him to rebuild it for nostalgia’s sake?

"Why do you think there would be any remorse for cinemas?" he asks, rubbishing these romantic notions. "We don’t have remorse for people. Why would we have it for buildings?"

"Landmarks are always preserved; they are a part of history. That was our intention in keeping Nishat Cinema going – its forty years of heritage," he continued, "But M.A. Jinnah Road continues to be a high-risk area."

In addition to the government’s failure to compensate for the cinema owners’ losses, it has also not acted to prevent the incident from recurring in the future. The closed cinemas were an easy target for protestors, incurring only property damage and no loss of life. On the day of the incident, the main procession had passed peacefully, and a smaller group had come from behind the cinemas and purposefully attacked. And they got what they wanted: the news was broadcasted by CNN, BBC, the world over.  Still, instead of delegating the area as a red zone, a no-go area for processions, the governor allowed another rally through two days after the arson incident.

"It’s vulnerable. It will always be vulnerable. Like they say, pehli baar ghalati, doosri baar nadani. It will be a great folly on my part to make the same mistake twice. Should I make a fort to protect it? Mein cinema banao, ya qila banao? I’m in the business of entertaining, not making forts," he says with a another laugh.

"Frankly, I don’t think anything can be done. It’s not about whether society wants it or thinks it should be preserved. It’s more the question of the economics and viability of the place," he said conclusively.

Nishat and the single screen cinema