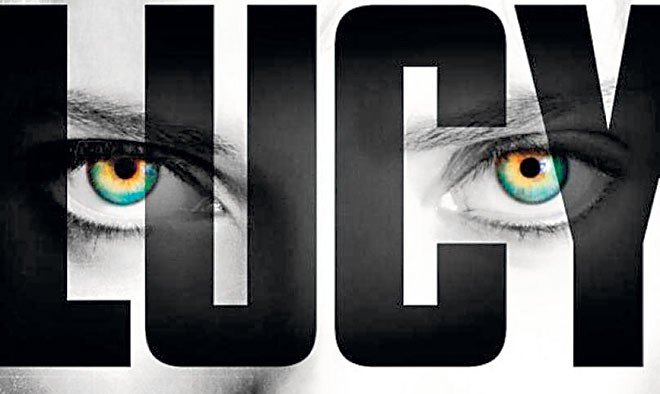 Luc Besson’s movies often have the ability to make ridiculousness and outrageousness thoroughly enjoyable. The Fifth Element, for example, is about as much fun as any space-romp, faux-SF, action flick has any right to be, filled as it is with a chock full of ideas, the movie deliciously bouncing from one amusingly preposterous notion to the next. In Lucy, the French director, takes that same sense of audacious outrageousness and mixes it with some Kubrick inspired philosophising and psychedelica (I think Besson must have boned up on 2001: A Space Odyssey before embarking on shooting for this movie) and some really bad science (riffing off the myth that human beings only use 10% of their brains) to deliver us an engaging, enjoyable piece of hokum.

Besson’s secret weapon is Scarlett Johansson, fresh off Under The Skin, the movie where she plays an alien disguised as a human. Here she is very much a human but a human very much on the way to becoming something more than thanks to a series of unfortunate (or should that be fortunate) events. With Under The Skin and 2013′s smartest movie, Her (where Johansson was the voice of an operating system which achieves sentience) and now Lucy, the husky voiced actress appears to have a lock on playing alien/non-human goddesses, and we’re powerless to resist.

The movie’s conclusion may leave many scratching their heads (and it is a bit drawn out) but overall this is still quite a bit of fun. Morgan Freeman provides his usual gravitas (he could tell you that night is day and you would believe him) and the original Old Boy himself, Choi Min-sik is on hand to provide the menace which Lucy has to combat on her path to possibly achieving omniscience.

A group of young boys, their memories wiped clean except for their names, find themselves in a huge enclosure ringed by massive concrete walls and from which there is no escape. They now have to adapt to their new environment, establish a working society based on groups (each group is assigned a specific task, somewhat echoing the factions of the Divergent series), and try and figure out a way beyond their concrete prison.

Adapted from the James Dashner-penned YA (Young Adult or Yet Another) novel of a dystopian future (a la The Hunger Games and Divergent), The Maze Runner has an intriguing enough set-up. This could be "Lord Of The Flies" married to something like Sartre’s "No Exit" – an opportunity to explore themes of society (individual welfare versus the common good), the meaning of humanity, existentialism, nurture vs. nature, and so on while providing thrilling action as well.

Unfortunately, the movie is about as deep and thought-provoking as the latest issues of GT or Hello magazines, the action is limited, and the plot completely falls apart in the second half as some secrets are revealed that make absolutely no sense. Not having read the novel on which the movie is based, I’m not sure whether the weakness lies in the source material or the adaptation efforts of debutant director Wes Ball and screenwriters Noah Oppenheim and Grant Pierce Myers and T.S. Nowlin. Whatever the case, it is hard to buy into the scenario presented on screen. Worst, the movie ends on a note which is basically just a set-up for the already announced sequel with no satisfying concluding payoffs of its own.

Cut to chase: A reasonably interesting setup which never delivers on its potential