Will Governor Punjab Mohammad Sarwar be changing his course soon? 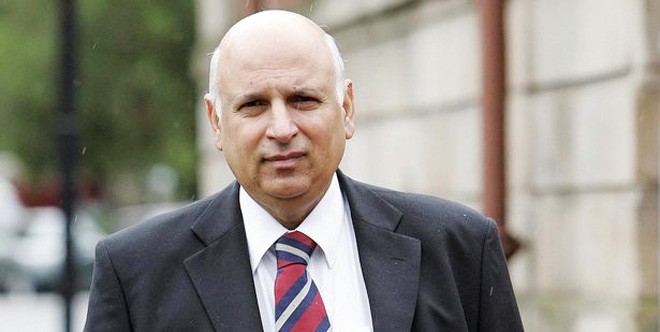 Punjab Governor Chaudhry Mohammad Sarwar has been in eye of the storm for the last several weeks on the basis of allegations by his detractors that the governor of the power base of Pakistani politics has something to do with what’s now known as the ‘London Plan’ -- a reference to the plot weaved in London by PTI’s Imran Khan and PAT’s Dr Tahir-ul-Qadri.

It is a known fact that Imran Khan was present in London during those days when he was speaking to Dr Tahirul Qadri and his associates to finalise plans for the takeover of Islamabad through use of street power. They met in secrecy in central London to agree on the finalities of the plan and shook hands.

When the London Plan was exposed by none other than PTI’s former President Javed Hashmi and several others, arch rivals of Mohammad Sarwar in Britain came into action and spread a well-organised campaign of rumours and vilifications, implying that Sarwar had secretly struck a pact with Imran Khan and Tahirul Qadri and wanted a new role in a set-up not headed by Sharif brothers.

It’s true Governor Sarwar has spoken to Khan and Qadri on several occasions, including around the time London Plan was finalised, but it can be confirmed that Governor Sarwar had nothing to do with the plans. He only shared with the duo his views on Pakistani politics without realising that those sitting around him would then attempt to destroy his relations with Sharifs, who went out of their way to accommodate Mohammad Sarwar, then a British national, as the governor of Punjab.

A group of journalists is said to have been used, egged on by a British Pakistani politician, to create a negative impression of Sarwar with reference to the London Plan, because Sharifs did not entertain him as the governor of Punjab. Instead, they took Sarwar to Pakistan for the symbolic but important post of the Punjab governor.

Sarwar warns that overseas Pakistanis are the lifeline of Pakistan’s economy and everything should be done to encourage them to send more money and invest in Pakistan.

But, Sarwar remains defiant. He’s not the one to go down quietly. He is a politician with a conviction, who learnt the art of political duels in neighbourhoods of Glasgow in Scotland, where he arrived from Faisalabad as a young man.

He decided to stay on to provide for his extended family back home and went on to set up a corner shop. His hard and tough working hours paid off -- he set up a cash-and-carry and other businesses, which currently employ hundreds of people in Scotland and have made Sarwar a multi-millionaire.

His United Grocers has an annual income turnover of around £200 million.

It’s not his success in business that made Sarwar famous: He was the first Muslim parliamentarian in British parliament representing the Labour Party. He worked so hard at the local level that he was returned to the parliament three times.

Now after his retirement, Sarwar’s son, Anas Sarwar, retains the seat with a majority and has been made deputy leader of the Scottish Labour Party. He is counted among the young rising star politicians of Britain.

Sarwar was close to Benazir Bhutto and Nawaz Sharif and helped both of them while they lived in exile. Benazir Bhutto offered him a senior post but he declined but was persuaded by Sharifs to return to Pakistan to become the governor. The decision was based on Mohammad Sarwar’s extensive work in and around Faisalabad in the areas of education and health.

He is a leading member of the highly-influential Arain baradri.

Sarwar has spent a busy life in Britain campaigning for Labour Party as well as for issues related to Pakistanis and Muslims, mainly the issue of Palestine and Kashmir.

So, after becoming the governor, he may have realised that he has a lot of free time to kill and nothing at all to do with the policy matters -- and that has upset Sarwar.

A passionate campaigner who remains accessible to ordinary people in the UK and elsewhere, he went to Pakistan with a zeal to serve Pakistan through hard work and also ensure that problems of overseas Pakistanis are resolved on speedy basis.

Those British Pakistanis who have travelled to Punjab for the resolution of their problems confirm that Sarwar has been accessible to them and has gone out of his way to approach the officials dealing with various civil and criminal cases concerning overseas Pakistanis. But his efforts have been frustrated as the bureaucracy refuses to cooperate. Further, no reforms have been introduced by the Punjab government or any other government to address issues of overseas Pakistanis.

Those who know Sarwar vouch that he is a loyal friend and will stand by his benefactors and even ordinary people in the most difficult of times, and that he has a genuine desire to play an active role in bringing about genuine changes in the lives of ordinary people.

Sarwar was in London last week where he spoke to TNS about his ambitions. "I don’t need money or luxury cars. I came to the UK with nothing and made millions, thanks to the opportunities provided by this country to me. It’s not the privilege that fascinates me. I want to see people happy who have been victims of the system. I want them to feel differently -- see their lives change for the better. Almighty Allah has given me everything. I want to help end the sufferings of our people."

He acknowledged he had made promises to overseas Pakistanis that their problems will be resolved on emergency basis -- but that’s not happening. He said that thousands of overseas Pakistanis in Punjab have their properties usurped, relatives killed and various kinds of cases registered against them by a "corrupt police system", and they have started telling him that they are getting frustrated and nothing is being done for them.

He warned that overseas Pakistanis were the lifeline of Pakistan’s economy and everything should be done to encourage them to send more money and invest in Pakistan. "Doing nothing for them means that Pakistan will be damaged in the long run as they will prefer staying away from a country which doesn’t look after them. That’s why its urgent to address their issues."

Sarwar said he has always aired his views without any fear or favour. "It’s best to be honest than a hypocrite. I speak my mind openly. People whom I meet think the system in general is letting them down. I don’t need to be part to any conspiracy, I just need to be myself."