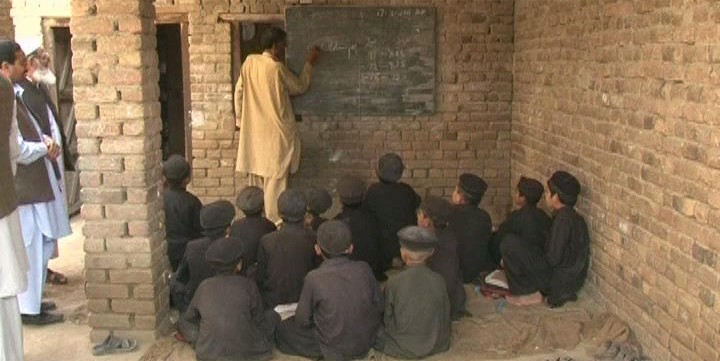 "If we start speaking other languages and forget our own, we would not be we, we would be clones of an alien people; we would be aliens to ourselves" (UNESCO 1958: The use of vernacular languages in education).

The government of KPK, led by Pakistan Tehreek-e-Insaf (PTI), has announced change in the medium of instruction in public schools from Urdu to English w.e.f April 2014.

The arguments put forward for the change in medium of instruction are: a) to bring public schools at par with private schools in the province and; b) to provide uniform education to all the children.

But did the government of KPK take into consideration the following questions? 1) What is the preferred medium of instruction by parents, students and teachers? 2) What is the impact of change in medium of instruction on educational outcomes e.g. completion of primary education cycle? 3) What does international research on the subject tell us about? 4) Do the arguments put forward by the government of KPK hold any substance?

In order to understand the perceptions of stakeholders about their preferred medium of instruction we need to know first about the most commonly spoken languages in KPK. According to the 1998 census, 74 per cent population of KPK speaks Pashto whereas 3.9 per cent speak Seraiki, 1 per cent Punjabi, 0.8 per cent Urdu and 20.4 per cent speak other languages.

A more recent household survey by Annual Status of Education Report (ASER) 2012 shows that the four commonly used languages in the province are: Pashto (77 per cent), Hindko (11 per cent), Seraiki (3.5 per cent), Chitrali (3 per cent) and others (5.5 per cent).

Do parents prefer mother tongue as the medium of instruction in schools?

Research conducted on the subject in Pakistan and especially KPK is testimonial to the fact that parents want their children to be educated in mother tongue. For instance, one of the recommendations of a recent British Council Report, 2012, which was based on a case study in KPK as well as consultations and policy dialogues at national level, was: "There is evidence that many people are strongly attached to their languages and wish to educate their children through those languages" (p. 8).

Most of the primary school teachers are hardly able to speak a sentence in English.

Even primary school students and teachers are opposed to the idea of the government. Last year I visited a girls’ primary school in Peshawar in connection with collecting data for PhD research. The school had two female teachers teaching six grade levels (from katchi/pre-primary to grade 5). The only language the teacher could speak was Urdu whereas the students could not understand Urdu as their mother tongue was Pashto. The students of grade 4 and 5, who were sharing the same classroom, and were being taught by one of the Urdu-speaking teachers complained that due to the language barrier between them their precious learning time is being wasted.

This means that even if the children are in school they are not learning much that is of value. So if the students have problems in understanding a teacher speaking Urdu, one can imagine how difficult it would be for students to understand their teachers when they are speaking English while everyone is aware that most of the primary school teachers are hardly able to speak a sentence in English.

Another question, which is usually ignored in policy discourse, is about the impact of medium of instruction on children’s educational outcomes e.g. their ability to complete primary education cycle (katchi/pre-primary – grade 5). My research on the subject revealed that medium of instruction (Urdu) was negatively associated with primary completion rate during the primary school academic cycle 2007-12 which means that the completion rate decreased by 0.7 per cent during the period as compared to the academic cycle 2002-07.

The shift in policies of the successive governments from Urdu to mother tongue (Pashto) and from mother tongue to Urdu during the two academic cycles is one of the factors in the declining educational outcomes. The decision of the political governments is also manifested in EMIS statistics, for example, the ratio of Urdu versus Pashto medium schools in 2005 was 52:46 which increased to nearly 60:40 after 2007. Hence, the ill-planned policy of the government is increasing the number of out-of-school children in the province.

Now what do the experts on the subject opine?

The researchers argue that the best medium for early education is the language a child already knows and to which a child is naturally exposed in his/her social environment. Their argument is that once a child develops conceptual knowledge in one’s language it helps to make understand another language. Besides, studies also indicate that children, who learn in native languages stay in school longer, do better on tests, and repeat grades less often than students who do not get instruction in familiar language. Furthermore, if we look around the world, English is not the medium of instruction even in developed countries like China, Germany, Japan, Korea, France and Scandinavian countries.

Finally, the KPK government’s argument for the change in medium of instruction, that is, to bring public schools at par with private schools in the province, is also shaky and baseless. It is a misconception that by changing the medium of instruction in public schools from Urdu to English will bring them at par with private schools.

Many factors contribute to improve educational outcomes such as school resources, curriculum, teachers’ motivation, training and accountability, parents’ education and socioeconomic status. Simply changing the medium of instruction will achieve nothing unless all these other variables are addressed as well.

The government of KPK needs to reconsider its decision and take steps for implementation of the decision of the previous government to embed mother tongue as medium of instruction in primary schools across the province.